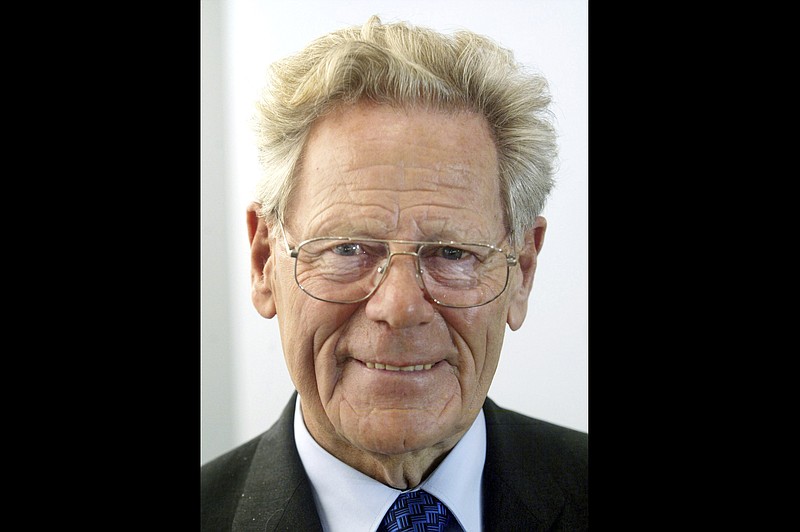 FILE - In this Oct. 6, 2004 file photo, Hans Kueng, attends the Book Fair in Frankfurt, Germany. Hans Kueng, the Roman Catholic theologian who was an early colleague and friend of the future Pope Benedict XVI but later fell foul of the Vatican for challenging church doctrine and became a vocal critic of the pontiff, has died. He was 93. Kueng died Tuesday April 6, 2021, at his home in Tuebingen, according to the Global Ethic Foundation, or Stiftung Weltethos in German, which he established in 1995. (AP Photo/Michael Probst, File)

BERLIN -- Hans Kueng, a Roman Catholic theologian who was an early colleague and friend of the future Pope Benedict XVI but later fell foul of the Vatican for challenging church doctrine and became a vocal critic of the pontiff, has died. He was 93.

Kueng died Tuesday at his home in Tuebingen, according to the Global Ethic Foundation, or Stiftung Weltethos in German, which he established in 1995.

Though forbidden by the Vatican to teach theology, Kueng was an influential voice for liberal Catholics and a prolific author, challenging Catholic doctrines on papal authority, birth control, divorce and other issues.

"He never evaded the important dispute over the right path to peace and understanding," German President Frank-Walter Steinmeier said. "Hans Kueng is a lasting role model of a scholar, a brilliant thinker with a sharp mind who, at the same time, was an alert political observer and a committed fellow-citizen."

Kueng's career was lived in opposition to Benedict and his predecessor, Pope John Paul II, but in retirement Kueng was delighted by "the new reform-friendly atmosphere" inspired by the election of Pope Francis.

The career of the Swiss-born Kueng intertwined with that of Joseph Ratzinger, the future Benedict. Kueng, then a professor at the University of Tuebingen, urged the university's theology department to hire the young Ratzinger in 1966.

The pair participated in the Second Vatican Council in the 1960s as "periti," or advisers. Kueng later wrote that he and Ratzinger were known there as the "teenage theologians," though they were then in their 30s.

Ratzinger left Tuebingen in 1969 after left-wing student upheavals rocked the campus, and his classes were at one point interrupted by sit-ins. Kueng was stripped of the right to teach Catholic theology at Tuebingen in 1979 after challenging Catholic doctrine -- most significantly papal infallibility, which holds that the pope can never be mistaken when he makes "infallible" pronouncements.

Ratzinger, by then a cardinal, was the Vatican's chief guardian of orthodoxy from 1981 to 2005. While Benedict was not at the Congregation of the Doctrine of the Faith at the time Kueng was disciplined, he was reportedly involved in the decision in his role as archbishop of Munich and Freising.

Ratzinger defended the Vatican's treatment of Kueng, saying in his 1997 book "Salt of the Earth" that he respected the path Kueng had taken but that Kueng "should not then demand the church's seal of approval."

Kueng's estrangement from the Vatican took place under Pope John Paul II, and the theologian sharply criticized the Polish-born pontiff's approach to running the church -- though he voiced admiration for the globe-trotting John Paul's wider impact on the world stage.

"There is a blatant contradiction between the foreign policy of this pope and his domestic policy," Kueng told The Associated Press on the 25th anniversary of John Paul's papacy in 2003.

"I find it remarkable how the pope spoke out for human rights, freedom and democracy and especially against the war in Iraq, and also for the dialogue of religions," he said. "But, on the other hand, he represses freedom in the Catholic Church, he supports the inquisition against reformist theologians and bishops. He holds intolerant positions on questions like birth control and abortion."

Two years later, Kueng said of Benedict's election that it was "an enormous disappointment for all those who hoped for a reformist and pastoral pope."

Still, he said the new pope should be allowed 100 days to "learn."

A reconciliation seemed possible in September 2005, a few months after Benedict's election, when the pope granted Kueng an audience.

The Vatican said the two spent several hours together and had a friendly theological discussion -- though they skirted the differences that divided Kueng and the church.

Kueng said they had previously met only once, in Bavaria in 1983, since he was stripped of his license to teach, and that was a "rather tense situation."

But the 2005 meeting was "a very significant event" and a step forward after he spent 25 years asking to see John Paul, he said -- "now I got the impression that he was the same person I knew from the happy Tuebingen years."

However much that meeting may have mended personal fences, Kueng became a vocal public critic of Benedict's traditionalist papacy over the following years.

In 2010, as the church in the pope's German homeland and elsewhere reeled from revelations of decades of sexual abuse of children by clerics, Kueng wrote in an open letter to bishops that Benedict's papacy was increasingly "one of missed opportunities and unused chances."

The church, he said, was "in the deepest crisis of confidence since the Reformation." He faulted the pope, among other things, for failing to reach out more to Protestants and achieve a "lasting understanding" with Jews; stirring mistrust among Muslims with a 2006 speech; failing to help people in Africa combat AIDS by allowing the use of condoms; and failing to push forward the reforms of the Second Vatican Council.

Kueng was irked by Benedict's decision to lift, "without preconditions," the excommunication of four bishops consecrated without papal consent by the traditionalist Society of St. Pius X -- one of them a Holocaust denier whose rehabilitation sparked outrage among Jews and Catholics alike.