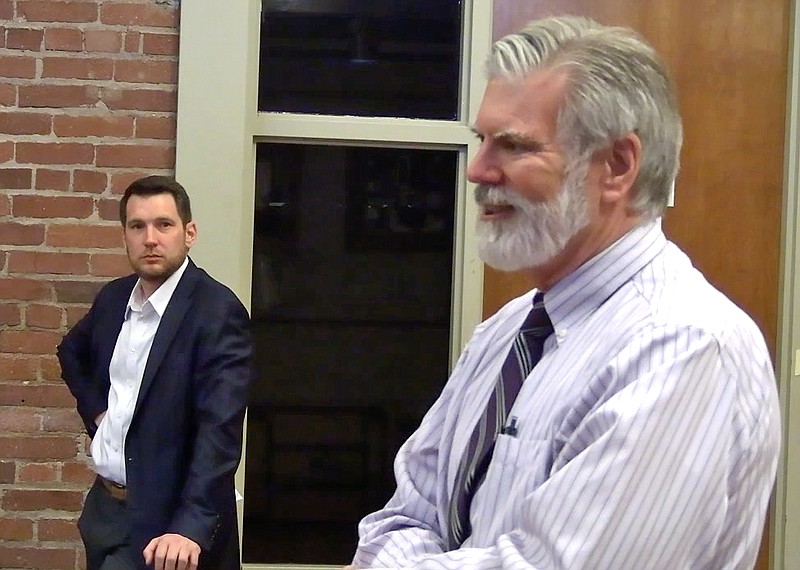 Mayor Pat McCabe addressed the Downtown Association on Tuesday on a variety of topics, including the status of the former Army and Navy General Hospital, short-term rental issues in some neighborhoods, the Majestic Hotel property and masks, now that the statewide mandate has been lifted.

McCabe said he crossed paths with one tourist who told him her community in Kansas had a building that was on federal property that has now been successfully repurposed as a structure for disabled military veterans in their community. He said the city plans to take what insight she provided to The Greater Hot Springs Chamber of Commerce's Committee On the Future of the Army and Navy Hospital.

"The tourist went about telling me how they went about gaining control of the property, which I'm going to get her name today and share it with the committee members, so that they might have -- you know, it might be another avenue to pursue," McCabe said.

"I know we have great people on the committee, but at the same time this is a -- they (the community in Kansas) accomplished something and they might be able to provide a little nugget of information that might allow us to be able to move forward."

Moving on to smaller structures, McCabe said issues with short-term rentals like Airbnbs have been cropping up in some neighborhoods.

Excessive noise, trash and lack of parking caused by guests in the Airbnbs have made for unhappy renters and neighbors.

"At times the short-term rentals are individuals coming in town to have fun and don't always mix well with a neighborhood that's quiet and peaceful and friendly and going to school," McCabe said.

The city is going to attempt to address these issues with a set of published rules estimated to come out May 18.

"I think there is an opportunity to set some rules and provide greater guidance and comfort for both the operator and for the neighborhood," he said. "So we'll continue to work toward that."

In regard to the Majestic Hotel property, McCabe said the city plans to go back out to bid on it.

The Hot Springs Board of Directors is on track to consider issuing a third request for proposals on the property at its April 20 business meeting.

"We're going to look back and see again what is it we want the property to be," he said. "There was a very, very grand plan for that. We're still looking for greatness coming from that property and be an economic driver either as a property itself, or driving people to the downtown area. So that is very, very important to us. We've got one chance to do it right, and we're gonna do it right and we've got to be able to continue to move forward."

Additionally, McCabe said downtown has seen "robust" business over the past few weeks.

"As horrible as COVID-19 was, it allowed other communities to discover or rediscover Hot Springs," he said. "We have not historically gotten a tremendous amount of tourism from the Houston area, and we have seen a number of people from Houston."

With the increase of people downtown has seen, McCabe brought to light some information on where the city stands with masking now that the statewide mandate has been lifted.

The city has followed the lead of the state in not adopting a citywide mask mandate, but he said businesses can decide to require masking, and on all federal property such as Bathhouse Row and the Grand Promenade, masking is mandatory under the federal mandate.