Biden open to compromise on infrastructure, but not inaction 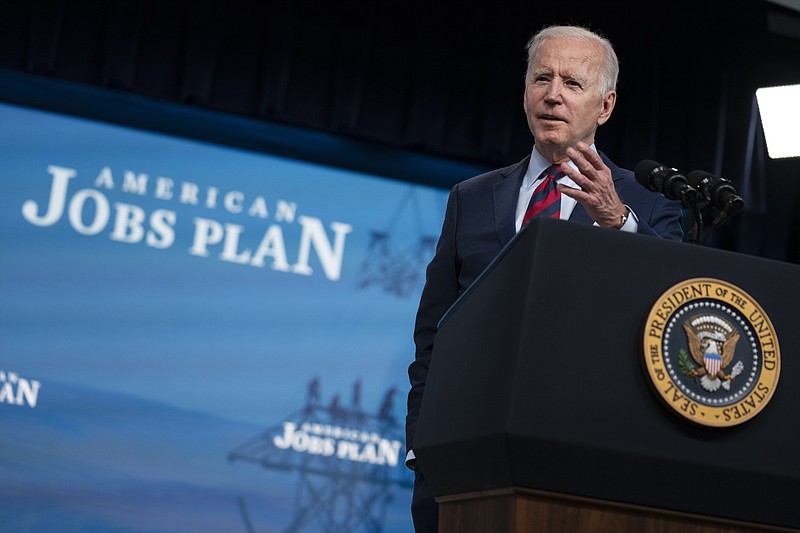 President Joe Biden speaks during an event on the American Jobs Plan in the South Court Auditorium on the White House campus, Wednesday, April 7, 2021, in Washington. (AP Photo/Evan Vucci)

President Joe Biden drew a red line on his $2.3 trillion infrastructure plan Wednesday, saying he is open to compromise on how to pay for the package but inaction is unacceptable.

The president turned fiery in an afternoon speech, saying that the United States is failing to build, invest and research for the future and adding that failure to do so amounts to giving up on "leading the world."

"Compromise is inevitable," Biden said. "We'll be open to good ideas in good faith negotiations. But here's what we won't be open to: We will not be open to doing nothing. Inaction, simply, is not an option."

The president has taken heat from Republican lawmakers and business groups for proposing that corporate tax increases should finance an infrastructure package that goes far beyond the traditional focus on roads and bridges.

"What the president proposed this week is not an infrastructure bill," Sen. Roger Wicker, R-Miss., said on NBC's "Meet the Press," one of many quotes that Republican congressional aides emailed to reporters before Biden's speech. "It's a huge tax increase, for one thing. And it's a tax increase on small businesses, on job creators in the United States of America."

Biden last week proposed funding his $2.3 trillion infrastructure plan largely through an increase in the corporate tax rate to 28% and an expanded global minimum tax set at 21%. But he said Wednesday he was willing to accept a rate below 28% so long as the projects are financed and taxes are not increased on people making less than $400,000.

He stressed that he had been open to compromise on his $1.9 trillion coronavirus relief plan, but Republicans never budged beyond their $600 billion counteroffer.

"If they'd come forward with a plan that did the bulk of it and it was $1.3 billion or four ... that allowed me to have pieces of all that was in there, I would have been prepared to compromise," Biden said. "But they didn't. They didn't move an inch. Not an inch."

The president added that America's position in the world was incumbent on taking aggressive action on modern infrastructure that serves a computerized age. Otherwise, the county would lose out to China in what he believes is a fundamental test of democracy. Republican lawmakers counter that higher taxes would make the country less competitive globally.

"You think China is waiting around to invest in this digital infrastructure or on research and development? I promise you. They are not waiting. But they're counting on American democracy, to be too slow, too limited and too divided to keep pace."

His administration on Wednesday was pressing the case for tax increases. Treasury Secretary Janet Yellen said it was "self-defeating" for then-President Donald Trump to assume that cutting the corporate tax rate to 21% from 35% in 2017 would make the economy more competitive and unleash growth. Yellen said that competing on tax rates came at the expense of investing in workers.

"Tax reform is not a zero-sum game," she told reporters on a call. "Win-win is an overused phrase, but we have a win-win in front of us now."

Yellen said the tax increases would produce roughly $2.5 trillion in revenues over 15 years, enough to cover the eight years' worth of infrastructure investments being proposed.

The roughly $200 billion gap between how much the taxes would raise and how much the administration wants to spend suggests there is space to address critics, such as West Virginia Sen. Joe Manchin, a key Democratic vote, who would prefer a 25% rate.

Commerce Secretary Gina Raimondo said businesses and lawmakers should come to the bargaining table, noting that there could be room to negotiate on the rate and timeline.

"There is room for compromise," Raimondo said at a White House briefing. "What we cannot do, and what I am imploring the business community not to do, is to say, 'We don't like 28. We're walking away. We're not discussing.'"

Key to the Biden administration's pitch is bringing corporate tax revenues closer to their historic levels, rather than raising them to new highs that could make U.S. businesses less competitive globally.

Trump's 2017 tax cuts halved corporate tax revenues to 1% of gross domestic product, which is a measure of the total income in the economy. Revenues had previously equaled 2% of GDP. That higher figure is still below the 3% average of peer nations in the Organization for Economic Co-operation and Development, the Treasury Department said in its summary of the plan.

Still, some say the administration's claim is misleading.

"The administration should use statistics that directly measure the burden on the corporate sector," said Kyle Pomerleau, a fellow at the conservative American Enterprise Institute. "In fact, many measures of effective tax rates show that the U.S.'s burden is pretty close to middle of the road. Biden's plan would certainly push up to the high end among our major trading partners."

Business groups such as the U.S. Chamber of Commerce and the Business Roundtable argue that higher taxes would hurt U.S. companies operating worldwide and the wider economy.

The Penn-Wharton Budget Model issued a report Wednesday saying the combined spending and taxes would cause government debt to rise by 2031 and then decrease by 2050. But following the plan, GDP would be lower by 0.8% in 2050. 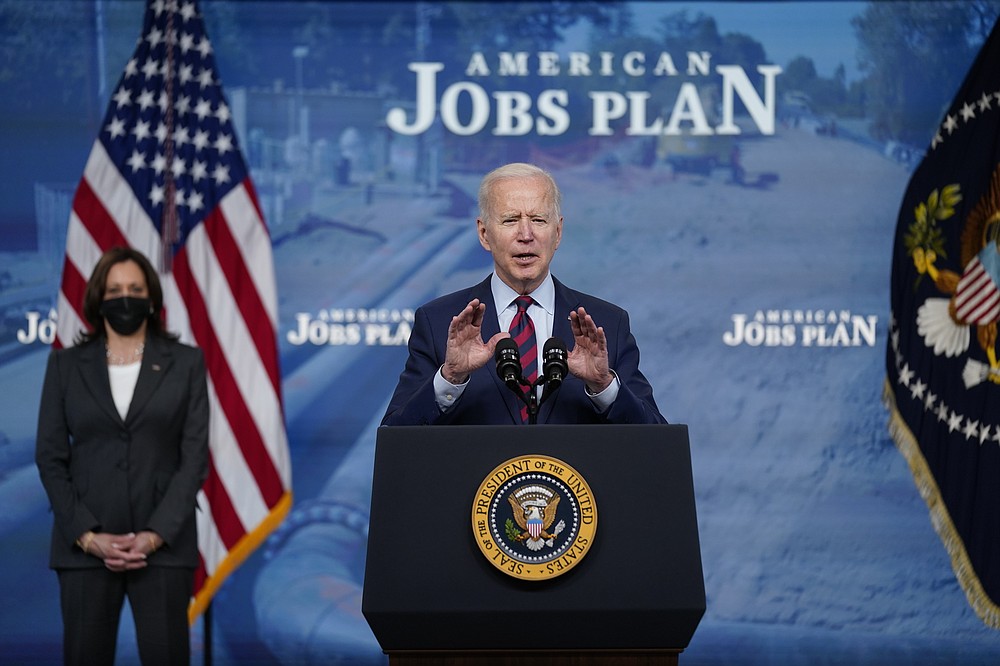 President Joe Biden speaks during an event on the American Jobs Plan in the South Court Auditorium on the White House campus, Wednesday, April 7, 2021, in Washington. Vice President Kamala Harris is at left. (AP Photo/Evan Vucci) 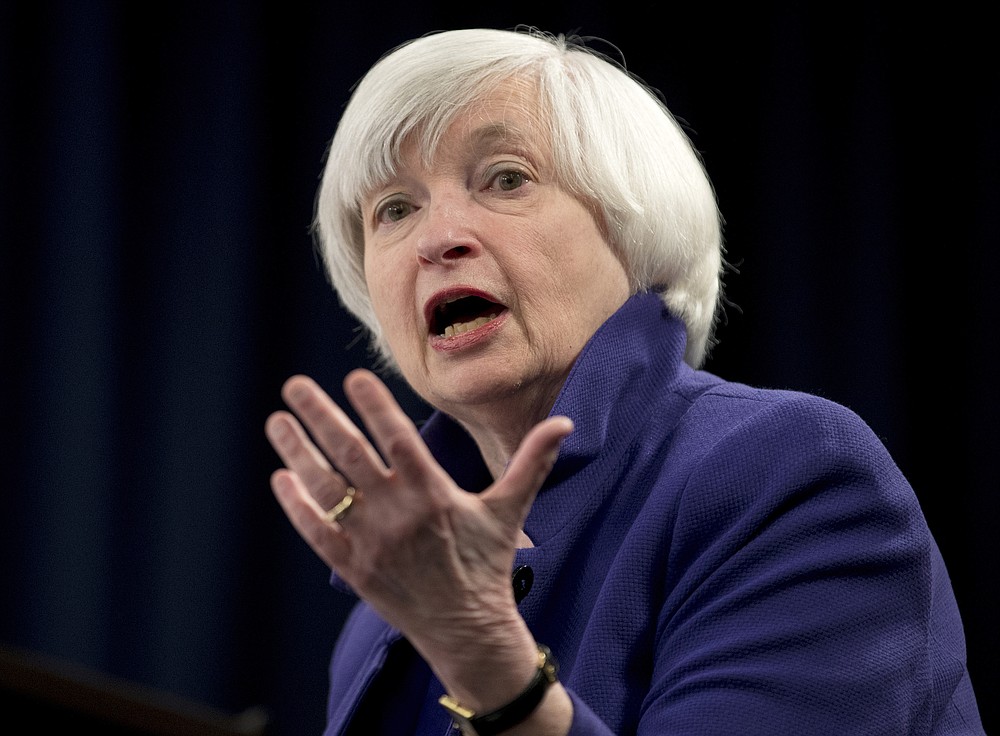 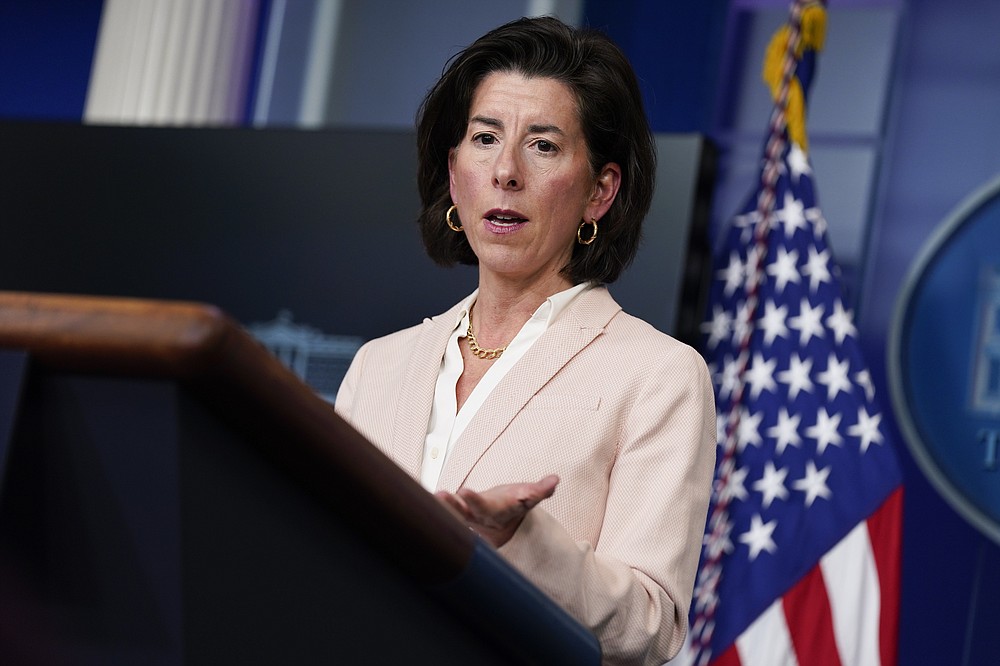 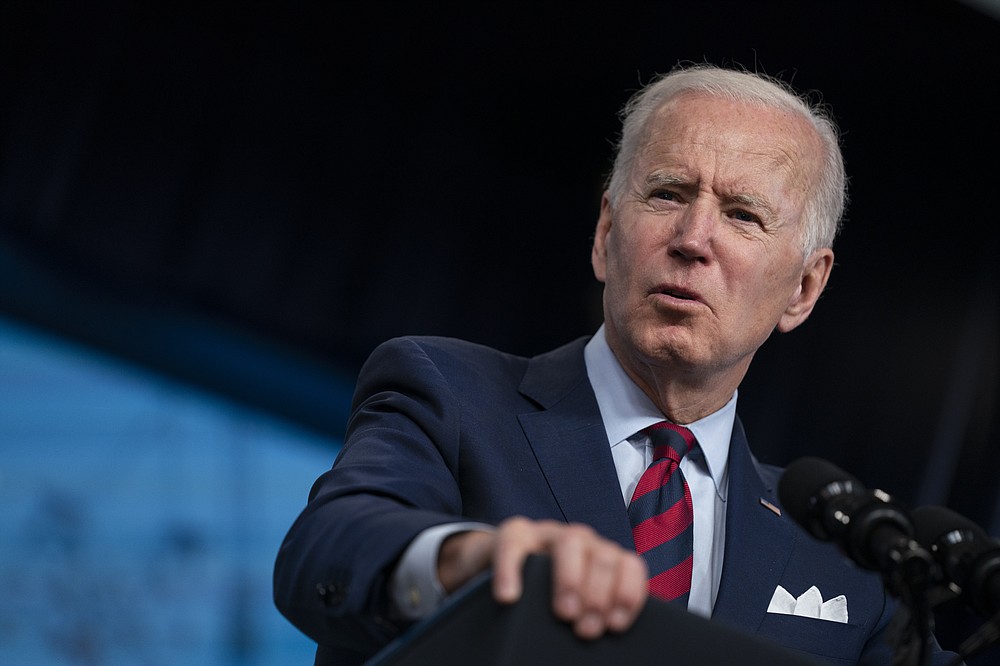 President Joe Biden speaks during an event on the American Jobs Plan in the South Court Auditorium on the White House campus, Wednesday, April 7, 2021, in Washington. (AP Photo/Evan Vucci)
ADVERTISEMENT