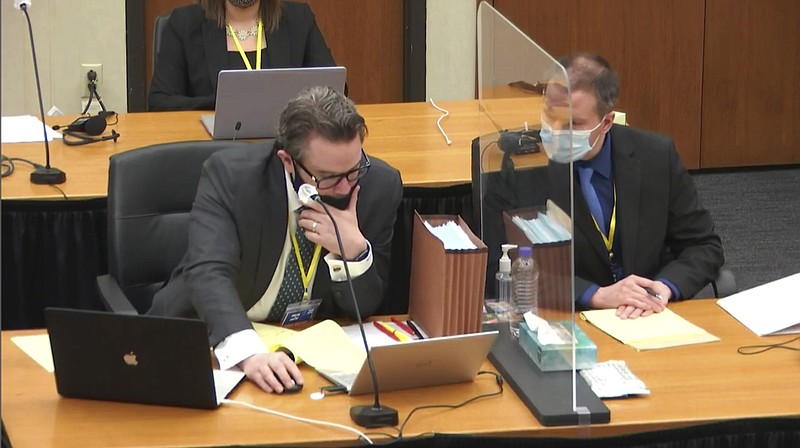 In this image from video, defense attorney Eric Nelson, left, with defendant former Minneapolis police Officer Derek Chauvin, prepares to question a witness as Hennepin County Judge Peter Cahill presides, Wednesday, April 7, 2021, in the trial of Chauvin at the Hennepin County Courthouse in Minneapolis, Minn. Chauvin is charged in the May 25, 2020 death of George Floyd. (Court TV via AP, Pool)

CHICAGO -- Jurors in the trial of a former Minneapolis police officer charged in George Floyd's death have spent the week listening to testimony from leaders of the city's department and national experts on use of force.

On Wednesday, testimony briefly touched on a phrase that has become a short-hand description for the type of police interactions that spur protests and demands for change in cities across the U.S.: "Lawful but awful."

HOW DID IT COME UP IN THE TRIAL?

Jody Stiger, a Los Angeles Police Department sergeant, served as a prosecution witness on use of force by police. Stiger testified on Wednesday that the force Chauvin used against Floyd was excessive based on his review of video evidence.

Chauvin's defense attorney, Eric Nelson, later asked Stiger about police uses of force sometimes being described as "lawful but awful," including in a training presentation Stiger has used. Nelson reversed the phrase once to "awful but lawful," as did one of the prosecuting attorneys.

Stiger conceded that "you can have a situation where by law it looks horrible to the common eye, but based on the state law, it's lawful."

But legal observers said the phrase's meaning is more precise than that exchange suggested.

WHERE DID IT COME FROM?

The phrase doesn't seem to have a long history.

Chuck Wexler, executive director of the Police Executive Research Forum, said he can't take credit for coining the idea and heard it used by other experts.

But the Washington, D.C.-based think tank on policing used the term in a widely-read 2016 report recommending more training and de-escalation strategies to prevent officers from having to use force, popularizing the term.

Wexler said the phrasing refers to shootings that meet the conditions laid out in a 1989 Supreme Court decision, allowing police to use force they see as reasonable. So, a shooting can be deemed legal and still be objectively awful for everyone involved.

Wexler and his organization consider the Supreme Court's parameters to be "the floor, not the ceiling" and have called for police policies and training to go beyond it, particularly in encounters with people who are mentally ill and not armed with a gun.

WHAT DOES IT MEAN?

Wexler said "lawful but awful" refers to the circumstances and the outcome of an officer's decision to use force, not how the officer's actions appear to the general public.

"These are situations where the police go to someone's house and someone's in crisis," he said. "The outcome is a tragedy for everyone -- for the family and also for the police officer who doesn't want to take someone's life."

Peter Moskos, a professor at John Jay College of Criminal Justice and a former Baltimore police officer, said the "lawful but awful" distinction isn't likely to enter into police officers' shop talk. Police are more likely to use terms like "good" or "bad," meaning justified or not after a coworker fires on someone.

"The lawful part is based on, would a reasonable officer see an imminent threat at the time they pulled the trigger?" Moskos said. "Lawful but awful takes the context into it a bit more."

The concept also has been applied to topics outside policing, including drone warfare and legal industries like gambling or tobacco that can cause broad harm.

WILL IT HELP CHAUVIN'S DEFENSE?

Nelson has argued that Chauvin followed his training and he has suggested that the illegal drugs in Floyd's system and his underlying health conditions are what killed him, not Chauvin's knee. His broad suggestion that a police officer's actions could be seen as "awful" while still being lawful fits into that argument.

But prosecutors have relied on some of the most experienced members of the Minneapolis department, including the police chief, to testify that Chauvin's actions were excessive and contrary to his training and departmental policy.

Jurors historically have believed officers' accounts of their actions during violent or fatal accounts, but legal experts have questioned whether Chauvin can make that argument. Prosecutors have repeatedly emphasized that Chauvin used his knee to pin Floyd's neck to the ground for more than 9 minutes.

Wexler said that's why the "lawful but awful" concept "doesn't apply at all" to Chauvin's case.

"Lawful but awful happens when you have some kind of situation where the officer feared for their life," he said. "That didn't happen here ... that's why this case is different. This is a man on the ground, handcuffed with his face down with someone with his knee on him for nine minutes." 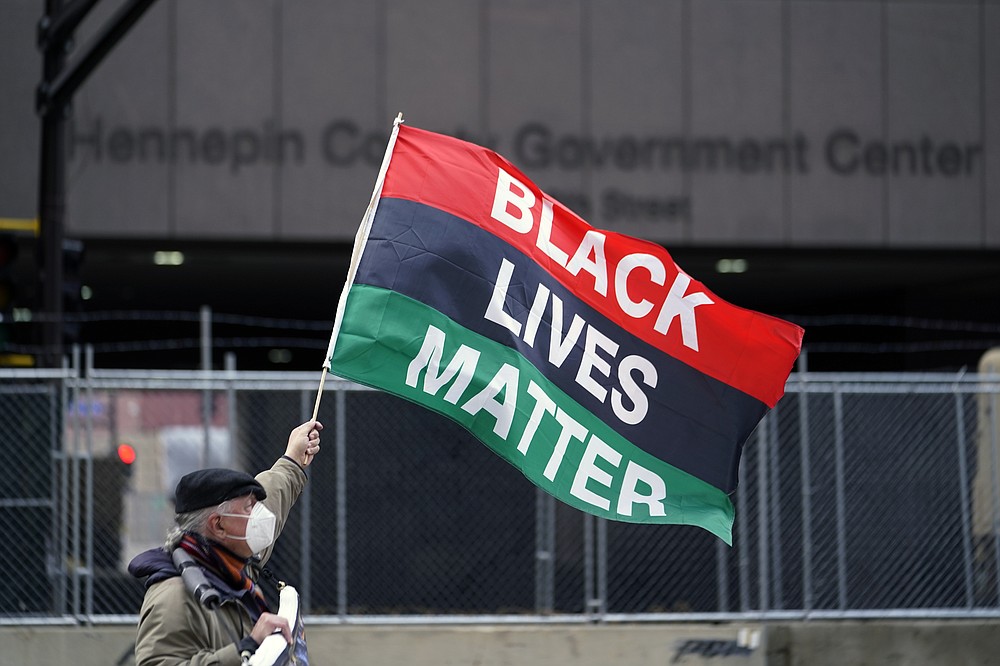 A protesters waves a Black Lives Matter flag across the street from the Hennepin County Government Center, Wednesday, April 7, 2021, in Minneapolis where testimony continues in the trial of former Minneapolis police officer Derek Chauvin continues. Chauvin is charged with murder in the death of George Floyd during an arrest last May in Minneapolis. (AP Photo/Jim Mone) 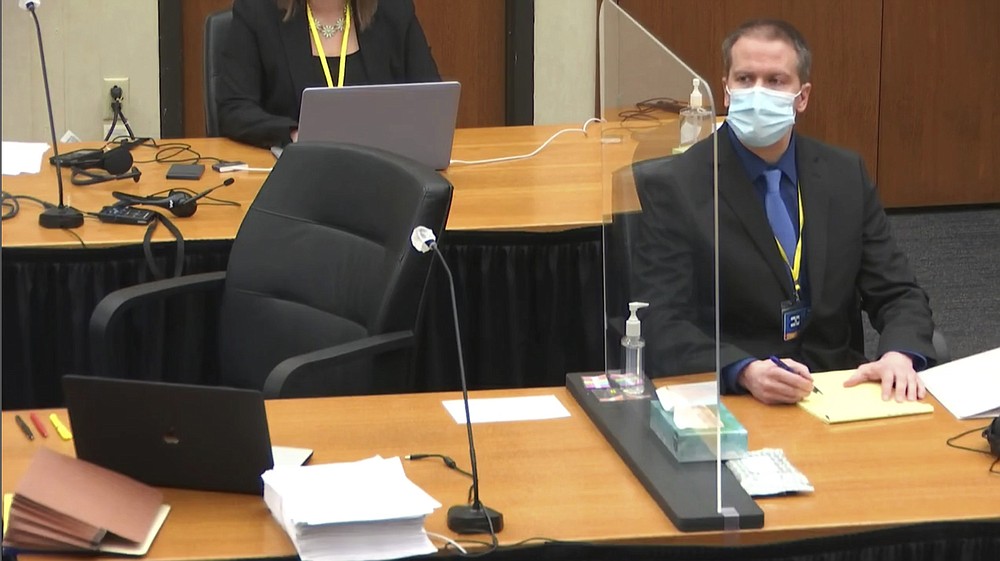