EXPLAINER: Winter Olympics and some options 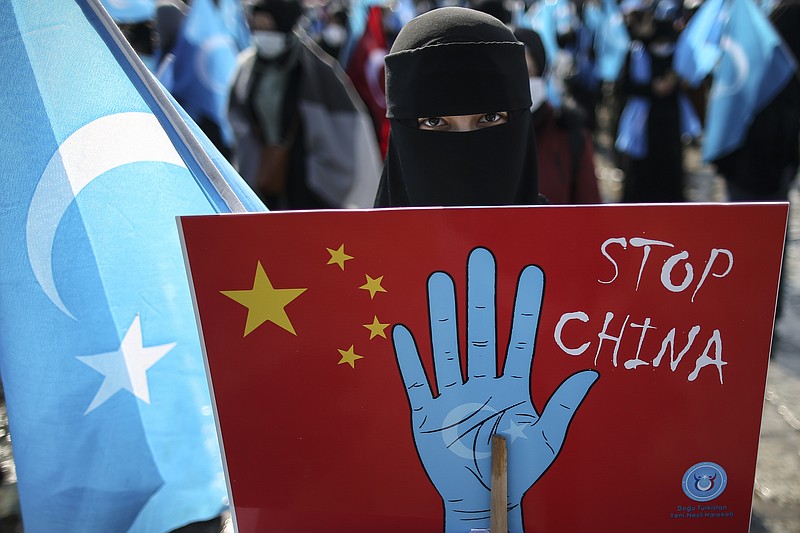 A protester from the Uyghur community living in Turkey holds up an anti-China placard during a protest against the visit of China's Foreign Minister Wang Yi to Turkey, in Istanbul, Thursday, March 25, 2021. Hundreds protested against the Chinese official visit and what they allege is oppression by the Chinese government to Muslim Uyghurs in the far-western Xinjiang province. Photo by Emrah Gurel via The Associated Press

The U.S. State Department says it's talking with allies about China's human rights record and how to handle next year's Beijing Winter Olympics.

A department spokesman on Tuesday suggested that an Olympic boycott to protest China's rights abuses was among the possibilities. But a senior official said later that a boycott has not yet been discussed.

Human rights groups are protesting China's hosting of the games, which open on Feb. 4, 2022. They have urged a diplomatic or straight-up boycott to call attention to alleged Chinese abuses against Uyghurs, Tibetans and residents of Hong Kong.

Activists are also reaching out to national Olympic committees, athletes and sponsors after failing to get the Switzerland-based International Olympic Committee to move the games out of China.

Beijing is the first city to win the right to host both the Summer and Winter Olympics. The 2008 Beijing Olympics were held with the hope of improving human rights in the country.

POSITION OF IOC AND CHINA

President Thomas Bach says the IOC must stay out of politics, although it holds observer status at the United Nations and Bach has touted his own efforts to unite the two Koreas at the 2018 Winter Olympics in Pyeongchang, South Korea.

"We are not a super-world government where the IOC could solve or even address issues for which not the U.N. security council, no G7, no G20 has solutions," Bach told a news conference last month. He has repeated the IOC must stay "neutral."

China's government warned Washington on Wednesday not to boycott, saying there would be an unspecified "robust Chinese response."

"The politicization of sports will damage the spirit of the Olympic Charter and the interests of athletes from all countries," Foreign Ministry spokesperson Zhao Lijian said. "The international community, including the U.S. Olympic Committee, will not accept it."

In March, Zhao said a boycott is "doomed to failure."

ACTIVISTS HAVE MET WITH THE IOC

Activists met late last year with the IOC and asked for the 2022 Olympics be moved. They also asked to see documents the IOC says it has in which China gave "assurances" about human rights conditions. Activists say the IOC has not produced the documents. The virtual meeting was headed by IOC member Juan Antonio Samaranch Jr., who oversees preparations for Beijing. His father was the long-time IOC president.

Frances Hui, director at We The Hongkongers, suggested there was a condescending tone from the IOC in the meeting.

"The first thing we heard is: 'It's a very complicated world.' And I asked again: How are you going to legitimatize a games that's based in a country practicing genocide and murdering? Again the reply to me was it's a complex world."

Activists are talking about softer forms of a boycott, but have not ruled out the kind of boycott led by the United States in the 1980 Moscow Olympics; 65 countries stayed away, including China, and 80 participated.

"I think a diplomatic boycott would be very much welcomed by all of our communities. We have been looking towards accountability, and that is definitely part of that path toward accountability," said Zumretay Arkin, spokeswoman for the World Uyghur Congress.

"Of course the athletes, it's unfair to them. But athletes also have a conscience, an opinion of their own," she added.

WHAT WOULD BOYCOTT ACCOMPLISH?

Bach, who won a gold medal in fencing in the 1976 Games, was deprived of going to Moscow in 1980 as a member of the West German team. He opposes a boycott, which would also severely hurt the IOC's finances and its image.

The IOC earns 91% of its revenue from selling broadcast rights and sponsorships and has seen its income stalled by the postponed Tokyo Olympics.

The United States Olympic and Paralympic Committee has also questioned the effectiveness of boycotts.

But it's one of the few leverage points activists have.

"Before we called for a boycott, we hoped that the IOC could strip China of hosting the Olympics, but they didn't want to do that," said Teng Biao, an exiled Chinese human-rights lawyer and activist. "I think the Olympics is a thing the Beijing government cares very much about. We should not give up that chance."

Teng also welcomed athletes and other participants to protest if the Olympics take place -- with social media posts, by wearing descriptive T-shirts, or by skipping the opening ceremony.