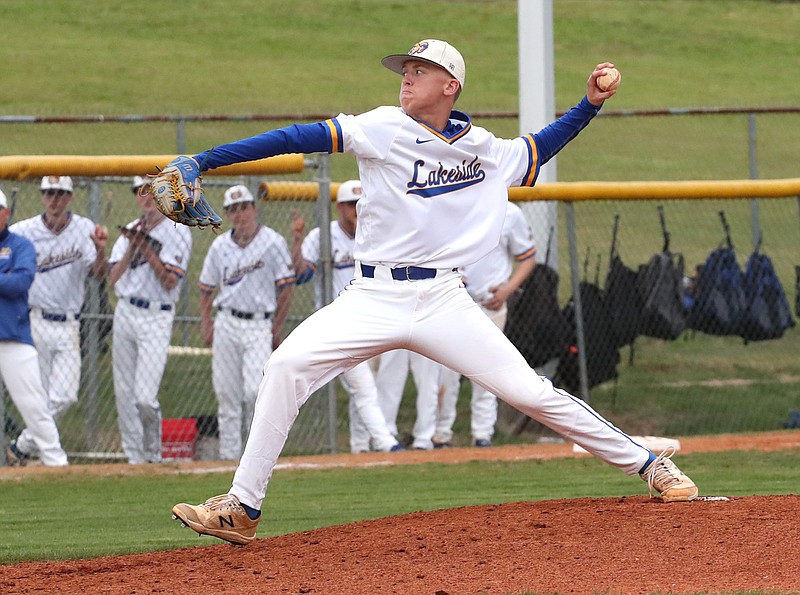 Lakeside pitcher Wyatt Gobson (22) throws a pitch during action against Texarkana on Tuesday at Lakeside. - Photo by Richard Rasmussen of The Sentinel-Record

Outstanding Athlete of the Week: Senior pitcher/shortstop Peyton Ballard. Ballard picked up a 7-4 win over Sheridan on April 1, pitching 6 1/3 innings with four strikeouts and one walk while allowing two earned runs.

Bock's plans for this week: "We need to finish games -- too many late-run innings."

Outstanding Athlete of the Week: Sophomore catcher Violet Mendez. Against Two Rivers, Mendez, playing through injury, laid down two bunts to move runners into scoring position as well as made a huge out at home from behind the plate.

Key opponent this week: "Lamar is a big game this week with a heavy upper classmen team who have played a lot of ball, as well as Dover." -- Lions head coach Ryan O'Neal

O'Neal's plans for this week: "Working on fielding a lot of ground balls and and making solid contact with hitting."

This week's games: Friday at Texarkana at 5 p.m., Tuesday at White Hall at 5 p.m.

Outstanding Athlete of the Week: Senior Carson Harris. Harris pitched 6 2/3 innings against Pine Bluff, recording 10 strikeouts and only two walks for the win.

Key opponent this week: Texarkana. "They are very talented and we are also in a three-way tie for first with them and Lakeside." -- Wolves head coach Matt Weigand

Weigand's plans for this week: "We've struggled to score runs as of late, but a couple of key guys are starting to heat up again."

Outstanding Athlete of the Week: Senior Braydon Radley. Radley is batting .666 and recorded three runs and three stolen bases last week while striking out five in four innings and allowing only one earned run from the mound.

Plans for this week: "We need to limit our fielding errors and overcome ourselves." Red Devils head coach Joseph Alderman

Outstanding Athlete of the Week: Sophomore Wesley Campbell. "We called on Wes last week against DeQueen to come in early in the game (second inning) to help get us out of a jam. He pitched really well and finished the game for us" - Fountain Lake head coach Hayden Thornton

Key opponent this week: Bauxite. "They are currently first and undefeated in conference. They are a solid team with a tough guy on the bump in Dawson Goins" -- Cobras head coach Hayden Thornton