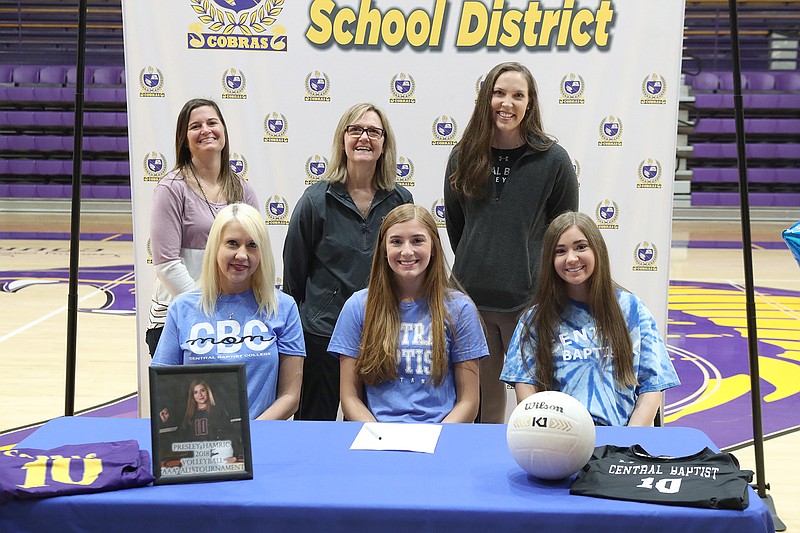 Hamric will play right-side hitter for CBC, an NAIA school in Conway that competes in the American Midwest Conference.

Hamric, who plans to major in psychology next fall at CBC, expressed thanks to her family, friends and coaches who helped support her.

Irwin, the Lady Mustangs second-year head volleyball coach, is familiar with Hamric, having coached her in club volleyball the past few years.

"Presley was always very coachable and always had a good attitude and always did whatever I asked her to do," she said. "And so, at the time, I still playing in college and coaching club volleyball and, even from a coaching perspective, when I was younger playing in college, I knew that she had a lot of potential, and I just loved her and her family. They're just good people. So when I got to CBC, it was like, 'OK, let's just continue this on and have her play for me here if she wants to,' and I'm glad that she did."

Hamric admitted that her relationship with Irwin helped draw her to CBC.

"Well I really, really love coach Stephanie," she said. "I've had a great relationship with her, and I know that she just started the program at CBC, and she's been doing really great things. So I'm excited to go to a program that I think we'll be able to build each year and get better and better. And I know next year's going to be a really good year for us, and so I'm really excited for that."

Fountain Lake head volleyball coach Tina Moore said that what impressed her most about Hamric was her tireless work ethic.

"Her work ethic from the beginning -- she jumped in and did everything," she said. "She played basketball, and she had a fabulous basketball career at the same time as trying work on her volleyball skills and playing club volleyball and traveling. So the time that she has put in is amazing, I mean, that's what's made her skill set what it is.

"She definitely developed into a very skilled player and one that people really had to take notice and defend because she was so powerful as far as scoring, and made such an impact. The right side (position) is such a different position, and people don't usually put a lot of power into that as a scoring position, but with her being a 'true right side,' it gave us just that much more depth as far as hitting and scoring. So Presley did a great job developing that position."