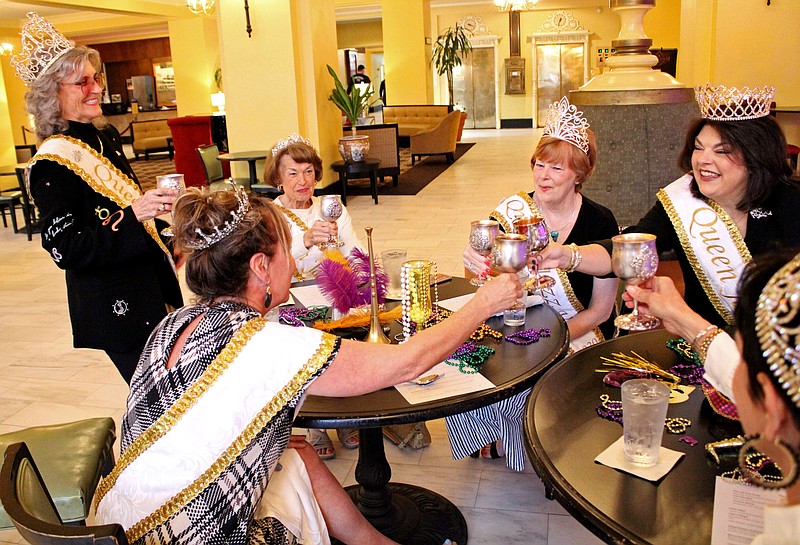 The Royal Order of Queens, back, from left, Sharon Turrentine, Sunny Evans, Peggy Holt, Dana Gooch and Laura Gehriki, toast their newest member, Beth Gipe, front, left, during their annual luncheon at the Arlington Resort Hotel & Spa on Wednesday. - Photo by Tanner Newton of The Sentinel-Record

Two months after the season has passed, the Hot Springs Jazz Society's Mardi Gras Royalty Royal Order of Queens finally held their annual luncheon at the Arlington Resort Hotel & Spa to welcome the newest of the group.

The luncheon is held each year to introduce and honor the new queen and start the festivities for the Mardi Gras season, but, because of the pandemic, the luncheon was postponed and the Jazz Society's annual fundraiser, the Mardi Gras Ball and Costume Contest, did not even take place.

Her Royal Highness Sharon Turrentine, Queen Jazz II, said that due to COVID-19, the luncheon was rescheduled, then postponed again to April 7 due to inclement weather.

"Every year in February, before our ball" the group holds the luncheon "to kick off Mardi Gras season," Turrentine said.

"We know the season is over, but we're not missing a chance to wear a crown," Turrentine said.

Each year, the Royal Order of Queens adds a new member to the "very, very exclusive club." Only one member is added per year, a news release said.

This year's queen is Her Royal Highness Beth Gipe Queen Jazz IX. Gipe is the ninth queen to join the group, and will also be the 10th queen next year. Each queen gets to lead the Hot Springs Jazz Society Mardi Gras Ball, and since this year's was canceled, Gipe will also serve as the 2022 queen.

"I think it's a huge honor," Gipe said shortly after being crowned. "It's a fun group of ladies."

Gipe said she has been a supporter of the Jazz Society for years, and always dresses up for the Mardi Gras Ball. At past balls, she has dressed up as a baby and last year she was dressed as Tippi Hedren's character from "The Birds."

"I've always been the one to dress up, now I get to be pretty," Gipe said.

In addition to wearing a crown and sash, Gipe was also presented with an engraved goblet. Each member gets their own goblet, and each of the six in attendance for the luncheon proceeded to use their goblets during lunch.

The Jazz Society also crowns a Mardi Gras King, and in 2021 and 2022 it will be Gipe's husband, Richard Gipe.

The purpose of the Jazz Society, according to the release, is to encourage the performance, promotion, preservation and perpetuation of jazz, an original American art form.

The festival was canceled last year, due to the pandemic, but Turrentine said it will return this year.

"We will have JazzFest," Turrentine said, noting it will feature two stages and stretch over three days. 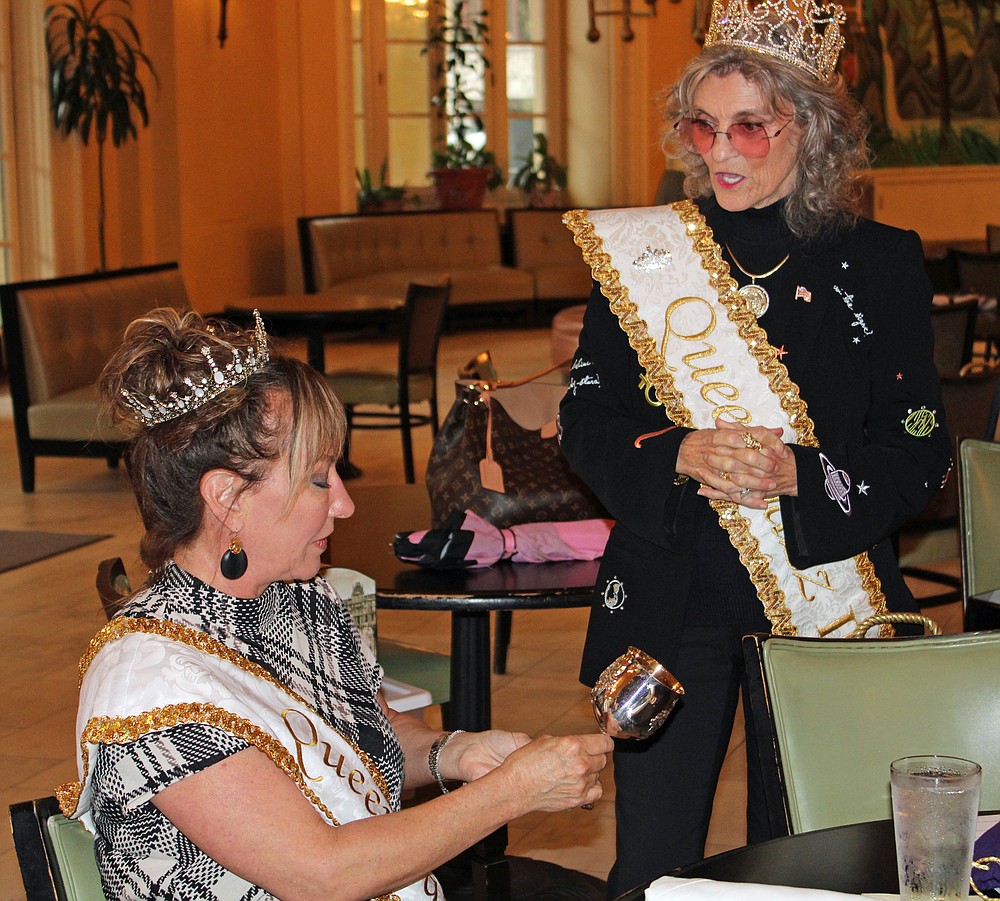 er Royal Highness Beth Gipe Queen Jazz IX, left, is presented with her engraved goblet Wednesday during the annual luncheon of the Hot Spring Jazz Society Royalty by H.R.H. Sharon Turrentine QJII in the lobby of the Arlington Resort Hotel & Spa. - Photo by Tanner Newton of The Sentinel-Record
ADVERTISEMENT