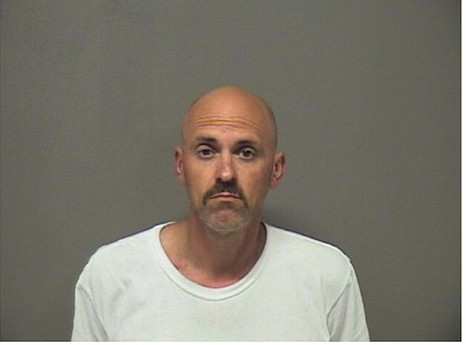 A local man being sought on felony and misdemeanor warrants for allegedly attacking another man and destroying his insulin pump last month was arrested Tuesday on multiple charges after a brief standoff with Hot Springs police.

Michael Shane Duchac, 40, of 605 Quapaw Ave., was taken into custody at his residence shortly before 1:30 p.m. on a felony charge of first-degree criminal mischief over $5,000, punishable by up to 10 years in prison, and misdemeanor counts of third-degree battery, resisting arrest, disorderly conduct and two counts of harassment.

Duchac was later released on an $8,000 bond and is set to appear on April 29 in Garland County District Court.

According to the probable cause affidavits and a victim statement, on March 21, a local man was visiting a friend who lives on Quapaw across the street from Duchac's residence.

The man states he saw Duchac sitting on his porch and having met him before walked over to greet him. As he and his friend walked up into Duchac's yard, Duchac went back into his house.

They approached the porch and the man's friend knocked on the door to have Duchac come outside. Duchac allegedly came out and started asking the man's friend "why he was bringing a cop to his house" while pointing at the man.

The man told police, "I responded to Duchac that I was not a cop but I believe Duchac was on a substance and didn't recognize me." He noted Duchac was "not acting like himself" based on previous encounters.

As the man came closer to the porch, Duchac reportedly jumped down and punched him, knocking him to the ground where he struck his head on a brick on the side of the porch. The man noted his face made contact with the brick "causing a laceration on my outer left eyebrow."

Duchac then jumped on the man's back and began punching him in the back of the head, causing two more cuts. Duchac finally ran back inside his house.

The affidavit notes the man lost his Medtronic MiniMed external insulin infusion pump, valued at $7,899. The man said Duchac pulled the pump from his person, where it was attached to his abdomen with a hose.

The man went to a local hospital for treatment of the injuries he sustained from the assault and from the loss of his medical device. The man reported the incident to police and noted his missing device.

Police went to Duchac's residence to look for the device but could only find the bottom cover of the pump on the sidewalk directly in front of the house. The man later identified the cover as coming from his device.

On March 28, the man's friend was working outside in his yard when Duchac reportedly came outside and yelled at him, "Here's your cop friend's listening device" and then threw the insulin pump across the street to the friend's yard. The affidavit notes the device was "found to be beyond repair."

Warrants were later issued for Duchac for third-degree battery and the felony criminal mischief charge.

On Tuesday, around 12:15 p.m., police responded to an assault in the 500 block of Quapaw in which a man reported being slapped by a man he knew as "Shane." Officers arrived to find a woman and Duchac in an active physical fight in front of Duchac's house.

As officers approached, Duchac ran into his residence and locked himself inside. The woman told officers Duchac had struck her in the face, causing her to fall on the ground, and then "stomped on her." Officers also made contact with the caller who stated it was Duchac who had slapped him right before he started fighting the woman.

The affidavit notes no visible injuries were observed on either the male or female victim, but both wanted to pursue charges. A computer check also revealed the earlier warrants for Duchac.

Officers made multiple attempts to speak to Duchac and convince him to come outside, but he refused. At one point, he opened his front door to retrieve a dog that was tied to the porch, but then fled back inside as officers attempted to apprehend him, deploying a Taser unsuccessfully.

After multiple additional attempts to convince Duchac to come out, he finally exited the residence and was taken into custody without further incident.