Survey: Even as schools reopen, many students learn remotely 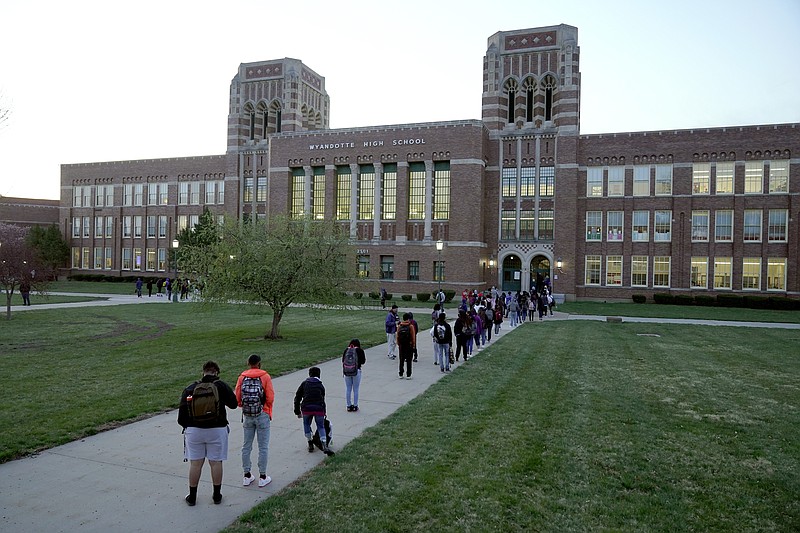 FILE - In this Wednesday, March 31, 2021, file photo, students wait to enter Wyandotte County High School in Kansas City, Kan., on the first day of in-person learning. The district was one of the last in the state to return to the classroom after going virtual due to the COVID-19 pandemic. (AP Photo/Charlie Riedel, File)

Large numbers of students are not returning to the classroom even as more schools reopen for full-time, in-person learning, according to a survey released Wednesday by the Biden administration.

The findings reflect a nation that has been locked in debate over the safety of reopening schools during the coronavirus pandemic.

Nearly 46% of public schools offered five days a week of in-person learning to all students in February, according to the survey, but just 34% of students were learning full time in the classroom.

The gap was most pronounced among older K-12 students, with just 29% of eighth graders getting five days a week of learning at school.

With the new findings, President Joe Biden came no closer to meeting his goal of having most elementary schools open five days a week in his first 100 days. School offerings were nearly identical to what was reported a month before.

But among eighth grade students, there was a slight shift from fully remote to hybrid learning.

Speaking at a coronavirus briefing on Wednesday, White House COVID-19 adviser Andy Slavitt described the findings as a step forward.

"This is encouraging early data covering the month of February that shows progress toward the president's goal to have K-8 schools open five days a week," Slavitt said.

It's based on data from schools in 37 states that agreed to participate. This is the second round of data released from a survey started by the Biden administration to evaluate progress in reopening schools.

The data capture a month that saw building momentum in the push to reopen schools.

In February, the Centers for Disease Control and Prevention declared that schools could safely reopen with masks, social distancing and other precautions.

Since then, schools have continued to reopen as more teachers get vaccines and as some states loosen social distancing requirements.

More recent estimates from the data service Burbio found that, as of Sunday, more than 55% of K-12 students were back in the classroom full time.

As in January, the new federal data showed dramatic disparities based on region and race. In the South, slightly more than half of all fourth graders were learning entirely at school in February, an uptick from the month before.

In the same period, by contrast, the Northeast saw a decrease in the rate of students learning in the classroom five days a week, from 23% to 19%.

Overall, more than a third of students in the South and Midwest were learning entirely at school, compared with less than a quarter in the West and Northeast, according to the survey.

White students continued to be far more likely to be back in the classroom, with 52% of white fourth graders receiving full-time, in-person instruction.

By contrast, less than a third of Black and Hispanic fourth graders were back at school full time, along with just 15% of Asian students.

The results do not indicate whether students are learning remotely by choice or because their schools do not offer an in-person option.

The mismatch between what schools are offering and what students are getting is at least partly explained by big urban districts that have been slow to offer in-person options.

But it's clear that at least some students are opting to stay remote even after their schools reopen classrooms.

In New Mexico, where all school districts were expected to be open for in-person learning this week, some students stayed back.

Among them was 14-year-old Jonathan Chilton, a freshman in Santa Fe, who watched class from his laptop on Tuesday while around half of his district attended in-person.

He was reconsidering his choice, though, after dealing with internet issues and a teacher who was split between two audiences.

"Before it was like -- she was just sitting down and talking to everyone," Jonathan said.

"We try to understand what she's saying sometimes because, like, it lags when she's in the classroom."

The survey's findings around race align with previous findings from some of the nation's largest school districts, where Black students have returned at far lower rates than their white classmates -- a disparity that's believed to come down at least partly to trust.

Advocates say more must be done to convince parents that their children will be safe in school, especially Black families who have been disproportionately affected by the coronavirus.

Although wide racial disparities persisted in the new round of data, the Education Department saw a glimmer of hope in a slight increase among Black students learning fully in-person.

"Although white students continue to enroll in full-time in-person instruction at higher rates, we are beginning to see shifts toward full-time in-person learning for other groups," said Peggy Carr, an associate commissioner at the agency's National Center for Education Statistics.

Parents across the U.S. have been conflicted about a return to the classroom, expressing concerns about the virus but also about learning setbacks as their children learn remotely, according to a poll from The University of Chicago Harris School of Public Policy and The Associated Press-NORC Center for Public Affairs Research.

Worries about learning setbacks were slightly more prevalent than fears of spreading the virus at school, the poll found.

The department also reported progress in bringing more students with disabilities back to school.

Among Black and white students with disabilities in the fourth grade, fewer were learning remotely in February than in January, according to the survey.

The survey for the first time collected data on how many teachers have received COVID-19 vaccines, but the findings revealed little.

More than half of schools said they did not know how many teachers got at least one shot.

Of those with data, just 6% said that between 81% and 100% of their teachers had received a vaccination.

New estimates released by the CDC on Tuesday, however, found that nearly 80% of K-12 employees and child care workers had received at least their first shot by the end of March.

Biden said he was pleased with the achievement, even though it fell short of his goal to deliver at least one shot to every teacher, school staff member and child care worker in March.

Coronavirus vaccines have not been approved for children under 16.

For the first time, the latest round of survey data also included attendance rates for each type of teaching offered in February.

Nationwide, the survey found that attendance rates were around 90% for all modes of learning.

There were slight differences by race, especially at the eighth grade level, where Black students had attendance rates about 5 percentage points below white students in each mode of learning. 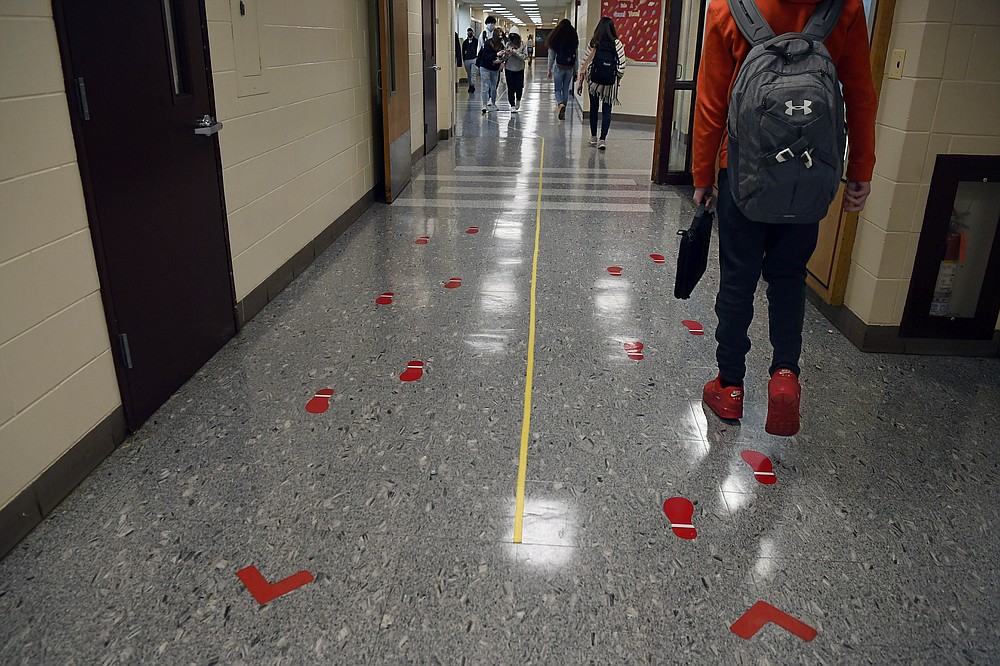 FILE - In this March 18, 2021, file photo, students stay distanced and in separate lanes when passing between classes at Windsor Locks High School in Windsor Locks, Conn. A new survey from the Biden administration finds that large numbers of students are not returning to the classroom even as more schools reopen for full-time, in-person learning. (AP Photo/Jessica Hill, File) 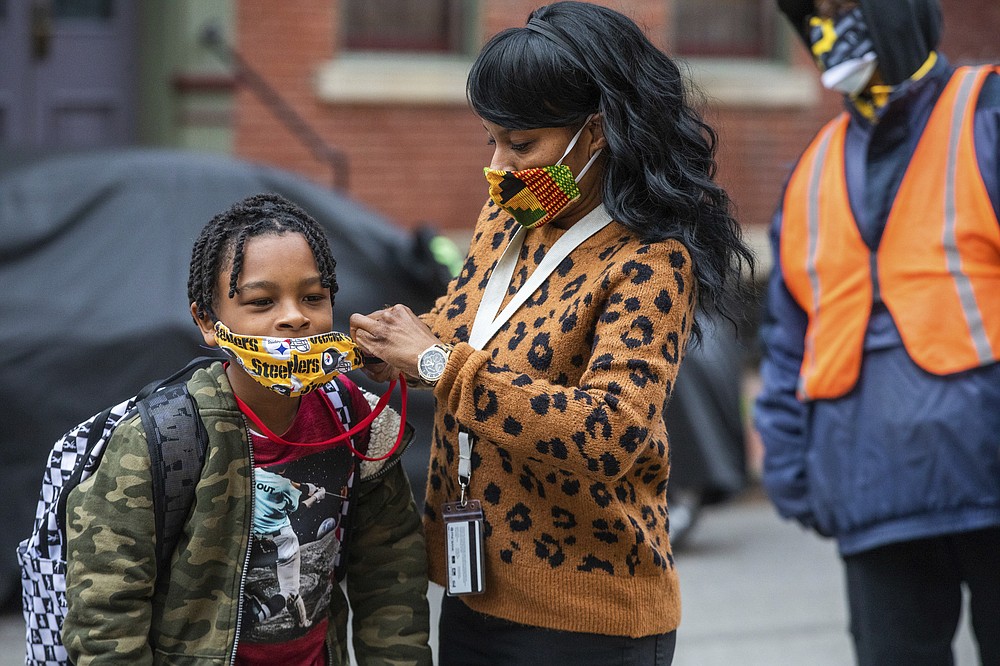 FILE - In this Monday, March 29, 2021, file photo, Jenea Edwards, of the North Side, helps her son Elijah, 9, in the third grade, with his mask before heading into Manchester Academic Charter School on the first day of in-person learning via a hybrid schedule, in Pittsburgh. A new survey from the Biden administration finds that large numbers of students are not returning to the classroom even as more schools reopen for full-time, in-person learning. (Andrew Rush/Pittsburgh Post-Gazette via AP, File) 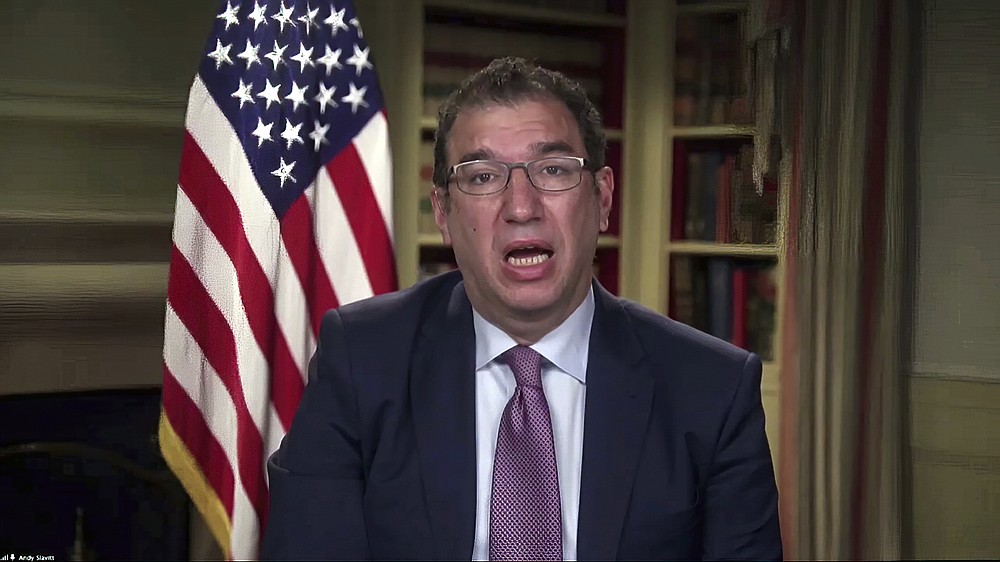 In this Jan. 27, 2021, image from video, Andy Slavitt, senior adviser to the White House COVID-19 Response Team, speaks during a White House briefing on the Biden administration's response to the COVID-19 pandemic in Washington. The government is expanding COVID-19 vaccine access to all federally qualified community health centers. White House COVID-19 adviser Andy Slavitt announced the development Wednesday, April 7, which will increase opportunities for underserved communities to get the shot. (White House via AP) 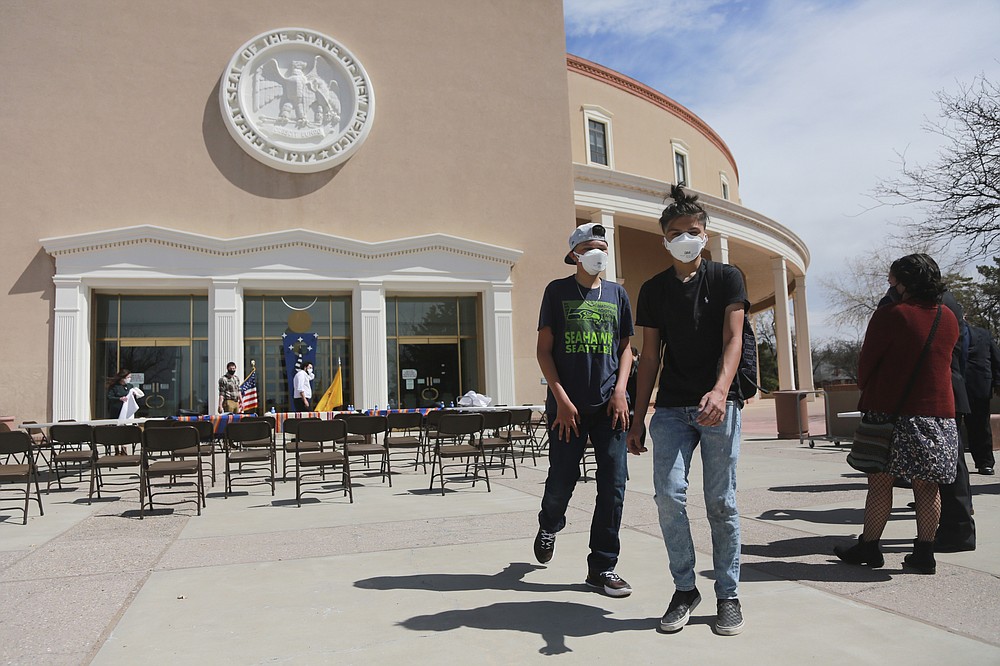 In this Monday, April 5, 2021, photo Jonathan Chilton, 14, center right, stands in front of the New Mexico state capitol ahead of a bill signing by the governor in Santa Fe, N.M. Chilton started school remotely on Tuesday following the Easter break. Around half of his classmates are now studying in-person, and he's not sure if he should go back with just a few weeks left in the semester. (AP Photo/Cedar Attanasio) 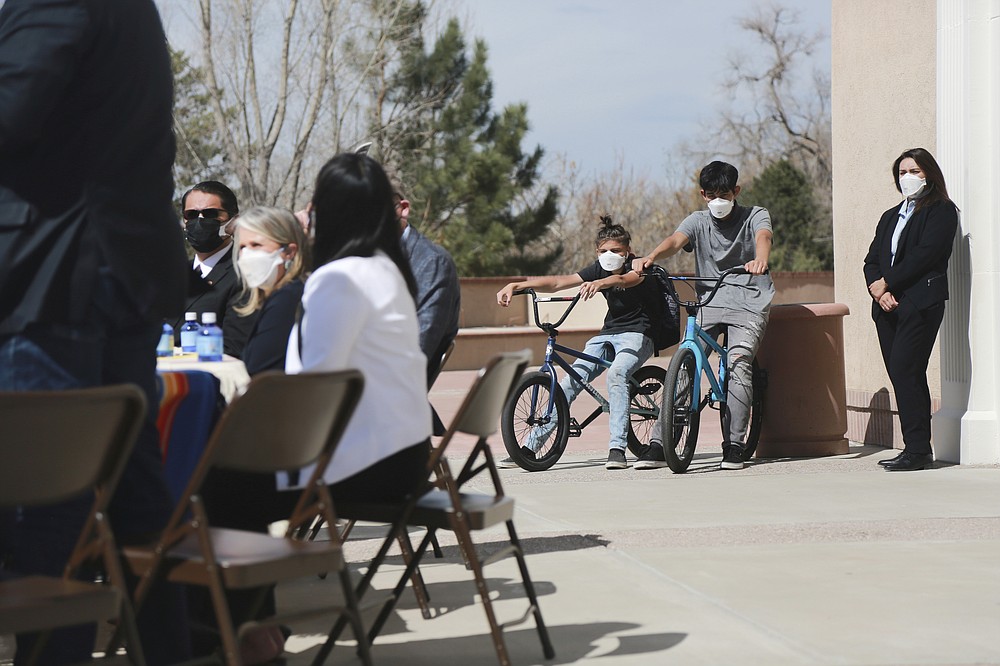 In this Monday, April 5, 2021, photo Jonathan Chilton, 14, center, sits on his BMX bike in front of the New Mexico state capitol ahead of a bill signing by the governor in Santa Fe, N.M. Chilton started school remotely on Tuesday following the Easter break. Around half of his classmates are now studying in-person, and he's not sure if he should go back with just a few weeks left in the semester. (AP Photo/Cedar Attanasio) 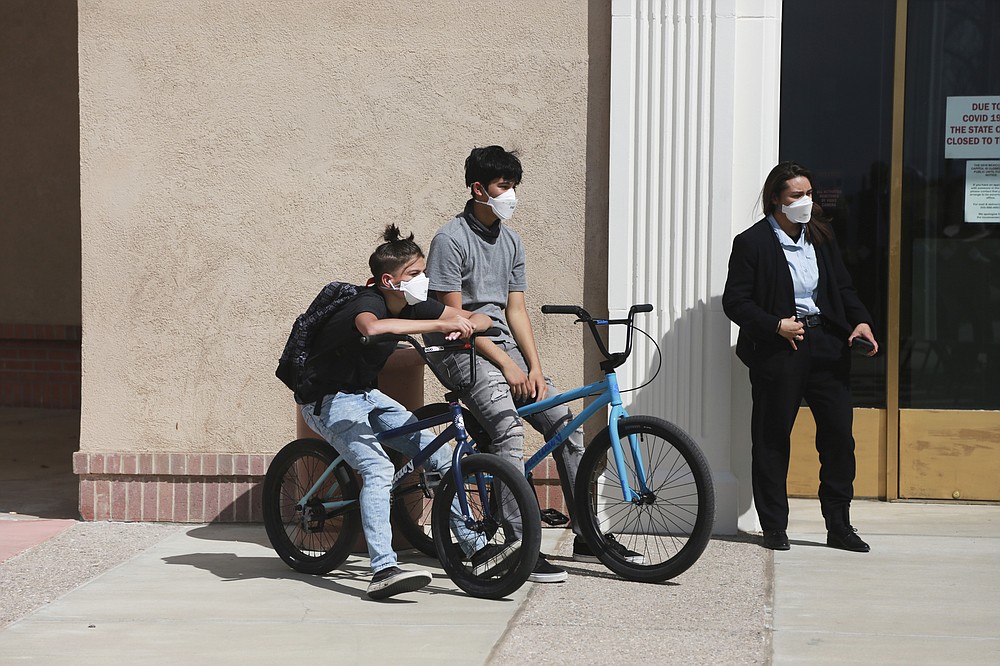 In this Monday, April 5, 2021, photo Jonathan Chilton, 14, left, sits on his BMX bike in front of the New Mexico state capitol ahead of a bill signing by the governor in Santa Fe, N.M. Chilton started school remotely on Tuesday following the Easter break. Around half of his classmates are now studying in-person, and he's not sure if he should go back with just a few weeks left in the semester. (AP Photo/Cedar Attanasio)
ADVERTISEMENT