Getting by slowly, but with resolve 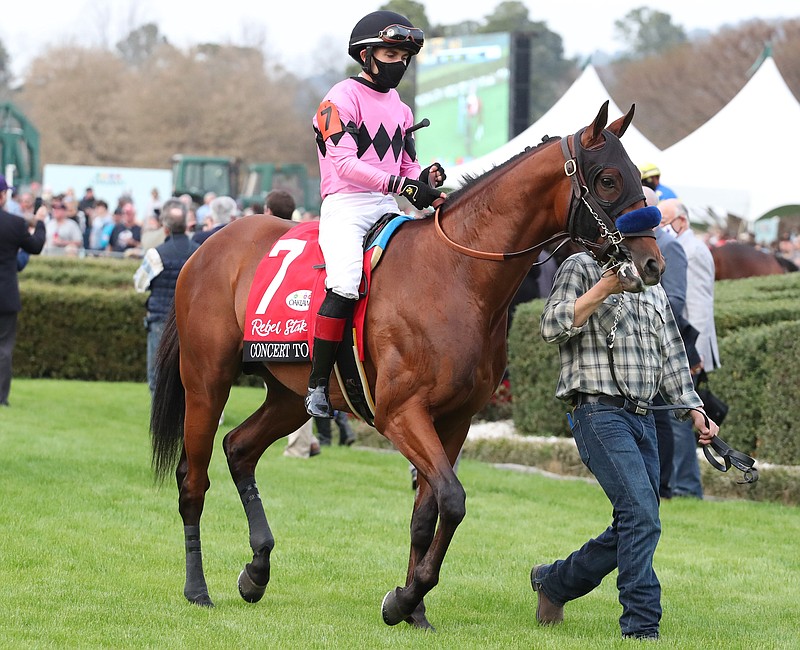 Jockey Joel Rosario and Arkansas Derby favorite Concert Tour head out to the track on March 13 prior to winning the Rebel Stakes at Oaklawn. - Photo by Richard Rasmussen of The Sentinel-Record

With it having been 47 years since I stepped through the doors of Oaklawn Park and became enchanted by the bugler's sound, learning that time stands still in a racetrack, but for the horseplayer, as with Scarlett O'Hara in "Gone With the Wind," tomorrow is another day.

With a trusted adult family friend from Glenwood, I took in the April 6, 1974, racing program. Then a freshman at Harding College, naive beyond all imagination, I listened to the late Chic Anderson, in what would be his next-to-last Oaklawn season before Terry Wallace's Victorian reign in the broadcast booth, call the races.

I don't recall eating a corned-beef sandwich, the track's signature concession, but kept one pledge to my folks, that, though perfectly legal, I would not bet on the races. That no matter what good feeling I had about J.R.'s Pet in the Arkansas Derby, I would keep my thoughts -- and money -- to myself.

Mostly, I watched the people, more than 50,000 -- a record, they said -- the equivalent of a War Memorial Stadium football crowd crammed into the back of a station wagon. I dared not move, lest I become separated from my escort. I don't remember buying so much as a program and have no recall which horses won what I would come to regard as undercard races. One horse might have broken down; I chalked that up as stuff happening at a racetrack.

Finally, the Arkansas Derby horses were called to the post. As before an Arkansas-Texas football game, my heart raced.

My hunch about J.R.'s Pet proved accurate, that under Darrel McHargue, then one of the nation's top riders, he ran down Silver Florin late. That Arkansans owned the top two horses and that- they might have Kentucky Derby aspirations mattered not personally. That the winning owner, Cal Partee of Magnolia, would someday become the first Arkansan to own a Kentucky Derby winner and that I would write about it seemed equally implausible.

For one day at the races, this was enough. And so we returned to Glenwood and I the next day to Searcy, where on that Monday night I shouted as radio announcer99 Milo Hamilton relayed the news from Atlanta: "There's a new home-run champion in baseball ... and it's Henry Aaron."

The Arkansas Derby would become soon enough the most anticipated event on my sports calendar. One after one, the winners came -- Promised City, in 1975, with Larry Spraker, who piloted Swift Ruler a decade earlier, becoming the first to ride and train an Arkansas Derby winner, a distinction he still holds. Years later, Spraker and I would talk about it outside the paddock, and I would visit the South Moore Road farm of Promised City's jockey, David Whited. "Horse country," I would call the stretch of western Garland County land on which many horsemen live and near which I now reside.

This is written two days before what, under optimum conditions, would be my 42nd consecutive Arkansas Derby as a turf writer. One that with even only six horses I await fondly, hoping that Arkansan John Ed Anthony, whose Temperence Hill won the first Arkansas Derby (1980) I covered for The Sentinel-Record, would win his fourth with Caddo River, named for the body of water that flows through, and at times has flooded. my hometown.

I question CR's ability to run a mile and eighth, all in one day, but he is in good hands and needs a win or a second to send Anthony to Louisville in three weeks for the Kentucky Derby, the one Triple Crown race that has escaped the lumberman from Bearden who lives in Hot Springs.

Because of health concerns that have slowed me, I may not be able to attend Saturday's program. Rest assured that I will be there in spirit -- hey, one hears that Gabby and Brittney, along with some other TVG on-air celebrity whose name I do not know, are coming -- and that if I can work out the bugs on a new laptop computer, I will be in action on oaklawnanywhere.com.

And with luck, you will read about the race in Sunday's edition under a story carrying my byline. The great Jim Murray lost an eye to cancer -- nothing nearly so bad for me -- but kept writing. "Carmen has been announced," he explained one day in print, "and Carmen will be presented."

No Carmen am I, merely happy to be in the same profession as the sainted Murray, whose hand I shook in the old Churchill Downs pressbox on a Derby Day. Sometimes even in the brotherhood of second-guessers, the sportswriters' union, you have to take one for the team. My team plays at 300 Spring St. Call me day-to-day.