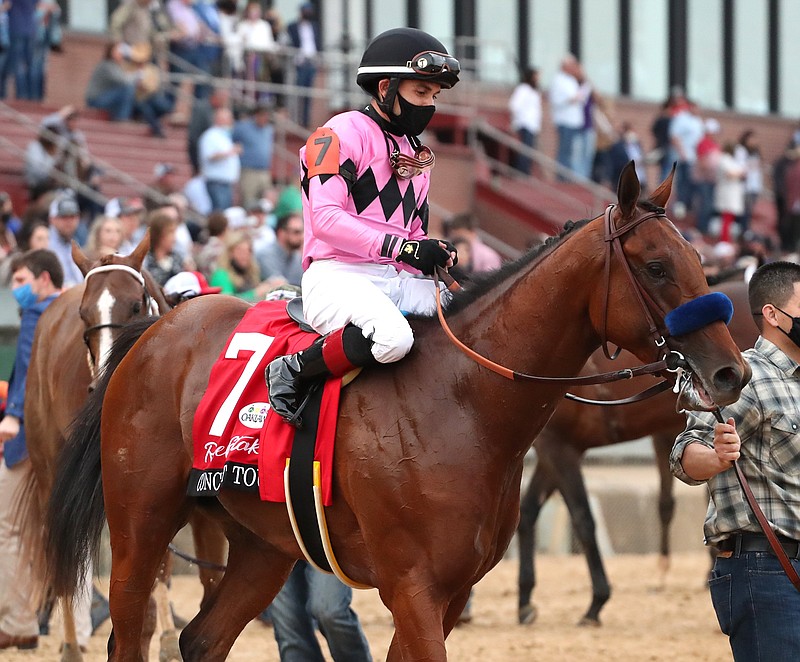 Jockey Joel Rosario and Concert Tour are led into the winner’s circle after the Rebel Stakes at Oaklawn Racing Casino Resort on March 13. Concert Tour is the expected favorite for the Arkansas Derby scheduled for Saturday. - Photo by Richard Rasmussen of The Sentinel-Record

Thursday of Arkansas Derby week at Oaklawn brought a Kentucky Derby news flash from another front that the May 1 race at Churchill Downs is losing a major contender.

Greatest Honour, a multiple graded winner in Florida for Shug McGaughey, has an ankle problem and will be out of training 60 days, said the Hall of Fame trainer.

McGaughey called it an exercise-induced condition that may alter the structure of a bone, one that will keep the Tapit colt in the field and under tack for 30-day segments.

"It's not anything we've got to operate on," McGaughey told Louisville-based website Horse Racing Nation. "He just needs a little bit of time. He's a little banged up, and we'll give him that. Hopefully we'll come back, and maybe we'll have him for Saratoga."

Greatest Honour faded as a Kentucky Derby contender after a non-threatening third-place run in the March 27 Grade 1 Florida Derby. Before that, he ranked high on Derby checklists with Gulfstream Park triumphs this winter in the Grade 3 Holy Bull and Grade 2 Fountain of Youth. Training Greatest Honour for Courtlandt Farms of Donald and Donna Adam, McGaughey won the 2013 Kentucky Derby with Stuart Janney III's and Phipps' Stables' Orb,

Meanwhile in Hot Springs, six 3-year-olds in the Arkansas Derby continued preparations for the Grade 1 $1 million race Saturday. Five including race winner Concert Tour exit the Grade 2 Rebel March 13 and another from the Grade 3 Southwest Feb. 27 at Oaklawn.

Unbeaten in three starts for Hall of Famer Bob Baffert, Concert Tour led from gate to wire in the mile-and-sixteenth Rebel, the first race around two turns and outside California for the Street Sense colt owned by breeders Gary and Mary West. Concert Tour earned 50 qualifying points for the Kentucky Derby in the Rebel and because of an injury to Life Is Good and poor starts by others in his barn has become Baffert's main Derby contender.

The Arkansas Derby offers 100 qualifying points to the winner with 40, 20 and 10 to the next three finishers. A victory Saturday by Concert Tour likely would make him a co-favorite with unbeaten juvenile champion Essential Quality three weeks from now in Kentucky. Essential Quality (5 for 5) has paired victories in the Southwest and last week's Grade 2 Blue Grass at Keeneland, where the Tapit colt won the Breeders' Cup Juvenile and another Grade 1 race last fall.

Baffert entered another horse at Oaklawn with Hozier earning 20 Derby points with his Rebel second. The Pioneerofthe Nile colt looms as a strong second choice in the betting to Caddo River, Jan, 22 winner of Oaklawn's Smarty Jones mile for trainer Brad Cox but a well-beaten fifth as the Rebel favorite. With 10 points, Caddo River (by Hard Spun) probably needs an exacta finish to make the Kentucky Derby, in which Cox also has Essential Quality. Hot Springs lumberman John Ed Anthony bred and owns Caddo River, who bids to become his fourth Arkansas Derby winner since 1980.

Also in Oaklawn's oldest race, dating to 1936 and nine furlongs, are Rebel fourth-place finisher Super Stock, trained by Hall of Famer Steve Asmussen; Got Her Number, a Grade 1 winner in California for trainer Peter Miller but no threat when seventh in the Rebel, his 3-year-old debut; and Last Samurai, an expected longshot owned by Willis Horton of Marshall and trained by Dallas Stewart. Fifth in the Rebel, Last Samurai's strongest selling point may be Stewart's knack of producing Kentucky Derby board surprises.

Baffert and Asmussen each has three Arkansas Derby victories, Baffert scoring last year with Rebel victor Nadal, Charlatan gave Baffert an apparent sweep of both divisions –- the race was split after pushed back to May 2 because of the coronavirus pandemic – before disqualified after flunking a drug test. Though Nadal was subsequently retired because of an injury, Baffert tied a record with his sixth Kentucky Derby victory when Authentic won the first September running.