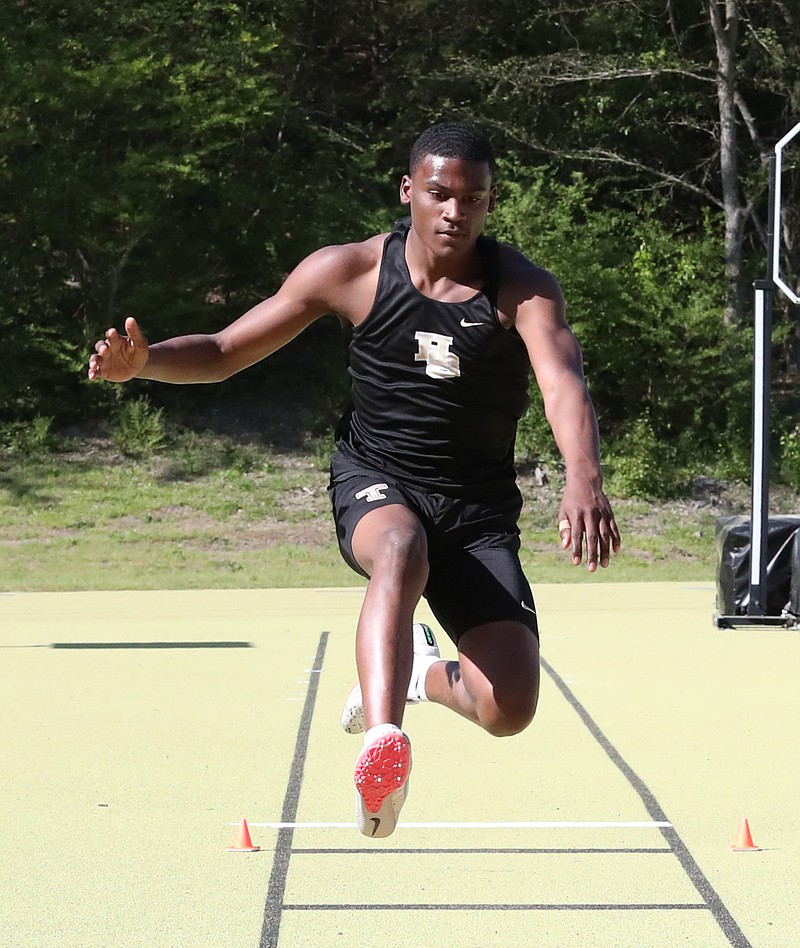 Hot Springs ran away with the win at the Joe Reese Relays Thursday afternoon at Tommy J. Holt Stadium.

The Trojan boys put up 214 points to win the event while LISA Academy North came in second with 122 points. Only four teams competed at the relays after three teams pulled out of the event, including Mountain Pine.

LISA Academy North won the girls side of the meet with 95 points, Hot Springs trailed with 78.

Tyrell Lambert, whose triple-jump distance of 45 feet, 1.5 inches is among the top in the state, had a bit of an off day, the junior admitted after winning the event with a distance of 41 feet, 9 inches.

"I could have done way better, way better than what I did," he said. "Today, I'm not saying I was lacking, but I wasn't full speed like I was supposed to be, and that was a mess-up for me. I'll bounce back from what I did today -- get better."

While there were only four competitors in the event due to the lack of teams participating, Lambert said that the lack of competition was not the reason for his sub-par performance.

"It wasn't the lack of -- the lack of competition," he said. "It was just my body language from long jump carried over to triple jump. It made me have a bad day over here."

Teammate Blake McLelland dominated in the 400-meter dash, outpacing teammate Pierce Smalley in second by just under three seconds, and he earned himself a new personal record.

"I knew I had a chance to come out here and win it," McLelland said. "I looked at the entries, and I was favorite. So I just tried to just run my own race and not think about anything else. And it's at home, of course, so I felt more comfortable, and so everything worked out."

McLelland appeared to struggle at the start, but he quickly found his pace and worked his way to the front of the pack.

"Our coach always says, 'Take off on the curve, not like a full sprint, but our momentum carries,' and that was my focus," he said. "Because I knew if I made the gap up with the person laying in front of me, I knew I'd have a good pace. So I just focused on the curve and just tried it out the rest of the way."

"We almost got the state qualifying time in the 4x100," he said. "The guys, they competed. The biggest thing is that's what we want to watch -- compete. We had some schools kind of bail out on us right before the meet, so we kind of threw some adversity at our guys. We made them go through a football workout and weight room before they come out here, just to see how they were going to handle the adversity. All the guys that run track play football, so it's gonna help us one way or another. But they competed.

"You know, some guys probably came in knowing they was gonna win some events, but you never should think like that. And if you do think like that, you're supposed to dominate the event. You're not just supposed to barely win, so everything we're doing here is a teachable moment."

Burnett was glad to see the teams that did come out to compete, despite the lack of numbers overall.

"Glad the schools came," he said. "You know, it's a COVID year, so we wanted to limit the teams to seven or eight. So when you've got three or four teams back out on you, you're stuck with a few, but it don't matter. We get reps. We're blessed to be alive and competing. This time last year we was at home, trying to figure out what the world was going to do."