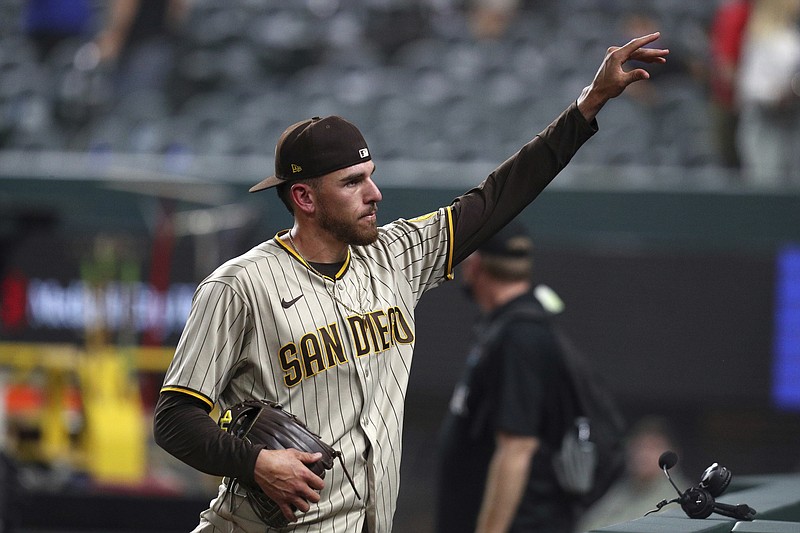 San Diego Padres starting pitcher Joe Musgrove gestures to fans after pitching a no-hitter against the Texas Rangers in Friday's game in Arlington, Texas. - Photo by Richard W. Rodriguez of The Associated Press

ARLINGTON, Texas -- San Diego Padres right-hander Joe Musgrove pitched the first no-hitter in the history of his hometown team, allowing only one baserunner in a 3-0 victory over the Texas Rangers on Friday night.

The Padres were the only active MLB franchise without a no-hitter, and it came in their 8,206th regular-season game -- from a 28-year-old who grew up just down the road in El Cajon, California.

The only Rangers baserunner was Joey Gallo, who was hit by a pitch with two outs in the fourth inning. It was the first no-hitter in the majors this season and only the second complete game.

Kohei Arihara (0-1) made his first start for the Rangers after pitching the last six seasons in Japan. He allowed five hits and three runs over four innings.

LOS ANGELES -- Justin Turner homered in the sixth inning, and the Dodgers celebrated their World Series ring ceremony day with a victory over the Nationals.

Joe Ross threw five scoreless innings for the Nationals, who lost their third straight after starting the season late and short-handed due to coronavirus cases and quarantines. Former Los Angeles reliever Luis Avilán (0-1) got the loss.

The Dodgers received their World Series championship rings in a pregame event in front of the fans who weren't allowed inside Dodger Stadium in 2020 while their franchise won its seventh title. Clayton Kershaw, Betts and their teammates were cheered by a pandemic-limited sellout crowd of 15,036 while they got their jewelry at Chavez Ravine.

Corey Knebel struck out the side in the ninth for his second save, completing the shutout by four Dodgers pitchers in this meeting of the last two World Series champions.

Ohtani completed a four-run second with a three-run double to deep right-center off T.J. Zeuch (0-1). He also connected for a 422-foot solo drive to center during Los Angeles' three-run fifth.

The Angels improved to 6-2 and matched the best eight-game start in franchise history.

Marcus Semien, who had two of Toronto's five hits, scored on Chris Rodriguez's wild pitch in the eighth.

ATLANTA -- Ronald Acuña Jr. had four hits, including a long two-run homer that gave Atlanta the lead, and made a leaping catch to support Charlie Morton's six strong innings.

Acuña's fifth-inning blast off Zack Wheeler (1-1) traveled an estimated 456 feet, landing deep in the center-field seats behind the Braves bullpen for a 2-1 lead. He also had two doubles and an infield single.

Morton (1-1) permitted one run and four hits. The veteran right-hander struck out seven and walked one.

Ehire Adrianza and Freddie Freeman also went deep as Atlanta's hitters shook off a slow start to the season.

Cueto (1-0) allowed one run on Garrett Hampson's sacrifice fly in the ninth. Jake McGee finished for his third save.

Brandon Crawford snapped a scoreless tie with a two-run double in the seventh. Alex Dickerson added an RBI single in the eighth for San Francisco.

Rockies starter Austin Gomber (0-2) permitted two runs and one hit in 6 1/3 innings. He struck out five and walked four.

Austin Meadows had three of the Rays' 13 hits. Willy Adames and Joey Wendle each had two hits and two RBIs, and Brandon Lowe drove in three runs.

Aaron Hicks and DJ LeMahieu homered for the Yankees. Corey Kluber (0-1) was charged with three earned runs and five hits in 2 1/3 innings.

The Rays' home opener drew a socially-distanced crowd of 9,021 to Tropicana Field.

The Yankees played without slugger Aaron Judge, who sat out a second consecutive game with soreness in his left side. Gio Urshela was also out of the lineup after being placed on the COVID-19 injured list due to side effects from a vaccination.

Eugenio Suárez started the 10th on second base and Barnhart brought him home with a two-out single off Alex Young (0-2). Cincinnati's Amir Garrett got out of a bases-loaded jam to earn his second save, retiring Pavin Smith on a slow grounder for the final out.

Cionel Perez (1-0) got the win, retiring two batters in the ninth.

Eduardo Escobar hit a two-run homer for Arizona in its home opener. The Diamondbacks fell to 2-6 with their third consecutive loss.

The victory comes after the Astros beat the A's five times in this young season. It is just the second win overall for Oakland this year.

The game was tied at 1 when Mark Canha opened the eighth with a single off Bryan Abreu (1-1). Jed Lowrie, a former Astro who hit a solo shot in the fourth, followed with a single with one out.

Olson then sent a slider from Blake Taylor into the second deck in right field to put the A's up 4-1.

Canha added a two-run homer in the ninth. Yusmeiro Petit (2-0) got the win.

Detroit scratched starter Julio Teheran just before the first pitch. Teheran complained of tightness in his right triceps while warming up.

The Tigers avoided being shut out when Wilson Ramos homered off Bryan Shaw in the eighth.