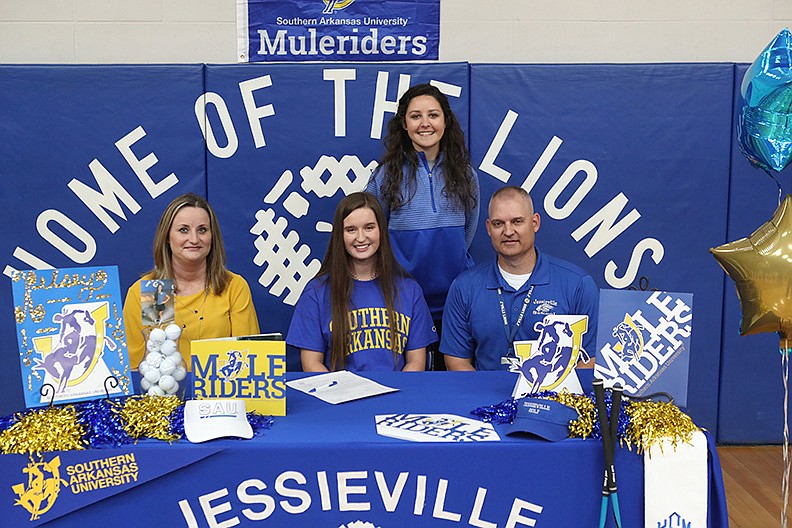 JESSIEVILLE -- Jessieville senior Kelsey Saveall inked her name to a letter of intent to play golf at Southern Arkansas University in a ceremony at Jessieville Sports Arena Friday.

During her four years on the Lions varsity golf team, Saveall helped the Lady Lions take second and third in conference in the 2017 and 2018 seasons, respectively. She made All-Conference the past three years, All-Garland County the past two and All-State this past season.

Saveall, who will be majoring in biology with an emphasis in pre-dental, expressed how grateful she is for the support she received over the years from family, friends and coaches.

"(My dad) took me to many tournaments last summer and got me private lessons in the Village," she said. "He pushes me to be the best I can be. ... With coach (Todd) Huff, he's one of my favorite people ever. He's such a good role model, and I just love him. (Huff and coach Kodi Speers) have both been really good friends to me. Honestly, I look at them as really good coaches and people I'm always going to be able to talk to...

Athletic director Jamie Saveall, who is also her father, said that he is proud of her accomplishments.

"Whenever we first started this golf adventure -- I guess adventure's the right word -- I sort of introduced it to her in ninth grade," he said. "We only had a couple girls on the team and needed a third. So as the AD and her dad, she sort of got nominated to be that third person and had never picked up a golf club in her life. After a lot of swings and misses, she fell in love with the game and ending up really deciding to make that the thing she wanted to do. Ended up in a situation where that first year in ninth grade, she made state tournament and got to experience that with her team. Her sophomore, junior and senior year, she ended up qualifying as an individual."

Jamie Saveall said that her ability to qualify for state as an individual is a testament to her work ethic.

"That was pretty much based off the hard work she put in going in the summers and playing and being a part of the junior golf program here in Hot Springs Village," he said. "It really helped her a lot, just having the accessibility to the courses in the village and the instruction they provide. It allowed her to get her foot in the door, and she's one of those kids where when she does something, she's going to give it everything that she's got and has done that. I'm just real tickled that she's gotten the opportunity to go and do this in college at SAU."

Even though golf wasn't a sport she was familiar with until high school, Kelsey Saveall said that she fell in love with it after some time on the course.

"Every golf practice, every tournament -- it was just so much fun," she said. "I had such a fun time with it. Practicing in the summer, on my own, that's when I started falling in love with the game itself. I was like 'Oh my gosh, I'm getting better at this,' and I thought I might as well just stick with it. I just ended up going from there."

Speers, who is in her first year of coaching Jessieville's golf team, said that Saveall has been a joy to coach and praised the consistent effort and intensity the future Mulerider has continued to show.

"Kelsey's a great kid," she said. "She's a lot of fun to be around. She's a kid that's respected a lot by her peers and the adults at school. Her peers voted her homecoming queen this year. She served on several committees that are collaborating with the adults on campus -- the teachers, administrators. Just a great kid and respected by everyone as far as I know. A good personality and fun to be around.

"She's put in a lot of hard work on her own. She's not missed a practice that we've had this year and she was doing lessons on her own. She was going on the days that we didn't have practice and put in time on her own. This is something that she has definitely earned and deserves. I'm really proud and happy for her."

Kelsey Saveall explained that she had other options to further her athletic career and studies such as Lyon, Hendrix, Williams Baptist and William Jewell, but she ultimately chose SAU due to tuition and it's similarity to Jessieville.

"They offered me bigger scholarships -- the other private schools, but the cost of tuition was so much compared to SAU," she said. "It's just a cheaper school, in general. It's like Jessieville -- a bigger version of it. I think I'm gonna fit in great there. I toured and I loved it. ... They're one of the better teams that I talked to. I think most of the girls are from Texas. I haven't really met them yet. There's about five or six of them, and they're all pretty good. I'm excited."