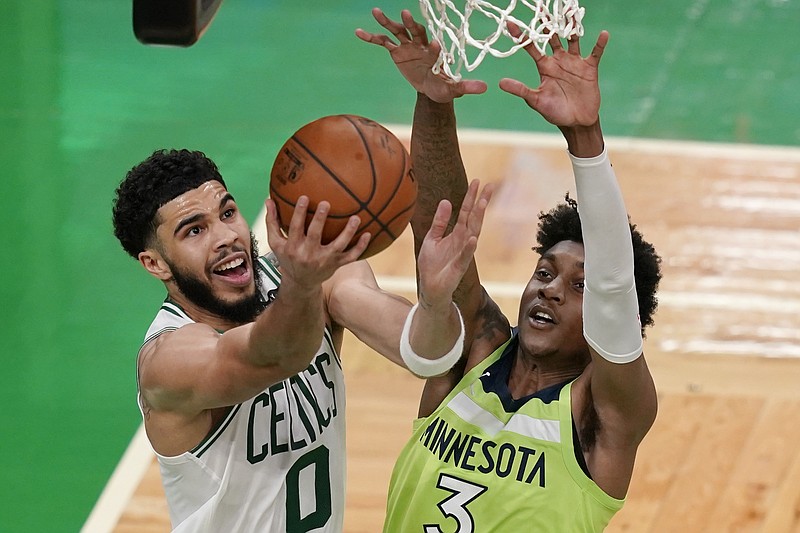 Boston Celtics forward Jayson Tatum (0) goes to the basket against Minnesota Timberwolves forward Jaden McDaniels (3) during the second quarter of Friday's game in Boston. - Photo by Elise Amendola of The Associated Press

BOSTON -- Jayson Tatum scored a career-high 53 points -- including 18 in the fourth quarter and overtime -- and the Boston Celtics held on to beat the Minnesota Timberwolves 145-136 on Friday night.

It was the first 50-point game for the All-Star, who eclipsed his previous high of 41. Jaylen Brown had 26 points, and Marcus Smart added 24 points, eight assists and six rebounds to help Boston post its fourth win in five games.

Boston erased what was a 17-point deficit in the third quarter and led by as many as eight in the fourth before Minnesota rallied to send it to OT.

The Celtics surged again at the start of the extra period and took a 135-129 lead on a 3-pointer by Walker. Minnesota got within 135-132 via a three-point play by D'Angelo Russell. But Boston outscored the Timberwolves 10-4 the rest of the way.

LaVine scored 39 of his career-high 50 points in the first half, and Nikola Vucevic had 25 points and 10 rebounds, but the Bulls' three-game winning streak was snapped. Chicago was trying to win four straight for the first time since December 2017.

LaVine, who set the NBA high for points in the first half this season, scored 25 straight in the second quarter, but the Hawks didn't go easily, taking an 86-84 lead entering the fourth. LaVine's previous season high was 46 on Feb. 10 against New Orleans.

Alec Burks had nine of his 19 in overtime and Julius Randle recovered from a scoreless first half to finish with 15 points, 11 assists and 10 rebounds in his fifth triple-double of the season. New York snapped the Grizzlies' four-game winning streak.

The Knicks had a 3-1 lead, then never led again in regulation. They were down double digits for much of the night and still trailed by 13 points midway through the fourth quarter. But they put it together just in time to avoid a third straight loss and win for just the second time in seven games.

Immanuel Quickley scored 20 points, and Derrick Rose had 19 for the Knicks.

Ja Morant scored 26 points, and Dillon Brooks had 23 for the Grizzlies, who were trying to complete a perfect four-game trip through the Eastern Conference and appeared for about 45 minutes they would.

NEW ORLEANS -- Zion Williamson scored 14 of his 37 points in the fourth quarter and New Orleans held on to beat Philadelphia.

Williamson scored the first six points of the fourth quarter and eight of the Pelicans' first 10, extending an eight-point lead to 86-71. He scored three more times after the 76ers pulled to 94-87 with 4:03 left.

Williamson was 15 of 28 from the field and added 15 rebounds and eight assists. Brandon Ingram added 17 points, but shot 5 of 21 in his first game back after missing five with a right foot injury.

Philadelphia, which missed an opportunity to tie Brooklyn for the best record in the Eastern Conference, tied a season low with 94 points. Tobias Harris led the 76ers with 23 points, and Joel Embiid, had 14 on 5-of-16 shooting.

The Clippers trailed by 10 at the end of the first quarter and found themselves down 40-26 with 9:57 remaining in the second before outscoring the Rockets 41-6 the remainder of the period.

The Clippers announced before the game that guard Patrick Beverley broke his left hand in Thursday's win over Phoenix and will be out for at least four weeks after undergoing surgery. LA was also without Paul George and Rajon Rondo.

Terry Rozier and Devonte' Graham each scored 20 points. Jalen McDaniels had 19 and PJ Washington added 18 for the Hornets.

Milwaukee lost its third straight as it rested its top players one night after closing a six-game trip with a 116-101 loss at Dallas. Jordan Nwora scored a career-high 24 points.

DENVER -- Nikola Jokic had 26 points, 14 assists and 13 rebounds and Denver Nuggets held off San Antonio when DeMar DeRozan's tip spun out at the buzzer.

Derrick White had 25 points, and DeRozan added 24 points and 12 assists.

Russell Westbrook had 19 points, 14 assists and 14 rebounds for his league-leading 21st triple-double. Rui Hachimura added 22 points and five rebounds for the Wizards.

Stephen Curry had 32 points, five assists and six rebounds for the Warriors.

Holiday made six of Indiana's 11 3-pointers, two nights after scoring a season-best 22 points in a victory over Minnesota. Sabonis returned from a sprained left ankle.

Doug McDermott made 8 of 13 shots and added 19 points off the bench for Indiana. The Pacers improved to 15-12 on the road and 20-6 when leading after three quarters.

Terrence Ross had 24 points for Orlando. 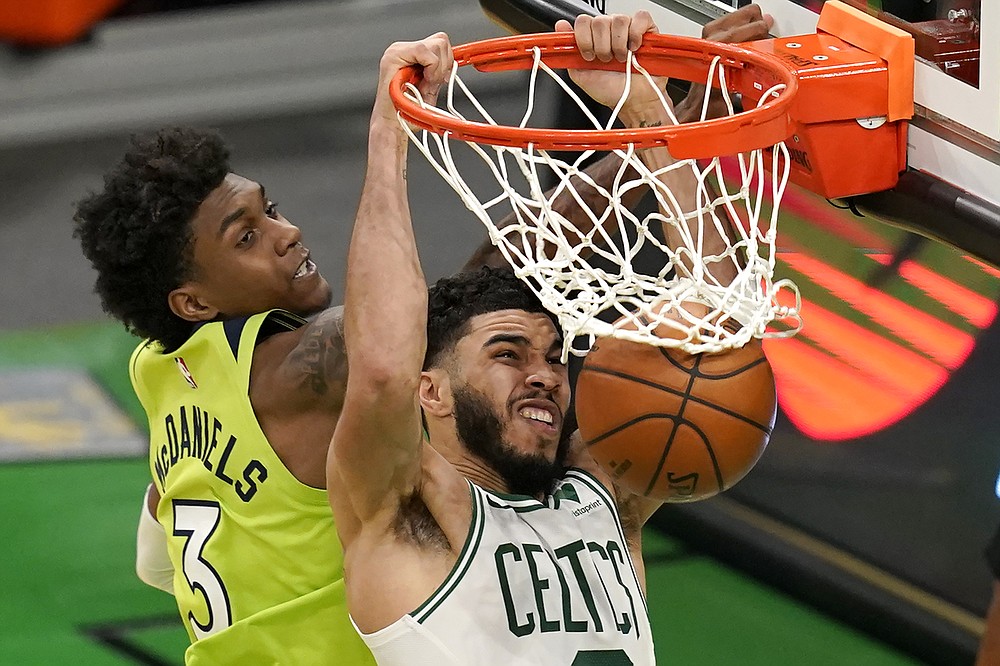