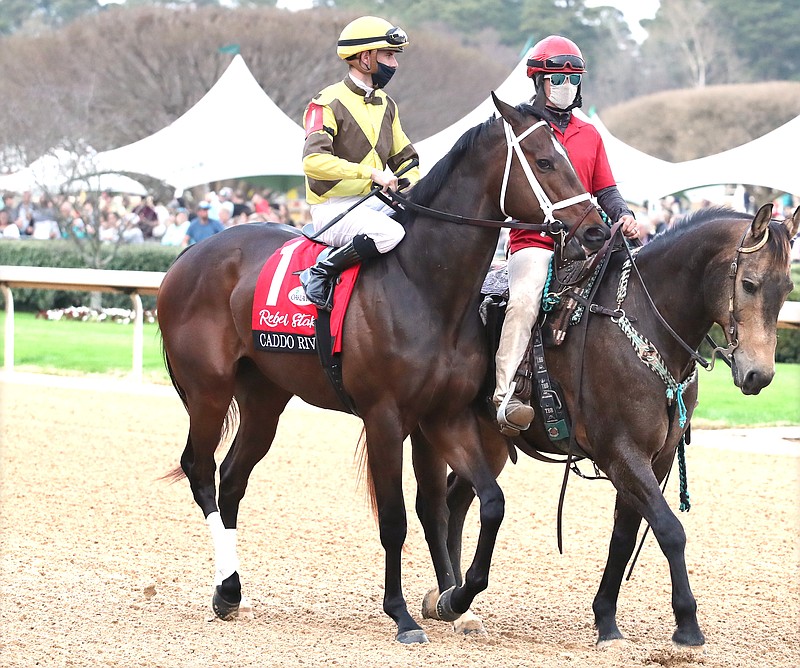 Jockey Florent Geroux and Caddo River take part the post parade prior to the Rebel Stakes in March. The horse, owned by Arkansas lumberman John Ed Anthony’s Shortleaf Stable, is looking to rebound in the Arkansas Derby off a disapointing fifth place finish in the Rebel Stakes. - Photo by Richard Rasmussen of The Sentinel-Record

Caddo River's niche in trainer Brad Cox's plans for Kentucky Derby 147 hasn't changed in some time. The Hard Spun colt needs points in today's Arkansas Derby, 100 for winning or 50 for placing second, to run May 1 at Churchill Downs.

It has been that way since Jan. 22, opening day at Oaklawn, when the Hard Spun colt wired the field by 10 3/4 lengths in the Smarty Jones Stakes going a mile in his 3-year-old debut. For his first stakes race. he earned 10 Derby qualifying points, giving hopes of a points infusion in later Derby preps

With 50 points offered the March 13 winner at Oaklawn, Caddo River collected none when fifth in the Rebel Stakes going 1 1/16 miles. That makes the nine-furlong Arkansas Derby, which owner-breeder John Ed Anthony (Shortleaf Stable) has won three times, a defining race for the horse named after the body of water that flows through southwest Arkansas.

It will require more stamina than was shown when Caddo River folded in midstretch of the Rebel after yielding the lead into the first turn. In that race, Caddo River dropped back from the rail post while eventual winner Concert Tour overcame outside post seven.

About what could be the crucial first trip past the grandstand, Cox is cautiously optimistic, nothing more.

"We're just hoping that he can get little more of a forward run and maybe the jock drops his hand and kind of lets him do his thing and get in a big rhythm and see if that works a little better than last time," Cox said. "If it doesn't, we're in trouble -- bottom line."

Otherwise, Concert Tour may take his five Derby rivals for another spin around the block. The only surprise would be if one of the others made a late run, possibly winning if the even-money favorite was off his game.

"I think the break is important, how you leave there," said Concert Tour trainer Bob Baffert. "You never know what's going to happen. You don't know what the strategy's going to be. I just worry about my own horses.

"If he (Caddo River) goes, he (Rosario) will just ride his own horse and see what he does. My other horse has speed, too. Going a mile and an eighth, it's a different story."

As in the Rebel, Baffert would hope for an exacta finish involving Hozier, who has 20 qualifying points from the last race. Trainer Steve Asmussen, whose 0-for-21 Derby record blights a Hall of Fame career of more than 9,000 victories, would be encouraging Super Stock while California-based trainer Peter Miller would keep fingers crossed for Get Her Number, a Grade 1 winner at 2 who was soundly beaten in the Rebel. As for Dallas Stewart, whose Last Samurai completes the field, the colt's owner, Arkansan Willis Horton, has Derby Week plans in Louisville involving Oaklawn stakes-winning filly Will's Secret in the Kentucky Oaks.

Even if Caddo River doesn't get in, Cox holds a strong Derby hand with undefeated juvenile champion Essential Quality and stakes-winning Mandaloun for other barns.

Baffert, meanwhile, would seek a record seventh Kentucky Derby victory with a horse or two trending upward on his stable's depth chart. After an injury knocked unbeaten Life Is Good off the Derby trail, Concert Tour took up the slack, the Rebel triumph coming in his first race outside California and around two turns. He already has stakes winner Medina Spirit in the field and, who knows, Hozier might punch his ticket today at Oaklawn.

Only the names change for Baffert, who won the Arkansas Derby with Bodemeister in 2012 and Rebel winners American Pharoah in 2015 and Nadal last year (Charlatan, first-division winner in 2020, was disqualified for a drug violation, which Baffert is appealing). Nothing seems beyond the scope of a man with two Triple Crown winners (American Pharoah in 2012, Justify in 2018) in the last six years.

"I just feel fortunate that I have these two after losing Life Is Good," Baffert said. "It's pretty tough, you know, but that's why everything works itself out for the Derby. The horse will get you there."