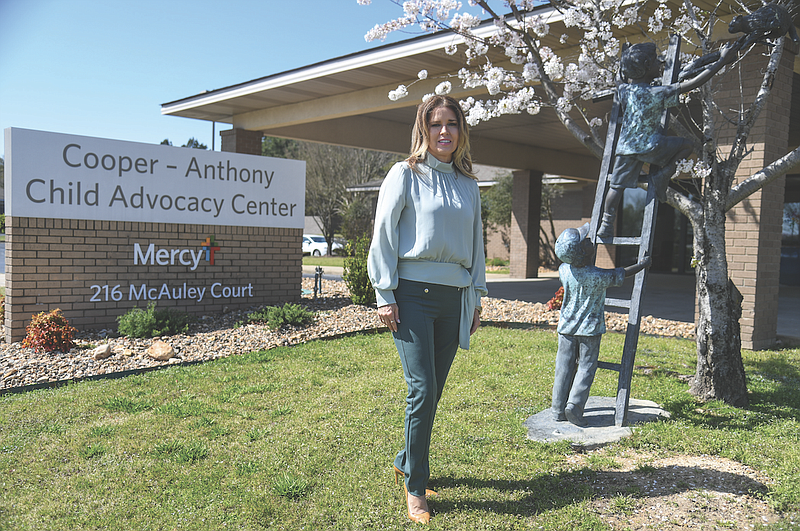 April is Child Abuse Awareness Month. Last year alone, more than 750 children walked through the door of the Cooper Anthony Child Advocacy Center with allegations they had been abused.

When the Cooper Anthony Child Advocacy Center first opened its doors in 2003, Garland County was ranked high on the list of counties in the state with high rates of child abuse. Over the years, an interdisciplinary team made up of advocates, investigators and health care workers have contributed to the decline in those rates while simultaneously protecting and advocating for each child who walks into the center.

The team included Tracy Childress, a woman who began her career at the CAC as an interviewer in 2005 and now serves as the center's director. She made the transition from being the clinical supervisor for the Cooper Anthony Child Advocacy Center to the director in late 2019. Although she only intended to step into the position as an interim director, she soon found she was the missing cog to a smooth-running operation.

"I was thinking that would just be short-lived and then it was really the staff and the team that really asked me if I would stay and be the director. ... Because of the support of the team, and (the fact) I had already been working as the director and training the other forensic interviewers, I felt like it was time for me to be able to allow these other interviewers to grow and be in that role," Childress said.

However, Childress never predicted how unpredictable her first year as the director would be.

"It was a crazy time, and I felt a little bit more blessed because our center is part of a hospital organization," she said. I have been a long-term Mercy employee, and I had the benefit of working in the emergency room for 13 years. ... It was challenging at times because we all know things would change each and every day.

"We were made essential, along with some other agencies, just because the nature of what we do is so vital and so important for the children and families that we do serve. And so it was passed into law that CACs were essential, so we never close our doors. We have always been open. It was hard but we have an extremely solid team."

As the director, Childress is responsible for supporting and leading her team day to day. This includes ensuring they all have the necessary resources to work as an interdisciplinary team.

"At times, I almost feel guilty saying leading the team because this team is comprised of such amazing individuals. We are small in number but we are so supportive of each other, that my day-to-day operations (consist of) so much communication. There is such great collaboration. It's not just me making the decisions I have such an amazing team. It's like we're all taking care of this ministry," she said.

However, Childress does not just coordinate with the other people working inside the center. She also coordinates with families, the Department of Human Services, law enforcement, and anyone else involved in a child maltreatment case. It is her job to ensure communication runs smoothly and the center's job to put the child first.

Child advocacy centers were created to serve as a hub for victims of child abuse rather than forcing the victim to visit several different locations for the different interviews and exams necessary. This reduces the stress on the child by allowing them to feel comfortable in one setting and reduces the number of interviews they must participate in where they detail alleged abuse.

"What they're having to deal with and go through can be traumatizing in and of itself. The whole premise behind why child advocacy centers were developed, is so the children would be put first. Not the case, not the agency, not anyone or anything else but the child," Childress said.

Cooper Anthony Child Advocacy Center provides services to families in six counties. While much of their efforts are spent investigating cases of abuse that already occurred, the staff works on prevention efforts in schools and keeps up with families they help along the way to provide continuous support.

"We have three full-time child advocates, and they are very well in tune with always seeking out resources and what can we do better for these families. We keep through the year a list of the children that come through our doors, our whole team keeps a list, and each of us writes down the name of a child who may benefit from Christmas (gifts)," she said.

In 2016, the CAC began its first child abuse prevention presentation to kindergartners at Park Elementary. A representative would enter a classroom for about 25 minutes and give a presentation based on a research-based, national program about body safety.

"We received such positive feedback from the counselors and the teachers. It was so readily received and then we started rolling it out to all of our other schools, and we have only been asked to increase the grade levels and to continue to provide this to more children because it's so needed," she said.

"One of the things we rolled out last year is our Champ Camp," She added. "Champ Camp stands for Children Healing from Abuse with Maximum Potential. So Champ Camp is a one-week camp for children who graduated or been recommended from the therapist that they could benefit from being in a group setting with someone of their peer who have had a similar experience.

"We rolled out our first champ camp last summer, and it was wonderful. We did an all-girls camp -- it just worked out that way, because of the referrals. Then, we had a camp of both male and female younger children, and we just did a spring break, drive-by camp to children that were referred from one of our therapists. Because of COVID, we had to adapt. We have to become flexible, and so we did a drive-by Champ Camp that just took place."

The advocates working with the CAC often go above and beyond the call of duty, long after the child's case is closed. They remain extremely integrated with families, helping them find resources to improve their situations.

"It's not a job. It has to be something that you truly know that this is where you were called to be," she said. "