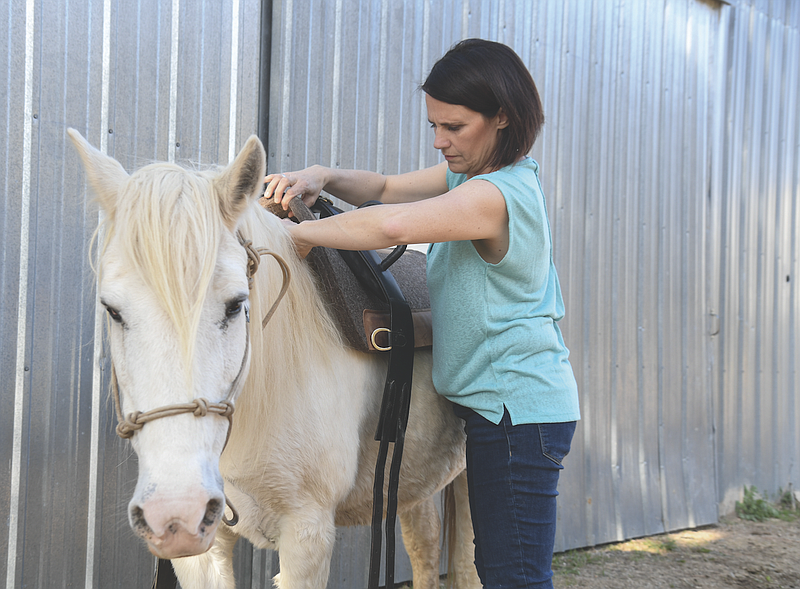 For Swiss native Katja Summerlin, being around horses comes second nature. Growing up just down the road from a therapeutic riding center that served children with extra challenges in life, it was only natural she would turn to therapeutic riding when she learned her son, Aiden, was diagnosed with Down syndrome.

"All my life, I've always dreamed of having horses and be around them," Summerlin said. "So this dream was starting to come true by buying this property. I didn't know at the time that I was pregnant with a child with Down syndrome, and it started to come together when my son was born. He needed a lot of help; he had four surgeries, including an open heart surgery where we needed Children's Hospital. It was pretty clear that he will need a lot of therapies along the way.

"When the fog lifted and we came out of survival mode, which probably took us about two years to get our bearings with him, I realized that Hot Springs and Garland County doesn't have a therapeutic riding center. I feel that horses and children, especially children with disabilities, just go together."

Growing up, she would often find herself up the road at a therapeutic riding center in Switzerland. There, she would learn how to care for and ride horses. She was also exposed to the benefits of including horses in therapy routines for children.

"I didn't know at the time, but therapeutic riding in the '80s was still a novelty. It originated, actually, from Europe. Switzerland, in particular. The mentor at the time there became my mentor later with riding. He was one of the pioneers of starting therapeutic writing in Switzerland," she said.

Although she says it never occurred to her that she might one day pick up the reins of her own therapeutic riding center, Summerlin has found her perfect fit.

"Here we are 30 years later. It kind of came apparent to me, I have all the tools and the experience to start something like this. It really kept nudging me for a while because I know how much work it is and what a gigantic responsibility it is to have kids on horseback, especially precious children who have special needs. Understanding all of that as a mom, and as a horse person. I kind of fought it for a while because I don't know if I have it in me to take that on. It just started to scream louder, 'You have to do it. If not, nobody else will,'" she said.

Summerlin and her husband would go on to start a nonprofit organization for the Sunshine Therapeutic Riding Center. The organization consists of a board of directors that is 12 strong and takes into account the Summerlins' knowledge and experience with every decision. The center was officially established in August of 2019.

"We had fundraising plans and it was all planned out for last year but, as you know COVID put a wrench in things. We couldn't have any events so we had time to kind of go back to the drawing board and really look into details, especially the legal setup of the organization to really get it right and be diligent about the details. A year later, now we have an arena, we have some equipment, five horses, and one little pony that has a special story," she said.

The pony she speaks of is a stout Welsh pony with a beautiful white coat and mane. They call this pony Scrim in honor of the late Hot Springs police Cpl. Brent Scrimshire. Summerlin's husband was one of the first to respond to the scene the day Scrimshire was fatally shot. They asked his family permission to name the pony in his honor during what was a difficult time for all local law enforcement families.

"They were very happy to say yes. ... She is very chubby and giggly when she runs. She came to us from a rescue in Missouri, and we didn't know much about her, except for that she was a show pony and had kids in her back, and that she was adorable. She arrived on the day of Officer Scrimshire's funeral. Scrim has an important name, she just doesn't know it," she said.

Most of the horses at the Sunshine Therapeutic Riding Center are rescues from different areas. However, Summerlin says he has to be very selective about which horses she adopts. Not every horse will do well in a therapy setting.

According to Summerlin, about 98% of the horses she gets offered cannot ever become therapy horses due to a variety of reasons. During a hippotherapy session, better known as Equine Assisted Therapy, a horse is asked to remain calm and collected while the rider engages in a therapy session that can last up to half an hour on horseback.

Sometimes, this session can be the act of riding itself. Summerlin notes that a horse's movement helps the sensory input in the brain and mimic walking. For someone who has never been able to walk, this is an amazing therapy. Other times, a patient will engage in activities like throwing a ball.

"Lots of things are possible in a session. A lot of kids that are nonverbal speak their first word on horseback. For a parent that is looking for improvement, every day can be an absolute miracle when that happens, and it does happen. There are oftentimes tears. People are very moved by what the horse can do for them," she said.

The Equine Assisted Therapies are conducted by Kidsource, a statewide program with 12 years of experience with this type of therapy in Benton. Eventually, Summerlin plans to offer general therapeutic riding, as well. She hopes to begin her own training this year.

"Therapeutic Riding is also called Adaptive Riding because you're basically teaching somebody with a disability to ride a horse. It's recreational in the first place, but with therapeutic benefits. In hippotherapy, or Equine Assisted Therapy, you are using the movement of the horse as a tool to conduct therapy," she explains.

Hippotherapy can start as young as 2 years old, depending on the disability and qualification of the individual. The Adaptive Riding will start at 4 years old and extend up to 21 years old.

Since the horses work with children who have disabilities, safety is the main focus. That begins with having quality therapy horses.

"Really the most important part about a potential therapy horse is their demeanor and their character," Summerlin said. "They must love people. If you have horses that are not used to human touch a whole lot, it won't work. Each horse is different, and you need to find the horses that love kids. So it's kind of like a job search almost. You're interviewing these horses to see how their demeanor is and how they respond to things.

"We've spent a lot of time just groundwork. Just working on the ground, having kids, crawl all over them; especially my daughter, Sophia. She is fearless and will do anything. They've been exposed to kids and dogs and flags and plastic bags and balls being thrown at them. The most important part about a therapy horse is the relationship. The horse will have to trust you as a leader."

During a therapy session, the child is never strapped to the horse, and two "side-walkers" stay on either side of the child at all times. All while the horse is led by a third individual and a therapist leads the session.

"Depending on what they're trying to do in therapy, they use balls, they sit the child backward and draw numbers or letters on the butt of the horse. They can also do reading exercises where we have a clipboard or a magnetic board where they can put flashcards or letters or numbers for children to read. Pool noodles are a fun tool as well, or balancing something. Just physical exercises like touching your toes, touching your head, kind of body awareness exercises. It depends on what that therapy goal is for that session, but there's a range of tools and games that can be played," she said.

As for the benefits, Summerlin says she notices them almost instantly.

"A lot of people say their children are calmer and more focused because they actually have a task that makes sense. It's not just an exercise but it has a purpose behind it. We are riding somewhere, we are going from A to B, with, with a horse. We have to unbuckle or buckle something, and it has a purpose behind it. Just all these components together can have a huge boost of confidence. It helps with focus and just alone being outside. It's just that a great stimulation for the whole body and mind," she said.

To keep the riding center operational, Summerlin relies on donations and volunteers. Even on days when there are no therapy sessions scheduled, Summerlin said she still has to feed the horses. Not including the volunteers needed for each therapy session.

To learn more about volunteering with the center, visit https://sunshineridingcenter.org/.