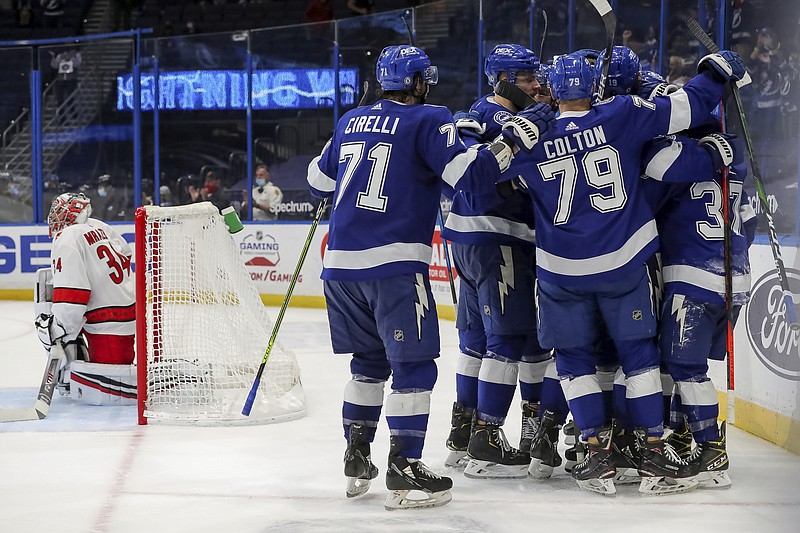 Members of the Tampa Bay Lightning celebrate their winning goal as Carolina Hurricanes goaltender Petr Mrazek, of the Czech Republic, reacts during the overtime period of Monday's game in Tampa, Fla. - Photo by Mike Carlson of The Associated Press

TAMPA, Fla. -- Yanni Gourde scored 2:50 into overtime to give the Tampa Bay Lightning a 3-2 victory over the Carolina Hurricanes on Monday night in a matchup between Central Division contenders.

Andrei Svechnikov and Brady Skjei scored for Carolina, which has only one regulation loss in the past eight games. Petr Mrazek stopped 33 shots.

Carolina and Florida are tied for the Central Division lead with 63 points, though the Hurricanes have two games in hand. The defending Stanley Cup champion Lightning are one point behind the co-leaders.

Robin Lehner stopped 29 shots and the Golden Knights won their seventh in a row, overcoming a two-goal deficit behind a pair of power-play goals from captain Mark Stone.

The 41-year-old Marleau played in his 1,768th career game to break Howe's record in front of a sold-out crowd of 3,950 that included his wife, Christina, and four sons. That wouldn't have been possible in San Jose, where fans still aren't allowed in the arena during the pandemic.

Martin Jones made 38 saves for the Sharks, including five spectacular game-saving stops in overtime.

Lehner, who denied all three San Jose attempts in the shootout, improved to 8-0-1 since returning from a concussion on March 19.

NASHVILLE, Tenn. -- Luke Kunin and Calle Jarnkrok each scored a goal and added an assist to lead Nashville over Chicago.

Alex DeBrincat and David Kampf scored for Chicago, which has lost two of three.

Nashville has won all six meetings between the teams so far this season as they battle for fourth place in the Central Division. Dallas, which defeated Detroit in a shootout Monday, also is involved in a tight three-way race for the division's final playoff spot.

DALLAS -- Denis Gurianov scored in the fifth round of a shootout to give Dallas a win over Detroit, and a vital extra point for the defending Western Conference champions in their push to get back in the playoffs.

Roope Hintz and rookie Jason Robertson both scored in regulation for the Stars, with Miro Heiskanen assisting on both goals. Robertson also converted the first shootout attempt for Dallas.

Anton Khudobin stopped 20 shots before the shootout, including a glove save reaching around a defender with less than three minutes left in regulation.

After Red Wings captain Dylan Larkin got a puck through Khudobin's legs in the first round of the tiebreaker, the Stars goalie stopped the next four attempts, including Filip Hronek's try after Gurianov had beaten Thomas Greiss at the other end.

Greiss finished with 34 saves, and both goalies had three in overtime.

Luke Glendening, with only three goals in his first 44 games and none since March 11, scored two tying goals for Detroit in the second period.

The Stars have earned points in a season-best seven games in a row (5-0-2). They moved into fifth place in the Central Division with 48 points, one ahead of Chicago, with 12 regular-season games left. Nashville is fourth with 51 points, but only nine games remaining.

Jesse Puljujarvi, with a goal and an assist, Ethan Bear and Devin Shore also scored for Edmonton, while Mike Smith made 22 saves. McDavid also had two assists for a three-point game for the Oilers, who trailed 1-0 with less than 10 minutes to play in regulation.

Eric Staal scored for Montreal, which got 25 saves from Jake Allen after he replaced Carey Price to start the second period. Price, who stopped seven shots in the opening 20 minutes, didn't come out after the intermission.

The Oilers stretched their home winning streak to eight games, and improved to 2-3-1 against Montreal in 2021.

The Canadiens, meanwhile, fell to 2-6-0 over their past eight games without injured winger Brendan Gallagher (broken thumb).

CALGARY, Alberta -- Connor Brown scored a short-handed goal and added an empty-netter for Ottawa in a win over Calgary.

Josh Norris had a goal and an assist and Brady Tkachuk also scored for Ottawa. Senators goaltender Matt Murray made 26 saves for the win.

Elias Lindholm and Michael Stone scored for the Flames. Jacob Markstrom stopped 16 of 19 shots in the loss.

The Montreal Canadiens hold down the fourth and final playoff berth in the North Division. Montreal lost 4-1 to the Edmonton Oilers on Monday, but remained six points ahead of Calgary.

The Flames have 11 games remaining in the regular season, but three games in four days against the visiting Habs starting Friday will likely determine if Calgary sees the postseason.

GLENDALE, Ariz. -- Kevin Fiala had a goal and an assist, Cam Talbot stopped 22 shots and Minnesota stretched its winning streak to four games.

Kirill Kaprizov, Jordan Greenway and Marcus Johansson also scored to help the Wild strengthen their playoff position. Minnesota has 59 points, 14 ahead of fourth-place Arizona in the West Division.

Christian Fischer scored his first goal in 48 regular-season games and Alex Goligoski also scored for the Coyotes, who had numerous defensive breakdowns in losing for the sixth time in seven games. Darcy Kuemper stopped 19 shots.

Sam Bennett and Radko Gudas also scored for the Panthers, who have won five straight games against the Blue Jackets and gone 6-0-1 in their past seven meetings.

Vatrano's second goal was an empty-netter at 18:38 of the third after he was stopped on a penalty shot earlier in the period.

Oliver Bjorkstrand got his team-leading 15th goal and Zac Dalpe also scored for Columbus, which has lost three straight. 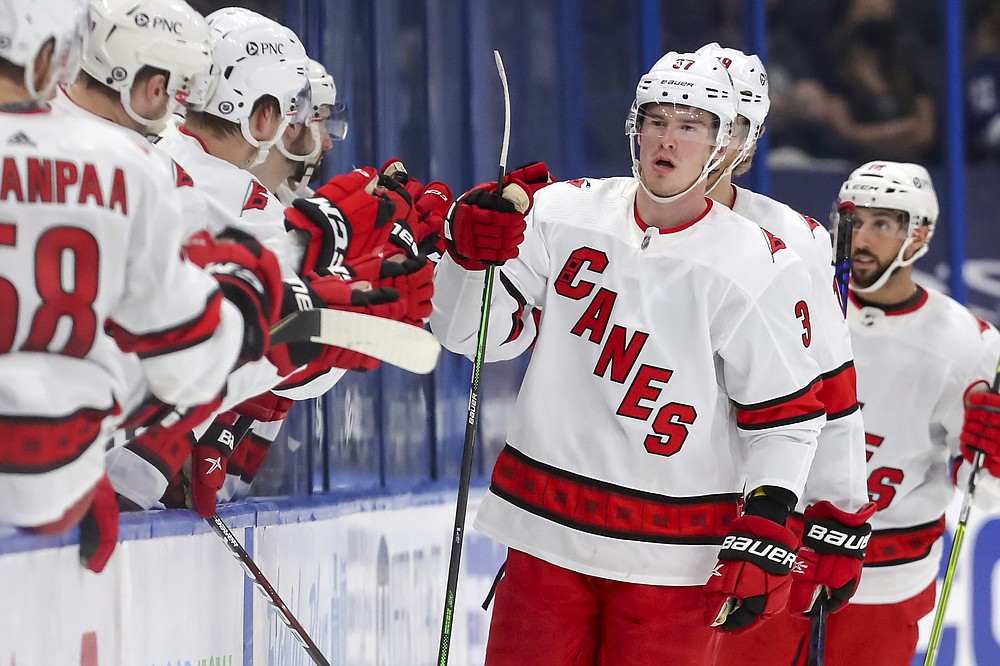