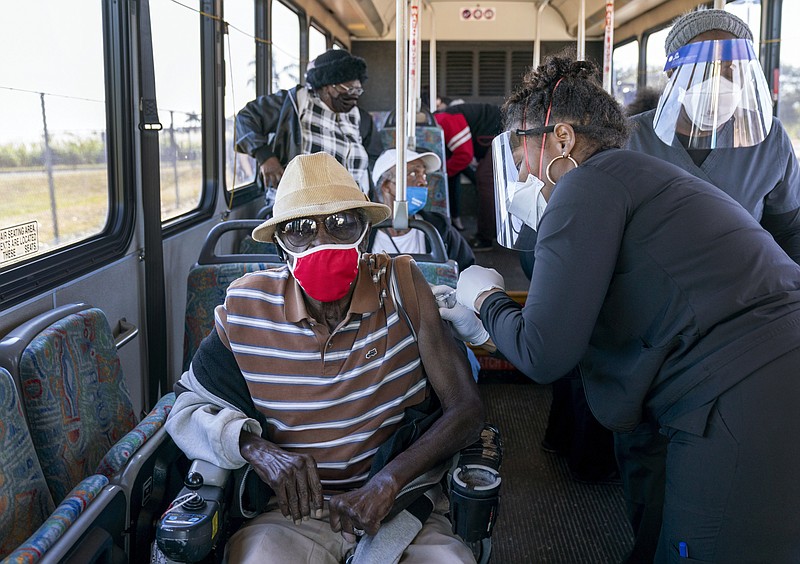 Greg Lovett/The Palm Beach Post via AP A senior receives a COVID-19 vaccine from a health care worker after arriving on a bus to a vaccination site at Anquan Boldin Stadium in Pahokee, Fla., on Feb. 3.

WASHINGTON -- COVID-19 hospitalizations among older Americans have plunged more than 70% since the start of the year, and deaths among them appear to have tumbled as well, dramatic evidence the vaccination campaign is working.

Now the trick is to get more of the nation's younger people to roll up their sleeves.

The drop-off in severe cases among Americans 65 and older is especially encouraging because senior citizens have accounted for about 8 out of 10 deaths from the virus since it hit the U.S., where the toll stands at about 570,000

COVID-19 deaths among people of all ages in the U.S. have plummeted to about 700 per day on average, compared with a peak of over 3,400 in mid-January.

"What you're seeing there is exactly what we hoped and wanted to see: As really high rates of vaccinations happen, hospitalizations and death rates come down," said Jodie Guest, a public health researcher at Emory University.

The best available data suggests COVID-19 deaths among Americans 65 and older have declined more than 50% since their peak in January. The picture is not entirely clear because the most recent data on deaths by age from the Centers for Disease Control and Prevention is incomplete and subject to revision.

Still, the figures suggest that the fall in deaths among senior citizens is driving the overall decline in lives lost to COVID-19, vindicating the U.S. strategy of putting elderly people at or near the front of the line for shots when the vaccine became available over the winter.

The U.S. trends mirror what is happening in other countries with high vaccination rates, such as Israel and Britain, and stand in stark contrast to the worsening disaster in places like India and Brazil, which lag far behind in dispensing shots.

According to U.S. government statistics, hospitalizations are down more than 50%, but most dramatically among senior citizens, who have been eligible for shots the longest and have enthusiastically received them.

Two-thirds of American senior citizens are fully vaccinated, versus just one-third of all U.S. adults. Over 80% of senior citizens have gotten at least one shot, compared with just over 50% of all adults.

At the same time, however, overall demand for vaccinations in the U.S. seems to be slipping, even as shots have been thrown open to all adults across the country. The average number of doses administered per day appeared to fall in mid-April from 3.2 million to 2.9 million, according to CDC figures.

Also, new virus cases in the U.S. have been stuck at worrisome levels since March, averaging more than 60,000 per day, matching numbers seen during last summer's surge. The new cases are increasingly among people in their 30s, 40s and 50s, who also make up a larger portion of hospitalizations.

In Michigan, which has been battered by a recent surge of infections, hospitalizations among people in their 50s have increased 700% since late February, outpacing all other age groups.

"Thankfully they have done quite well," said Dr. Mark Sullivan, a critical care doctor at Swedish Medical Center in Seattle. "They tend to recover a little quicker because of their youth."

With enough people vaccinated, COVID-19 cases should eventually begin to fall as the virus finds fewer and fewer people to infect. Guest and other experts say Israel appeared to reach that threshold last month after it fully vaccinated roughly 40% of its population of 9 million people.

But the U.S. faces challenges in conducting mass vaccinations because of its far greater size, diversity, geography and health disparities.

On Tuesday, President Joe Biden announced new federal funding for small businesses so that employees can take time off with pay to get vaccinated or recover from the shot's side effects.

The challenge will be quickly vaccinating younger Americans, who feel they are less vulnerable to the coronavirus but are mainly the ones spreading the disease.

"To really feel that we're out of the woods we've got to see a lot less cases than we're seeing now," said Dr. Jesse Goodman, a vaccine specialist at Georgetown University. "It's going to take a wider, continuing effort."

In Chicago's Cook County, where 91% of adults 65 and older have had at least one shot, the patients in the hospital these days are younger and do better.

"That feeling of dread is definitely eased with older patients getting vaccinated," said Dr. Tipu Puri, a kidney specialist and associate chief medical officer for clinical operations at University of Chicago Medical Center.

At some moments, there's even joy, he said. He recently stopped to help an elderly couple find the hospital's vaccination clinic. The woman was pushing her husband's wheelchair.

"Those are people you hope you won't see in the hospital," Puri said. "We're not going to see them in the emergency room or in the ICU."

He added: "This is what coming out of the pandemic feels like."

AP Health Writer Tom Murphy contributed to this story from Indianapolis. Johnson reported from Seattle. The Associated Press Health and Science Department receives support from the Howard Hughes Medical Institute's Department of Science Education. The AP is solely responsible for all content. 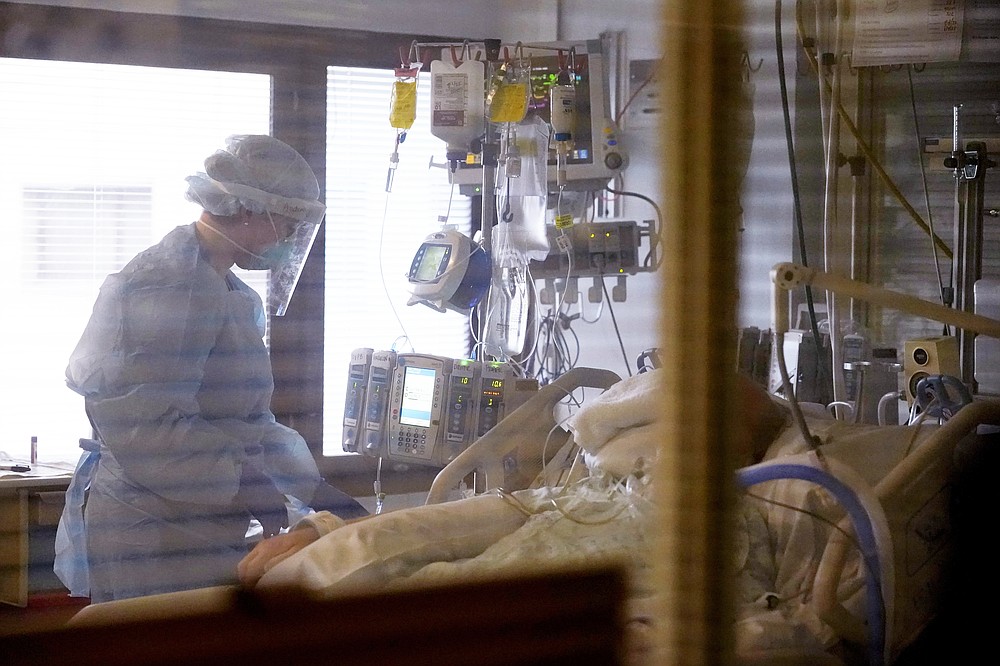 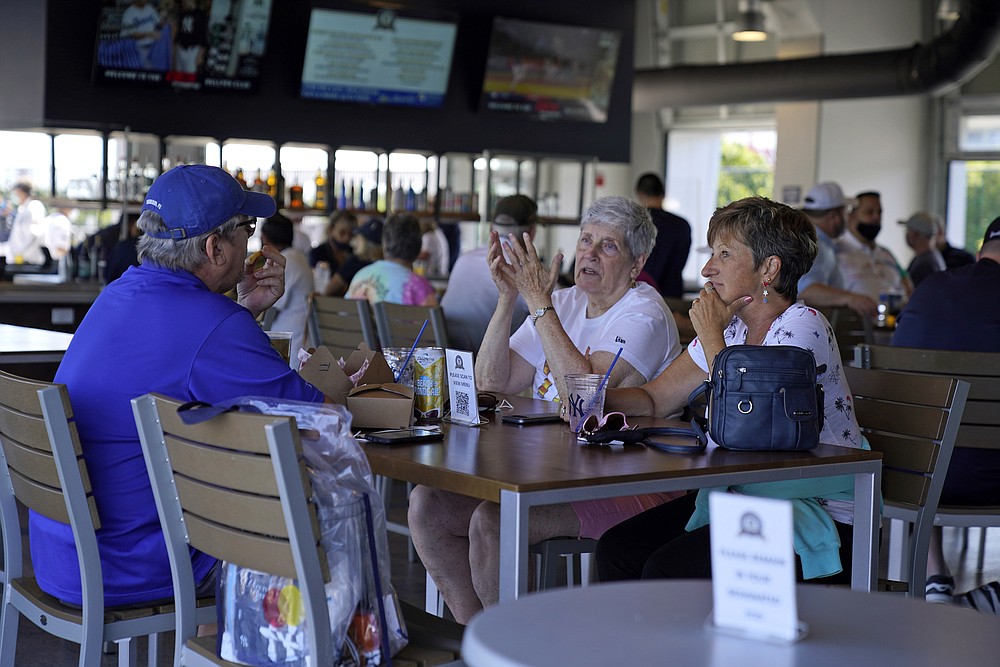 The Associated Press Baseball fans gather in the Bullpen Club at George M. Steinbrenner Field before a spring training exhibition baseball game between the New York Yankees and the Toronto Blue Jays in Tampa, Fla., on March 24.