Patience: In a major home project, the joy is in the work 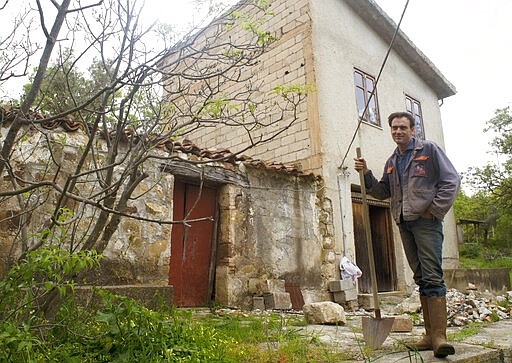 CASTELBUONO, Sicily -- When my wife and I bought a hectare (about 2.5 acres) of countryside with three buildings on it in the mountains of Sicily four years ago, I didn't expect -- or want -- the work to be done quickly. Little did I know it would become what feels like a lifetime of work.

After much dreaming and doubting, drafting floor plans and scrapping wild ideas, looking at the structures from every angle, studying their fissures and (lack of) craftsmanship, I finally felt ready earlier this year to begin work on the main construction project: turning a two-story barn made out of imposing, and boring, cement blocks into a funky kitchen and cozy bedrooms.

"Chalk! Can you buy me some chalk in town?" I asked my wife before she headed out the door with our two sons, off to school a couple months ago.

We have been living in one of the three buildings on the property: It's a tiny farmer's house that was, importantly for jobless transplants like us from city life in America, inhabitable when we made our move and started a new life in the Sicilian mountains. There was a flushing toilet, tiled floors, windows that didn't leak too badly and two doors (plus a couple pieces of furniture). But it's temporary.

"I want chalk to draw lines with," I explained. "You know, where the electrical lines, kitchen counters, sink, refrigerator will go."

They left for town, clanking the metal front door shut behind them.

Where to start with an old dilapidated barn in Sicily? I'd discussed so many possibilities with so many different builders and architects. I'd had eureka moments and many more of complete nothingness.

I am doing the work on my own. At moments, I think about hiring help and bringing in some of Italy's ubiquitous "muratori," a word meaning "wall builders" and used to describe anyone in the building trade. But I'm resisting the temptation. It's not just about saving money: I want this to be our own special project and, deep down, I don't want it finished in a flash.

A few days later, chalk in hand and standing where the place's old farmer once kept cows, I was overcome by the realization of how long it had taken me to get to this point. Finally, years after we moved here, it was time to start turning the former barn (complete with a feed trough and a gutter down the middle of the floor where the slop once was washed away) into the kitchen and living room I envisioned.

What had taken me so long? I sighed. "It takes time. A lot of time," I muttered. "Who knew? I certainly didn't."

I find myself needlessly justifying the slow pace to myself (and others).

In doing work on a home, you can feel judged. Are you lazy? Or just incompetent? Can't you afford to buy the materials, tools and labor you need? What's wrong with you?

The pressure to finish a project -- and prove your worth -- can be crushing. Moreover, there are so many examples in your real life, in the media and on social media that seem to prove just how pathetic you are: There are so many people doing incredible projects so much better than yours and with such rapidity.

A house project is a public display of your ability (and also therefore your inability).

With humility and resolve, I plodded forward: I was only going to go as fast as I could. Regardless, I wanted to do good work.

I keep track of my work (dare I call it progress?) with notebooks, photographs, diaries. I like to chronicle the passage of time, the slow changes, gradual inflection points of seasons.

It's not that I've been lying around, daydreaming and doing nothing. That hasn't been possible: There's simply too much to do for survival (without paying others to do the survival work for you).

The first year was spent dealing with emergencies: getting the electricity hooked up and installing a pump into the well; bringing water into the house; erecting a stove and stove pipe for heat; cutting back brambles and cleaning up junk around the property; combating mosquitoes by hanging nets over our beds; and understanding the nature around us, what each season brings.

By the end of the second year, more settled in, I'd pruned dozens of olive trees on the property, planted fruit trees and grape vines; built wattle fence gardens, and constructed a shed out of recycled doors and wood where I could store the sundry things we'd collected in the dry cement barn: tools, nails, olive nets, buckets, a plethora of wooden swords our boys had made, crates, a hoard of boards I'd salvaged from a friend's dismantled menagerie; and so many things so many good people donated to our project, including doors and windows that one day will be installed somewhere.

By then, another emergency had arisen: the need to make a living. Fortunately, I landed a full-time job in my old profession of journalism that allowed me to work from my new home in the wilds of Sicily.

The upside was that the house project could now proceed without too many financial worries. The downside was that my time to work on the house was immensely reduced.

My new challenge (emergency) became finding the time to build.

Finally, with all the stuff cluttering the barn gone, including our washing machine (relocated into an adjacent old stone "rustico," the original building on the property), I was ready to start on the kitchen.

The barn's cement floor was swept and ready for me to project the future on it: I stooped and drew my first lines of chalk where a counter and sink will go along the south-facing wall. There is already a window there that opens onto a dirt road running past the house. In the not-too-far distance you can see Pizzo Carbonara, the second highest peak in Sicily after Mount Etna. Those first chalk lines were easy to draw.

I needed to figure out the geometry of the kitchen to see where we needed power outlets for the refrigerator, a hot water heater and lights. We had decided to also build a kitchen island in the middle of the room; stooping, I approximated where I wanted the island to go and happily chalked its outlines.

Bit by bit, the work progresses: With heavy duty tools in hand and a cloud of cement dust around me, I find a few hours when I can to carve out channels in the cement floor and walls where electrical wiring will go.

With a hand-held jackhammer, I've been patiently chipping away at the floor too in an effort to lower it just a bit.

The jackhammer broke the other day. I got it fixed by a handyman in town, but it soon broke again. I will buy a new machine and, with the seasons warming up, work a bit longer into the evenings when the days permit. 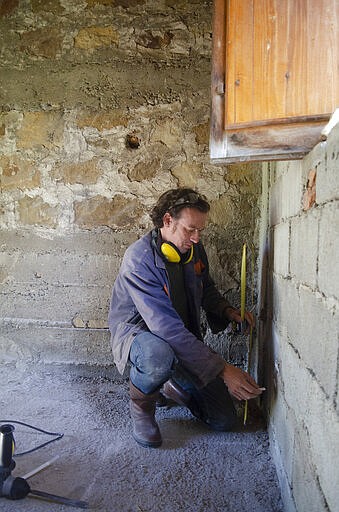 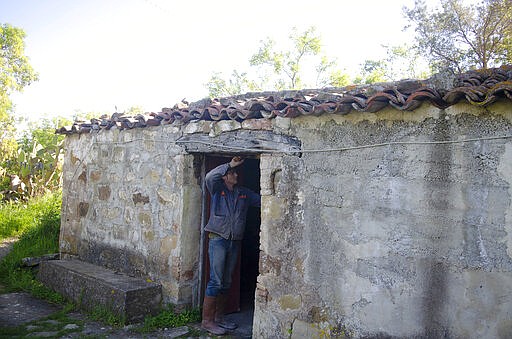 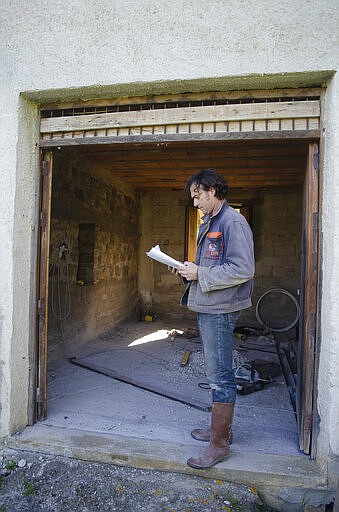 Cain Burdeau studies plans electrical circuits he plans to install at a country home he is renovating in Castelbuono, Sicily, on April 8, 2021. (AP Photo/Audrey Rodeman) 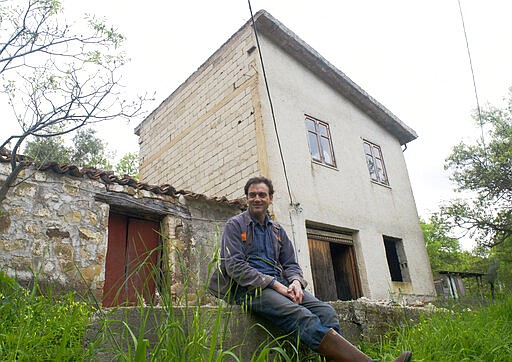 Cain Burdeau sits in front of former barns in Castelbuono, Sicily, on April 13, 2021, that he plans to convert into a family home. (AP Photo/Audrey Rodeman)
ADVERTISEMENT