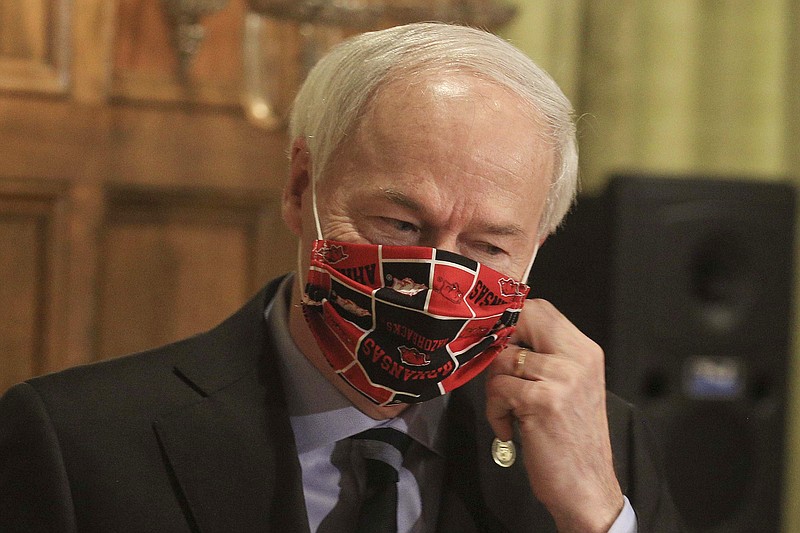 Gov. Asa Hutchinson takes off his Arkansas Razorbacks facemask as he arrives for the daily coronavirus briefing at the state Capitol in Little Rock on April 27. - Staton Breidenthal/The Arkansas Democrat-Gazette via AP

LITTLE ROCK -- Arkansas Gov. Asa Hutchinson signed into law Thursday legislation to ban state or local mask mandates for preventing the spread of the coronavirus, even though the prohibition will not take effect until later this summer.

Hutchinson last month dropped the state's mandate, but cities including Fayetteville and Little Rock were allowed to keep their requirements in place.

The bill is the latest measure the Republican governor has signed to curb the state's restrictions because of the pandemic. Hutchinson Wednesday signed bills prohibiting the state and local governments from requiring vaccinations against the virus or "vaccine passports" to access services.

The mask mandate ban does not prevent businesses from imposing their own requirements, unlike an earlier version of the bill Hutchinson had said he would veto. The new law doesn't take effect until late July at the earliest.

Hutchinson cited the delay in the prohibition taking effect and its exemption of private businesses.

"It is important to respect the individual decisions made by private businesses," Hutchinson said in a statement released by his office. "It also does not have an emergency clause, so the law will not go into effect until the current school year ends."

The measure doesn't apply to state-owned or state-controlled health care facilities, state prisons or facilities operated by the Division of Youth Services.