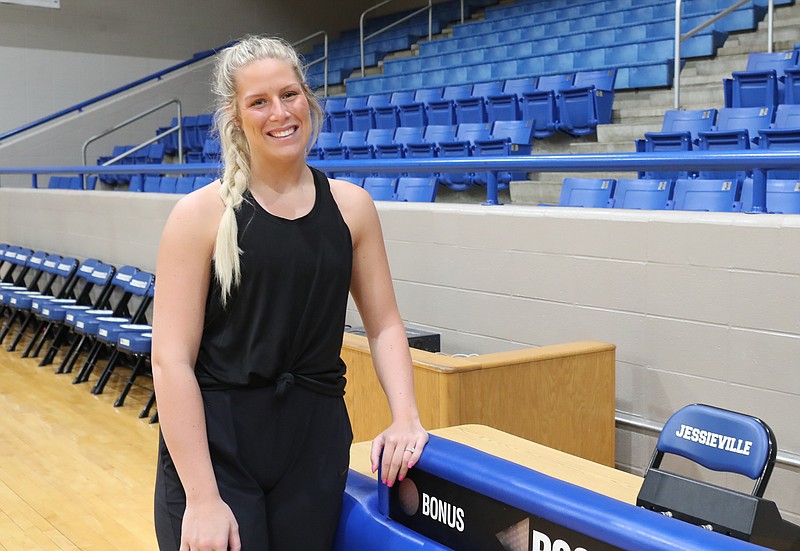 Former Jessieville standout basketball player Kellie Lampo is the new head volleyball coach for the Lady Lions. The Harding grad made the shift from accounting to coaching, picking up her first coaching position at her alma mater. - Photo by Richard Rasmussen of The Sentinel-Record

JESSIEVILLE -- With just under a month until their first game, the Jessieville Lady Lions have been hard at work with a new head volleyball coach.

Kellie Lampo, the best girls basketball player to hail from Jessieville, has returned to lead the Lady Lions volleyball team, despite not having played the sport competitively since she was a freshman in high school.

Despite not having played since 2013, Lampo said that "it's been an adjustment" to switch sports, but she has been able to learn from her older sister, Katie, who is a junior high volleyball coach at Bryant.

"My sister's a volleyball coach, so it's in the family," she said. "So I've still been around it for the past few years. But it's been a great adjustment, because volleyball is such a different sport than basketball is. Basketball is really physical, and it's all about strategy. And this is about footwork and your rotations and who needs to be where when, and it's just really good. It's just a different sport, different type of conditioning that goes with it, and it's just really a positive change to make."

Lampo did not intend to get into coaching, initially. She earned a bachelor's degree in accounting at Harding, but after the Lady Bisons lost to Southeastern Oklahoma State in the second round of the Great American Conference tournament in March, she had an epiphany.

"We're headed home from Oklahoma, and I looked at (head coach Tim Kirby) and I said, 'How can I get into coaching?' I was like a month away from graduating with an accounting degree," she recalled. "And he was just like, 'Are you serious about this?' I said, 'I think so, but I might just be like, sad that my last game's over.' So I went to work in a corporate job, and it just was not for me. And I just started making phone calls of 'What do I need to do to get back in the gym?' because I just feel like I have a lot to give in that area."

The decision to move from accounting to coaching came as a surprise to more than just her coach.

Despite the shock of her announcement, there has been plenty of support from her family.

"Me and my sister, we took a trip to Dallas," she said. "And the whole ride -- that whole five-hour car ride, she just helped me get back on my game with volleyball and making sure that I was aware of (what I needed to know) -- even drills, gave me ideas for drills and everything. So my family support is great, and my sister has been great to make sure that anything that I wanted to know, I could know because I want to be the best that I can be in this."

Despite having had multiple interviews in the business world, Lampo admitted that going into the interview for this job was the most nerve-wracking of them all.

"I have done several business interviews before, and I was never very nervous," she said. "But I was so nervous for this one because I knew everyone that was in that room. ... Everyone's been great, and it hasn't been too awkward because they're just very supportive of me, they're very helpful to me and trying to make sure that I am not lost, because it is a new thing, a new job. And so everyone's been so great answering my questions, and it is a little different being on this side. But everyone has welcomed me with open arms."

Just under two months into the job, Lampo feels that the players have been able to adjust well into the coaching change.

"They've all been very positive, encouraging and supportive," she said. "I couldn't have asked for anything better. Honestly, they've done great, and I think it helps because I am a familiar face to them. They were all in school here when I was in school here. And so it's good, and it's gone great so far. And I'm so excited to see what the year holds."

One of the big changes for Lampo has been her own mindset. When she was last on the court in Jessieville, it was a year of lasts, while this is a year of firsts.

"This is the year of the first for me, and I'm so looking forward to that," she said. "Like this is the first win that I get; this is the first time, you know, and I'm so ready to make those memories of 'these are the first.' And I have a great group of girls that are going to be able to give me a lot of good, good memories this year. So I couldn't ask for anything better for a first year to be excited about."

While any coach wants to see her team succeed, it's more than just wins and losses for Lampo.

"I think that is obviously going to be one of the most important things is to build a good winning program," she said. "But another huge thing to me is building really good people. Really good people because that's the most important thing. That's what they're gonna carry on with them for the rest of their lives is the lessons that they learn, and I truly believe that you learn some of the best lessons by being in sports.

"You learn time management; you learn organization; you learn how to be a teammate. You learn so much by being on a team, and I really want to put those lessons into these girls and make them really good, better people because at the end of the day, what really matters to me is 'How am I impacting them?'"

One of her biggest fears as a coach is not failure on the court, but failure as a coach.

While starting a new career path is stressful, Lampo has a huge personal milestone coming up as she prepares to marry Tristen Davis, who she has been dating since high school.

"We started dating when I was a senior here at Jessieville, so we graduated here together," she said. "And we made it all through college, and so, yeah, we're getting married in September."

When the pair started planning the wedding, Lampo was still planning to go into the business world.

"Accountants' jobs don't start until September, so I planned my wedding for September because I was like, 'Good, I'll start my job. I'll get married. It'll be great,'" she said with a laugh. "Volleyball season's in September, so now I'm getting married in the middle of September. So that's also been fun. It's been a really busy, fun summer because you're planning a wedding. I've had to start my master's so that I'm able to teach and get my license, and I'm coaching. So it's been a fun, busy summer. It went by so fast."