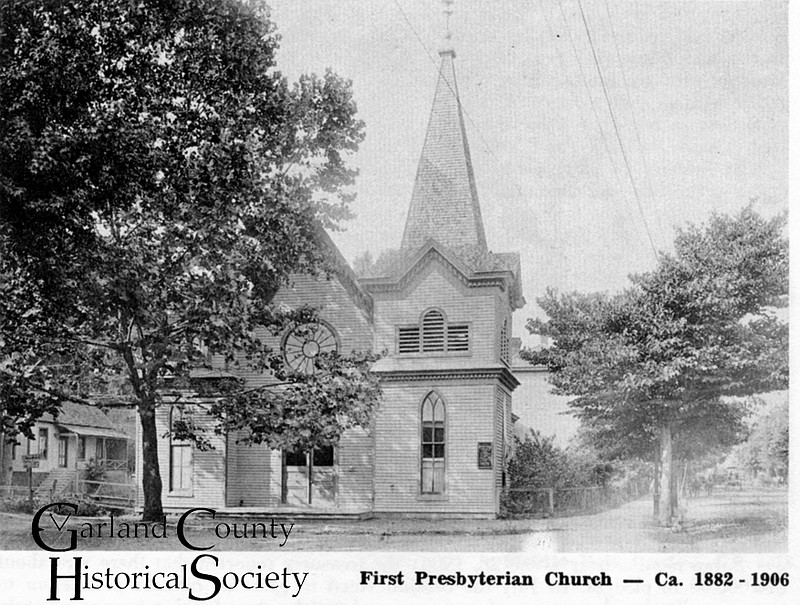 The First Presbyterian Church’s first building (1882-1906) was built on land donated by Hiram A. Whittington at 213 Whittington Avenue. The current church replaced this building in 1907.

In 1836, John C. and Sara Hale purchased land along both sides of what is now Bathhouse Row. While John built a bath house and hotel, Sara claimed part of their land for a church. Built in a stand of cedars and sweet gum trees in what is now the downtown vicinity of Diablos Tacos & Mezcal restaurant (in the former Bank of America building) the church was a fairly crude log building with a puncheon floor. The pews were simple split logs, each set on four pegs. Two windows at the back of the church opened into a gallery for slaves who wished to come to worship services. This ancestor of today’s First Baptist Church was the only church building in the town for many years.

During the Civil War, renegades burned down much of the town, including the church. In 1862, Sara built a larger, more comfortable church building next to the original Hale Bath House and Hotel. Because of the closeness of the thermal water, the church had a heated baptistery, a rare treat in those days.

In 1852, Samuel Morris came from Rockport and organized a Methodist congregation of 27 members who built a log cabin church at the corner of Central and Park avenues. This church’s descendant is the First United Methodist Church at 1100 Central Ave.

The first Episcopalian services in Hot Springs were in 1863. Meeting first in the Baptist church, in 1868 the congregation built a small frame church on Spring Street opposite the site of the present St. Luke’s. It was also the first year a group of slaves held church services under a brush arbor in the Whittington area. The congregation, Roanoke Baptist Church, erected a frame building in 1868 at the corner of Whittington and Ozark (and started the first school in Hot Springs for Black children).

Under a brush arbor in 1868, the Rev. Henderson Patillo organized the congregation that would become Visitors Chapel A.M.E. church. The land on Church Street where the congregation worshipped was soon donated to it by Joseph “Diamond Jo” Reynolds (the builder of the first railroad into Hot Springs), and the congregation of former slaves built a log cabin church. By 1913, the church was able to build a magnificent Gothic Revival and Classical Revival building that was put on the National Register of Historic Places in 1995.

In 1869, the first St. Mary’s of the Springs Catholic Church, a small, wood structure at the junction of Central and Whittington, was consecrated. To reach the church, parishioners crossed Hot Springs Creek on a footbridge that was chained to nearby trees. In 1872, Temple Beth Israel, Congregation House of Israel, one of the first Hebrew congregations in Arkansas, was organized by 20 local families who built a temple at Quapaw and Market in 1875.

In 1876, the Presbyterians formally organized here, meeting in the Baptist and then the Episcopal churches until they constructed their own building on Whittington Avenue in 1882. The First Presbyterian Church is still at its original location.

Many other churches have long histories here. Often starting under brush arbors, in log cabins, or in borrowed rooms, our dedicated religious congregations have been a dynamic force in the development of our community.