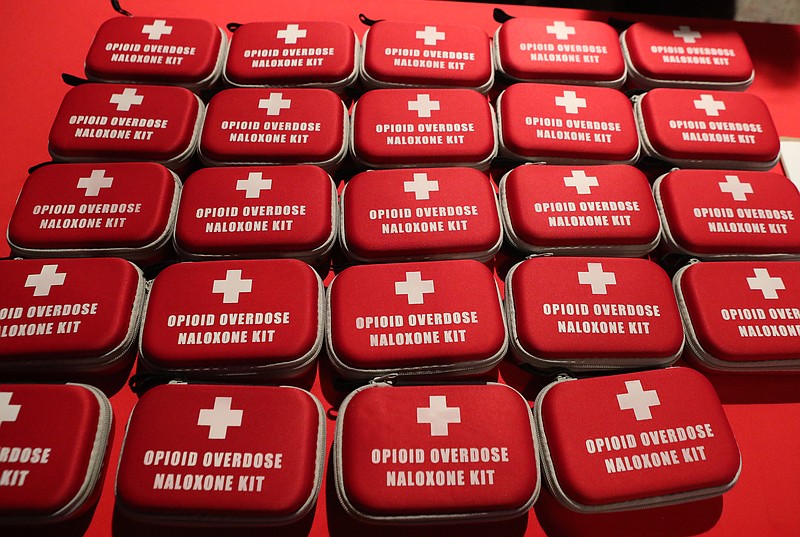 Some of the opioid overdose kits available at a NARCAN training event Thursday at LakePointe City Church. - Photo by Richard Rasmussen of The Sentinel-Record

NARCAN, the brand name for naloxone, is a medicine administered by nasal spray to people who are overdosing on opioids. According to the FDA, it rapidly reverses the effects of opioid overdose and is the standard treatment for overdose. It can be administered by anyone, which is one reason it has been credited with saving so many lives.

Carrie Montgomery, director of the Hope Movement, connected with Deputy Courtney Kizer through LakePointe Pastor Greg Bearss, and Montgomery was one of the first civilians to join the opioid committee within the sheriff's department.

"The importance of having this event today is opioid addiction is really misunderstood," Montgomery said. "In the 15 years that I was an addict, opiates were one of the worst parts of my addiction. I can't tell you how many friends I had that laid on the floor and died simply because people thought they were sleeping and really they were overdosing."

Before the presentation started, trainees took a pretest on their knowledge of NARCAN and opioid addiction.

Then, trainees received several statistics on opioid prescriptions and overdoses in Garland County.

Montgomery said per 100 people in the county, there are 146 opioid prescriptions.

"Which means me, you and my kid all have a prescription for opiates and me and you probably have more than one," Montgomery said.

After trainees received statistics on the opioid epidemic throughout the state, they were then trained on how to recognize the signs of an overdose and how to administer NARCAN.

"NARCAN is not a really known thing here in Garland County yet or Hot Springs," Montgomery said. "When I found out the Criminal Justice Institute was coming to train trainers I had to get in on that. That little red bag of NARCAN could mean the difference in life or death to somebody that's overdosing."

Kizer emphasized that addicts come from different backgrounds and for her, it's about changing the stigma around addicts.

"When you picture in your brain what an addict looks like or an opioid addict, we all get that image in our head," Kizer said. "But opioids are totally different than anything else. Because they are so easily accessible and prescribed to you legally, anybody has at one point in time probably had one."

One of the main purposes of Thursday's training was to illustrate how opioids affect the community whether someone is upper class, middle class, lower class or comes from a wide range of different professions.

"It's affected several people," Kizer said. "Numerous people in well-to-do jobs have lost their careers over this stuff."

The event also included a presentation from Deputy Candice Presley who described two times she administered NARCAN on emergency calls. Trainees also saw a video describing Sgt. John Schroeder's exposure to fentanyl while he was helping someone and how he had to take NARCAN himself.

Kizer noted some people might not want to be trained in giving NARCAN because they look at who they associate with and think they'll never need it. Kizer used Schroeder's story as an example of never knowing when one might need NARCAN.

At the end of the session, trainees received a NARCAN kit to have in case they ever need to save someone's life who is overdosing on opioids.

"When I was on opiates, NARCAN wasn't a thing yet," Montgomery said. "I wish it was because there's a lot of people that would probably still be alive today. ... It's something that I'm very passionate about definitely. This is something that we're very behind on compared to the rest of the United States." 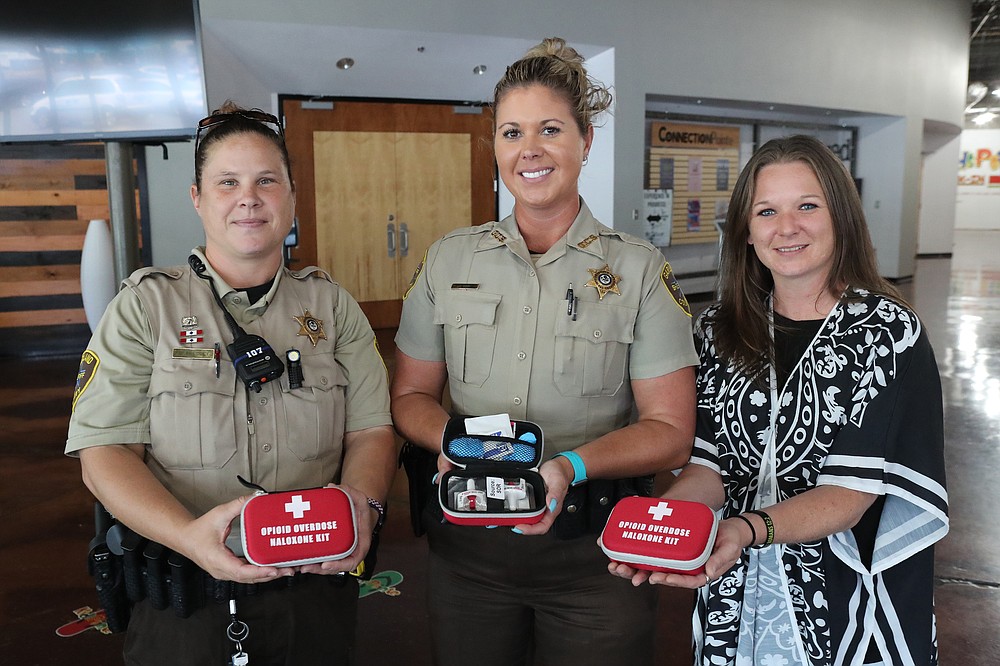