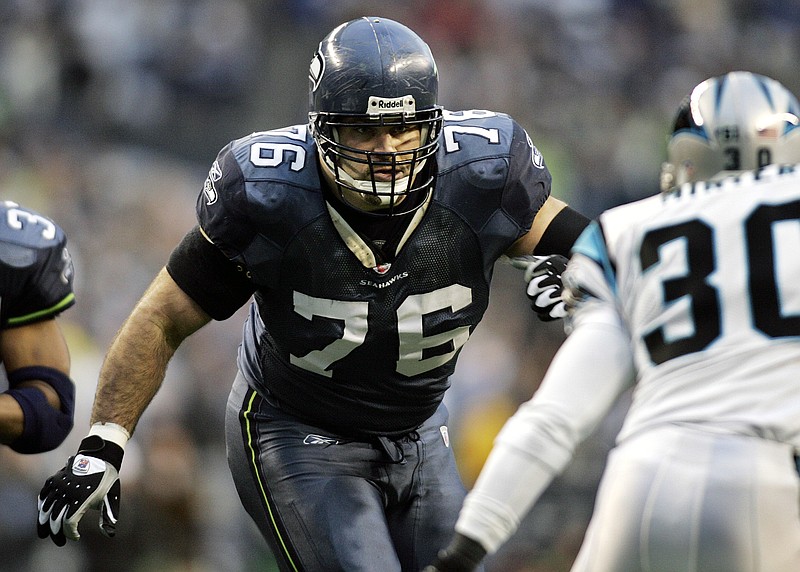 Seattle Seahawks offensive tackle Steve Hutchinson blocks against the Carolina Panthers on Jan. 22, 2006, during the NFC championship game in Seattle. Hutchinson set a lot of the standards for NFL guards during his 12-season career spent primarily with the Seattle Seahawks and Minnesota Vikings. After a one-year wait due to the COVID-19 pandemic, Hutchinson will be inducted this weekend into the Pro Football Hall of Fame. - Photo by John Froschauer of The Associated Press

MINNEAPOLIS -- The realization he could make a living in the NFL didn't actually dawn on Steve Hutchinson until his final year at Michigan, when he learned his status as a widely projected first-round draft pick.

As soon as the Seattle Seahawks made good on that potential by taking him 17th overall in 2001, Hutchinson fast-tracked his goal-setting for one of football's most unglamorous jobs.

Just because he was a left guard didn't mean he had to be left out of the game's greats.

"If you're going to do it, you might as well be the best. That was kind of the mindset I had," said Hutchinson, whose exemplary performance over a 12-season career that also featured a long stay with the Minnesota Vikings will be honored this weekend with his induction into the Pro Football Hall of Fame in Canton, Ohio.

Recruited by the Wolverines out of Coral Springs, Florida, as a defensive tackle, Hutchinson switched sides as a redshirt freshman and became only the fourth player in Big Ten history to make first team all-conference four straight years.

He immediately thrived with the Seahawks on an outstanding offensive line -- with eventual Hall of Famer Walter Jones at left tackle, Robbie Tobeck at center and Chris Gray at right guard -- that set up Shaun Alexander for a gaudy season rushing average of 1,500 yards and 17 touchdowns over his first five years. The final season in that span, 2005, culminated in an NFL MVP award for Alexander and a spot in the Super Bowl for Seattle.

The group enjoyed such synergy that opposing defensive linemen often remarked to them about how difficult they were to play against, not only because of skill but smarts.

"We didn't need to make calls because we just kind of knew. It was just kind of telekinetic. We just knew when we got a certain look what we were going to do, and we didn't have to say anything," said Hutchinson, who was listed at 6-foot-5 and 315 pounds during his playing days.

As athleticism in the game continued to advance and strategy followed suit, guards during Hutchinson's era took a step forward in importance, even if most casual fans couldn't name any.

One of the other guards who played in Super Bowl 40, Alan Faneca of the champion Pittsburgh Steelers, will also have his Hall of Fame induction this weekend. Hutchinson was in the 2020 class, but had to wait a year because of the COVID-19 pandemic.

"It is a position that's hard to watch on TV because it gets lost from the camera angles. Most times you're only getting your name called when there's a flag on the field, and that won't change, but most offensive linemen don't do it for the glory," Hutchinson said last month.

His departure from the Seahawks certainly helped elevate his profile.

Slapped with the transition tag to keep him from entering unrestricted free agency after the team never engaged in serious negotiations about an extension, Hutchinson signed an offer sheet with the Vikings that the Seahawks planned to match.

The problem for them was the richest contract ever at that point for an NFL guard -- $49 million over seven years with $16 million guaranteed -- contained a "poison pill" in it that Hutchinson's agent, Tom Condon, devised to try to enhance the earning power of such transition players. The provision said that if Hutchinson was not the team's highest-paid offensive lineman, the entire $49 million would become guaranteed. For the Vikings, that wasn't an issue. For the Seahawks, it was because Jones was making more money.

Hutchinson left for Minnesota, and the league closed the loophole.

According to salary data compiled by Spotrac.com, there are 15 guards in the league currently with a higher annual average contract value than what Hutchinson signed for 15 years ago. Washington's Brandon Scherff is playing this season on a franchise tag for slightly more than $18 million.

With the Vikings, Hutchinson only got better. In his first year, Chester Taylor rushed for 1,216 yards. Then along came Adrian Peterson in 2007, when he set the all-time single-game rushing record (296 yards) and compiled over his first four years a rushing average of 1,445 yards and 13 touchdowns. Hutchinson took just one penalty over his first three seasons in Minnesota, a false start in 2007. According to Pro Football Reference data, he had 19 accepted infractions in his career and only 11 for holding.

When Brett Favre arrived in 2009, the Vikings had assembled a team that was even more potent than the 2005 Seahawks. They went all the way to the NFC championship game, infamously losing at New Orleans in overtime after a 12-men-in-the-huddle penalty preceded an ill-advised throw for an interception by Favre late in the fourth quarter when the Vikings were driving for the potential winning kick.

"We felt strongly enough that if we were able to make it on to the Super Bowl, there was no doubt that we would have won that game," Hutchinson said.

The Vikings faltered badly in 2010 and 2011, and Hutchinson was released for salary cap savings with one year left on that precedent-setting deal. He spent 2012 with the Tennessee Titans, before retiring in Nashville with his family.

Once his eligibility for Canton came up, there was little question about him getting in with those seven Pro Bowl picks, five All-Pro selections and a consecutive starts streak that reached 123 straight regular-season games.

"Man, Steve was massive out there. I mean, it was tough to get around him, and he was so patient and strong," said former Vikings defensive tackle Kevin Williams, a five-time All-Pro himself who regularly faced off against Hutchinson in practice and was planning to attend the ceremony. "If I'm going against one of the best guys in the league at guard, that's only making me better come Sunday against these other guys who are not on his level. So I looked at it as a badge of honor." 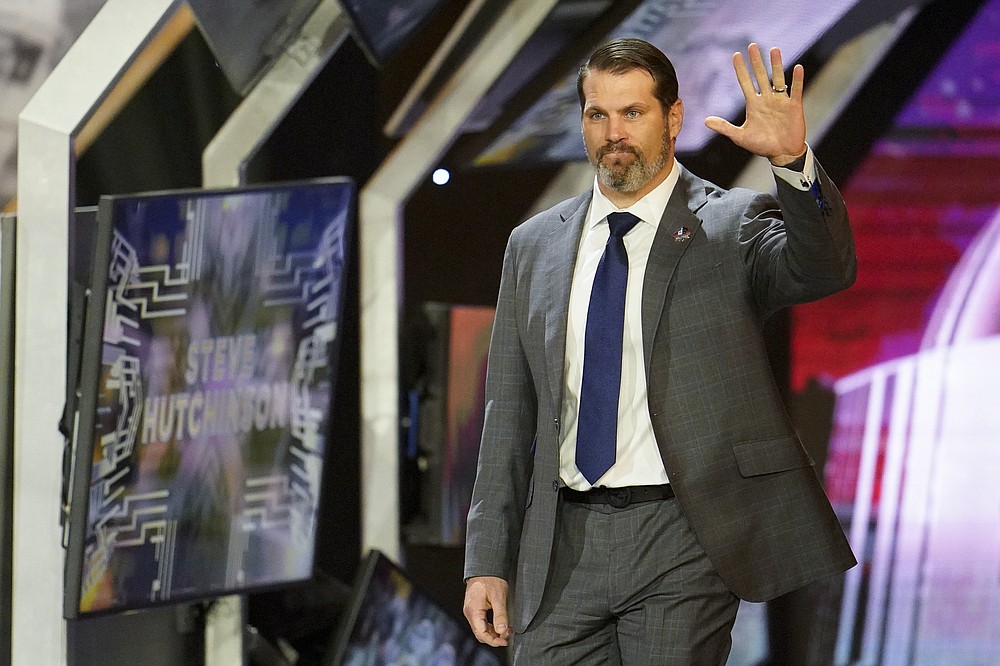 FILE - Hall of Fame Class of 2020, Seattle Seahawks' Steve Hutchinson waves at the NFL Honors football award show in Miami, in this Saturday, Feb. 1, 2020, file photo. Hutchinson set a lot of the standards for NFL guards during his 12-season career spent primarily with the Seattle Seahawks and Minnesota Vikings. After a one-year wait due to the COVID-19 pandemic, Hutchinson will be inducted this weekend into the Pro Football Hall of Fame. (AP Photo/David J. Phillip, File) 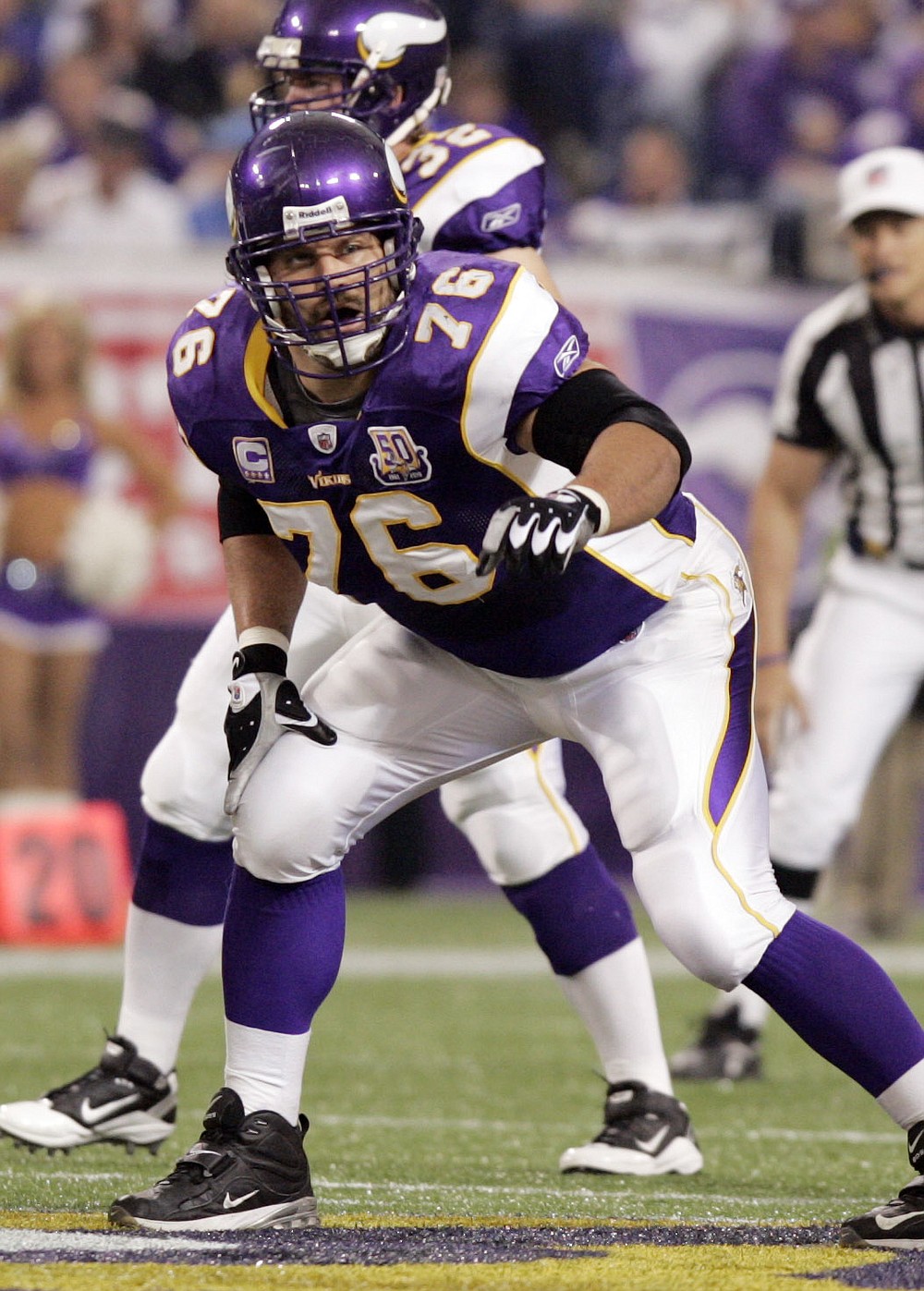 FILE - Minnesota Vikings guard Steve Hutchinson (76) lines up for a play against the Detroit Lions during an NFL football game in Minneapolis, in this Sept. 26, 2010, file photo. Hutchinson set a lot of the standards for NFL guards during his 12-season career spent primarily with the Seattle Seahawks and Minnesota Vikings. After a one-year wait due to the COVID-19 pandemic, Hutchinson will be inducted this weekend into the Pro Football Hall of Fame. (AP Photo/Andy Blenkush, File)