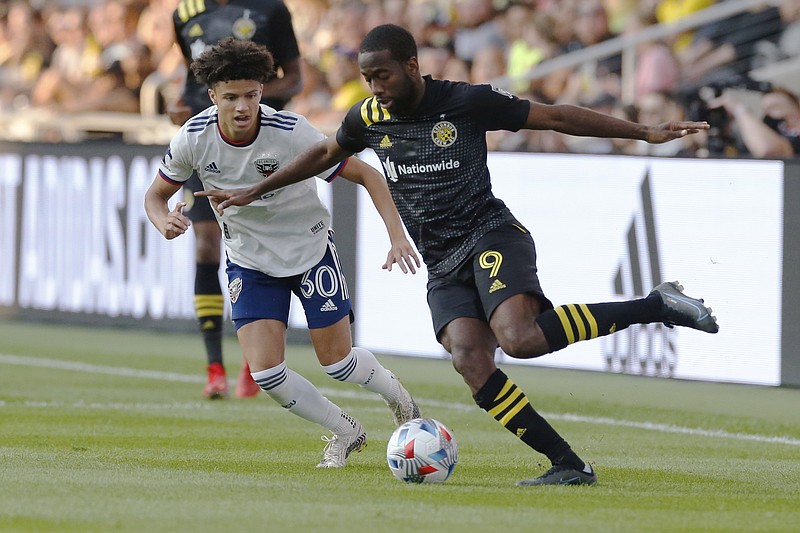 Columbus Crew's Kevin Molino, right, dribbles the ball next to D.C. United's Kevin Paredes during the first half of Wednesday's MLS match in Columbus, Ohio. - Photo by Jay LaPrete of The Associated Press

Reyna dispossessed Aboubacar Keita in the attacking half, Kamara took the ball and beat goalkeeper Eloy Room to make it 1-0 in the 19th minute. Reyna headed home a cross by Andy Najar in the 40th, and Kamara converted from the penalty spot in first-half stoppage time to give D.C. United (7-7-3) a 3-0 lead at halftime.

Kevin Molino scored in the 65th minute and Lucas Zelarayán added a goal in the 71st to pull Columbus (6-5-6) to 3-2, but Reyna slipped a left-footer between a pair of defenders and inside the post to cap the scoring in the 74th minute.

SEATTLE -- Franco Jara scored in stoppage time to give FC Dallas the tie with Seattle.

Jara redirected a cross by Nkosi Tafari in the first minute of injury time to pull Dallas (4-7-6) even.

Fredy Montero headed home a perfectly placed free kick from João Paulo to give the Sounders (9-3-6) a 1-0 lead in the 72nd minute.

FOXBOROUGH, Mass. -- Joe Willis made six saves for his MLS-leading eighth shutout of the season and Nashville tied New England.

New England goalkeeper Matt Turner returned from the Gold Cup to make two saves for his fourth shutout of the season.

CHESTER, Pa. -- Jakob Glesnes, Daniel Gazdag and Sergio Santos scored in the first half and Philadelphia Union cruised past Toronto.

Toronto (3-9-5) is 2-1-3 under interim coach Javier Perez. He took over July 4 after Chris Armas was fired in the wake of a six-game losing streak.

Austin took a 1-0 lead in the seventh minute when Pochettino's shot went off the post and deflected off Houston defender Zarek Valentin for an own goal. Pochettino gave Austin a 2-1 lead in the 45th, and Domínguez made it 3-1 in the 56th.

Tyler Pasher and Fafà Picault scored for the Dynamo. Houston's Darwin Cerén received a straight red card in the 20th minute for a hard foul on Sebastian Berhalter.

New York City (8-5-3) played a man down after Keaton Parks was shown his second yellow card in the 73rd minute. Chicago (3-9-5) has lost only two of its last eight games after losing seven of its previous eight matches.

HARRISON, N.J. -- Kenneth Vermeer made three saves for his fifth shutout of the season and FC Cincinnati tied New York.

Cincinnati (3-7-6) has lost only two of its last nine matches -- with four clean sheets. New York (5-7-4) had its winless streak extended to five matches.

Montreal (6-6-5) ended a three-game losing streak in front of the first general-admission crowd at Stade Saputo since the beginning of the COVID-19 pandemic.

Gibbs flicked in a header off an entry by Victor Ulloa to tie it in the 66th minute. The 31-year-old played 14 seasons in the English Premier League before signing with Inter Miami (3-8-4) in March.

Álvarez started a give-and-go at the corner of the 18-yard box and calmly curled it around goalkeeper Zac MacMath from a difficult angle.

PORTLAND, Ore. -- Felipe Mora scored in first-half stoppage time to pull the Timbers into the tie with San Jose.

The Earthquakes (4-7-6) struck first with a second-chance goal from Javier López in the 25th minute. The Timbers (6-8-2) tied it on Mora's flick off a pass from Bill Tuiloma just before the break. 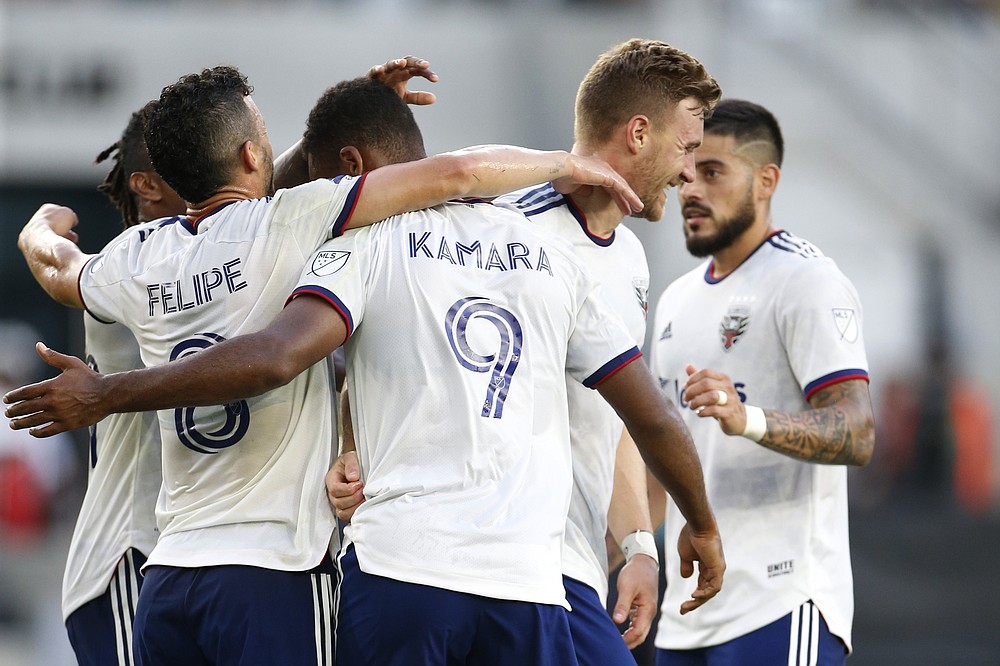 D.C. United players celebrate a goal against the Columbus Crew during the first half of an MLS soccer match Wednesday, Aug. 4, 2021, in Columbus, Ohio. (AP Photo/Jay LaPrete)