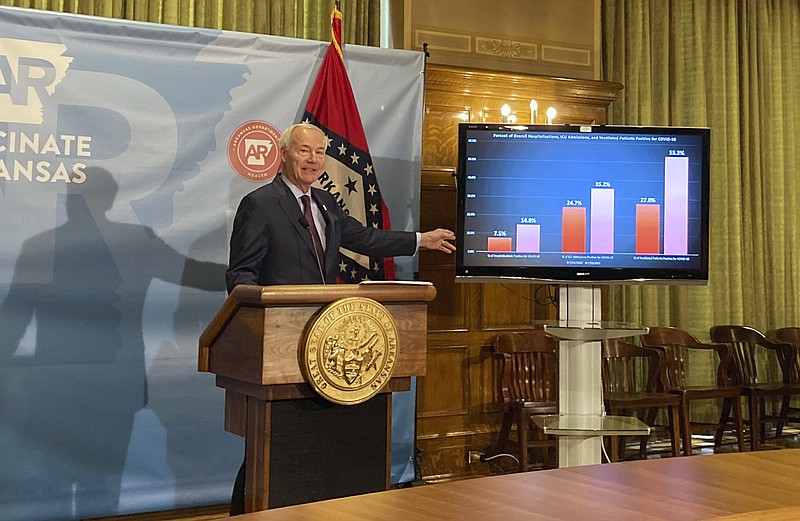 Arkansas Gov. Asa Hutchinson stands next to a chart displaying COVID-19 hospitalization data as he speaks at a news conference at the state Capitol in Little Rock, Ark., Thursday, July 29, 2021. Hutchinson announced he was calling a special session to take up a proposal to lift the state&#x2019;s ban on face mask mandates in public schools. (AP Photo/Andrew DeMillo)

LITTLE ROCK -- Arkansas' ban on mask mandates faced new legal challenges -- including from a school district where more than 800 staff and students are quarantining because of a COIVD-19 outbreak -- and defiance from the mayor of the state capital as Republican lawmakers rejected efforts to roll back the prohibition.

Hutchinson called the Legislature back into session this week to consider rolling back the ban for schools but faces heavy opposition from fellow Republicans. Hutchinson has faced growing calls to lift the ban as Arkansas' coronavirus cases spiral ahead of classes resuming statewide later this month.

But a House committee Thursday rejected two proposals to allow school boards to require masks in buildings where children under 12 may be present. The move means lawmakers on Friday will likely adjourn the session called to revisit the bans without any action on the issue.

The schools' lawsuit argues that the ban violates Arkansas' constitution. It seeks a temporary order blocking the prohibition while the lawsuit is considered.

"No rational reason exists for denying public school students, teachers and staff, and the school boards which are obligated to keep them safe, the ability to ensure that all who work and learn in our public schools are as safe as possible," the lawsuit said.

Little Rock Mayor Frank Scott's order would only apply to city-owned parks and facilities, but Scott also urged private businesses to require masks. The rule takes effect on Friday and will be in effect through the end of the month.

"It is time to act. It is time to do what is best for the residents of Little Rock," Scott said at a news conference at city hall.