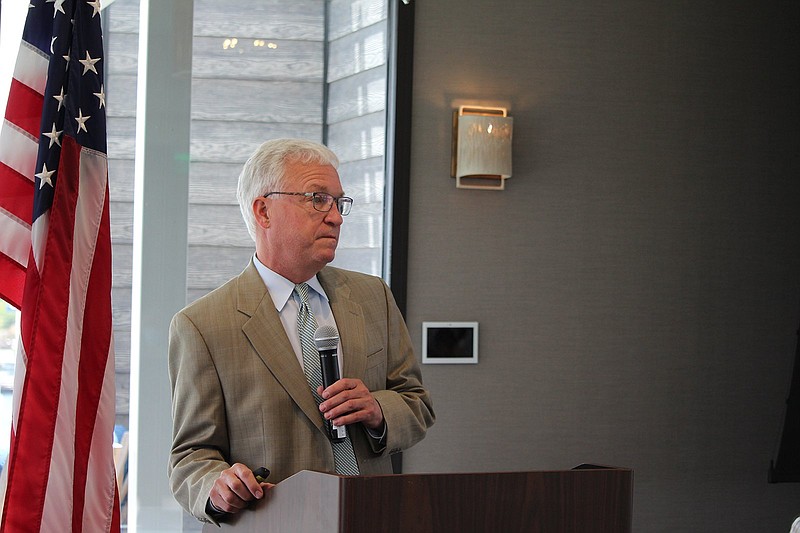 Dr. Joe Thompson speaks to the Hot Springs National Park Rotary Club about the state of COVID-19 in Arkansas on Wednesday. - Photo by Krishnan Collins of The Sentinel-Record

The delta variant continues to cause a spike in the number of new COVID-19 cases in Arkansas and one member of the state's medical community emphasized the effectiveness of vaccines at Wednesday's Hot Springs National Park Rotary Club meeting.

"We're in a worse situation now than we've ever been in this COVID pandemic since it started a year and half plus a little more ago," Thompson said during the meeting, held at the DoubleTree by Hilton Hot Springs.

He noted Arkansas reported 3,000 new cases during the latter part of last week and added the state is not fighting the same virus it was a year ago, but instead it is fighting a mutated virus.

"Over the last two or three weeks we have really lost control here," Thompson said. "We're on this upward spike as a nation that is actually on a steeper slope than we were originally last year. The slope of that line going up is much steeper than it was except for maybe back in November when we had the holidays and other issues."

Since the delta variant is a mutated version of the original COVID-19 virus, it has become more contagious and to some people, more harmful.

Thompson described COVID-19 vaccinations as an "offensive weapon" to use against the virus.

He acknowledged that some people might have reservations about the vaccines because of how quickly they were developed.

However, he dispelled those reservations and explained the technology behind Moderna and Pfizer vaccines.

"They took a picture, a DNA profile of the virus," Thompson said. "And in those vaccines, they give your immune system a picture of what the spike looks like without necessarily exposing you to the virus itself. It sort of gives your immune system this FBI most wanted list picture so that when the virus comes in contact with you, it's able to resist the infection and fight it off."

The Moderna and Pfizer vaccines use messenger RNA to create that DNA profile of the virus. While mRNA usage in vaccines is somewhat new, Thompson said the FDA actually approved a vaccine for Ebola in 2019 that uses mRNA.

"The pharmaceutical companies have been working, using this messenger RNA stuff since the Ebola outbreak in 2014," Thompson said. "They were using and developing the technology of the messenger RNA, the FDA approved an Ebola vaccine in December before all this stuff started."

When it came to the COVID-19 vaccines, Thompson said the FDA conducted three different stages of tests to make sure the vaccines were safe and effective.

"They found that these vaccines, at least on the parent virus, were over 95% effective and incredibly safe," Thompson said. "The flu shot is about 60% effective. So that's how remarkable some of this new technology is on the original parent vaccine."

He noted the reason the vaccines have only received emergency approval and not full approval is that for most vaccines, the FDA usually waits to see how long the immunity from a vaccine lasts after it is given.

The FDA tends to follow participants in trials to see when the participants' immunity decreases. Then, the agency is able to tell people when they will need a booster shot.

Thompson said in the next few weeks, if not sooner than that, he expects the FDA to give the Moderna and Pfizer vaccines, along with the Johnson & Johnson vaccine, full authorization.

"What I'll tell you on each of the three vaccines, they are incredibly, they were incredibly effective," Thompson said. "And I think they are still effective at avoiding hospitalization and death with the delta variant."

The Johnson & Johnson vaccine uses older technology where a version of the virus that cannot replicate nor make a person sick is injected into a person's arm to create that profile of the virus that the body can then fight.

Thompson also acknowledged the existence of breakthrough cases, where vaccinated people get infected with COVID-19. He said although breakthrough cases do happen, the vaccines help prevent hospitalizations and bad outcomes.

He also mentioned the very rare side effects that have happened to a small number of people who received the vaccine but emphasized how unlikely the side effects are to happen.

A small handful of women who received the Johnson & Johnson vaccine got a rare type of blood clot.

"And so that's when they halted that vaccine for two weeks or 10 days to actually get information out to the clinical community of what to watch for," Thompson said. "So again, that's less than 200 folks out of 100 million."

The last side effect Thompson mentioned was that some teens, especially boys, came down with a very mild case of inflammation around the heart that was easily treatable with steroids and said, "almost none of those teenagers required any hospitalization."

"Now we do have an offensive weapon, our vaccines, and I want to pause on this for a second because I think some of the hesitancy around the vaccines are because of the speed with which it was developed and obviously the political polarization that it came under the umbrella on," Thompson said. "But at least the Moderna and the Pfizer vaccines are really remarkable new technology."

Across the state, Thompson said COVID-19 patients are getting younger.

Adding on to those who experience symptoms relatively quickly after getting infected, Thompson also mentioned long-haulers.

In a study where 20,000 people tested positive but said they were not necessarily sick, around 13% had symptoms three months later.

"About 10% had symptoms 12 months later," Thompson said. "So for about 10% of folks, this thing is a long-haul issue. And it does appear that is affecting younger adults too."

Thompson highlighted how the increase in the number of cases has caused hospitals to have to expand their capacities. When a hospital expands its capacity, it does not just put a strain on the equipment in the hospital, but also puts a strain on the staff.

"No hospital CEO ever wants to say they're in trouble, our hospitals are very, very on the edge, both in terms of the people that they have in the hospital," Thompson said. "But our teams have been going at this for a year and a half now and they're tired. ... And so this is really a burden that it's important for us to do all that we can to try to reduce that burden."

There is one promising trend Thompson noted he has seen with the delta variant. He said when the delta variant hit India and the United Kingdom hard, both places had a big spike then a pretty quick drop-off.

"You know, in any forest fire, it runs out of wood at some point in time, and it comes back down," Thompson said. "And I think that's what we're in now. We're in a delta variant forest fire."

Thompson said at some point in time the country will reach herd immunity whether it's through vaccinations or infections, but he questioned the human cost of getting through to that point.

As students return to school over the next few weeks, Thompson recommended putting masks and other safety measures back in place.

"You know, we need to be in school, I'm not going to disagree with that," Thompson said. "I just think we're in a spike now and we need maybe the next 30 or 60 days to put all of our defenses back in place. So that if that spike comes down by October, we might be in a much more normal situation."