Deputy Kizer throws her heart into the world of law enforcement 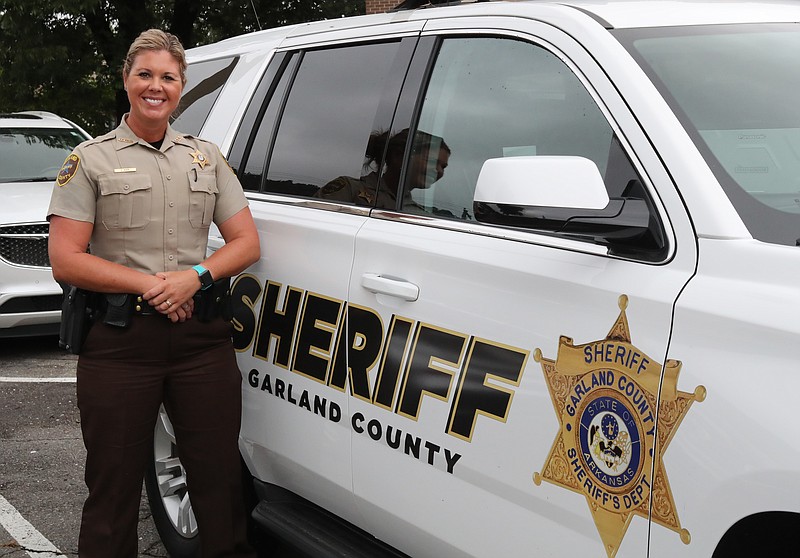 Growing up in California and listening to stories from her father about his time in the military police, Deputy Courtney Kizer always knew she wanted to work in law enforcement.

Now the Garland County Sheriff's Department public information officer, Kizer took a path that saw her travel across the country coast to coast before arriving in Hot Springs.

A Huntington Beach native, Kizer worked in a surf shop a large portion of her life.

"The cops that worked downtown, they would come in and I put them at the top of the bar as being the most professional and having the most integrity and it was something I always wanted to do," Kizer said.

"I ended up quitting; our team wasn't very good at Cyprus University," Kizer said. "Came back, my mom always talked to me about being a flight attendant."

Kizer even completed a course on what it took to be a flight attendant.

"That instructor said it was really hard to get hired," she said. "So I'm very competitive so of course I went out and put my application in. I ended up getting hired. I did not do any research on the airline and I ended up working for US Airways in Boston so I couldn't have gotten any further away."

Having only traveled as far east from California as Texas growing up, Kizer faced the challenge of learning all the acronyms for East Coast airports she had little idea about.

"And that was really, really hard," Kizer said. "In fact, I almost didn't pass that portion because half these places I didn't even know where they were at."

Kizer also had to learn the ins and outs of every aircraft US Airways operated, where a bomb might be, how many passengers the aircraft held and she was basically on call for two years with no time off.

She spent three months in Pittsburgh learning about the job and then only had a week to find living arrangements in Boston. Even with all the challenges, Kizer said it was a lot of fun.

However, after 9/11, many airlines laid off some of their employees and Kizer lost her job.

After returning home to California, she wasn't yet 21, so she couldn't become a police officer. Instead, she worked two jobs, one as a model and one doing makeup at Sephora, before joining the military.

"If I could enlist right into the military as a police officer then it would give me some experience so then when I got out hopefully that would help," Kizer said. "I knew, for me as a female, in some families when you go into the military it's something you have to do, for me it was a choice."

Kizer joined the Navy and became a master-at-arms, working onboard the USS Theodore Roosevelt and the USS Kearsarge before getting out in 2005 and moving to Hot Springs.

"I was married out of the military and my ex-husband was from here," Kizer said. "I have a son. At the time it was going to be a lot cheaper to start my family here in Arkansas than it was living a half-mile from the beach. California is rather expensive."

For Kizer, working in law enforcement is about making a difference in her community and being there for others. Things she dealt with in the past influenced her approach in her career.

In school, as a 6-foot-tall female, Kizer said she was bullied and sometimes she would come home crying. She also dealt with other challenges throughout her life.

"Some people know about this, some people don't; I'm not ashamed of it, but I'm also a survivor of sexual assault as a child," Kizer said. "So I think I've just gotten to a place in life kind of experiencing a lot of things that ultimately I feel like I'm no better than anybody."

Kizer said she's there for people to talk to and she's extremely proud of law enforcement. When she recruits new officers, she looks for candidates that ultimately just have a heart for the job.

"I'm here to learn from everybody and hopefully by them having somebody in a uniform who doesn't act like they're better than everybody and is just literally here to talk to them can help," Kizer said.

As a woman in law enforcement, Kizer has always dealt with being in the minority. When she joined the Navy, she said there were only four females on her ship.

When she first arrived at the Hot Springs Police Department, there were only around five or six women.

Kizer didn't grow up around guns, so she really had to train in that area. She met her current husband at the Hot Springs Police Department and he was a firearms instructor who really pushed Kizer in her training.

When she was just a rookie, the department received a call in reference to a drunken driver who got into a wreck where a child was ejected from the vehicle.

"So the typical stereotype is that females being moms and having that maternal instinct that you can't handle situations like that," Kizer said. "I was going through my head, you know, what if I'm walking and it looks just like my son and I find this child. How am I going to react? I need to make sure I don't cry. You know I'm a rookie and I have to handle it a certain way."

However, it turned out the driver was so drunk that his child was never actually in the vehicle.

"I remember thinking that a lot of males in this line of work are going to have a stereotype of how females act and that they have to be there to take care of us," Kizer said. "And my main goal was to be a team player and that they can count on me to back them up just as much as they can another male."

Kizer said it's huge to have women in law enforcement roles. To her, women are better communicators and she also believes in "50/50." The principle behind 50/50 is that women can do what men can do.

Male or female, Kizer emphasized everyone in the department and the community is working together as a team to solve the community's problems.

She encouraged women and young girls looking forward to a career in law enforcement to find their love and their calling.

"I would tell them to follow their heart," Kizer said. "To learn everything they can because it's very satisfying when you are able to teach people your knowledge or when you realize you've done something well. I would tell them don't try to compete with males. Just be yourself."

She served on the Arkansas Police Association Honor Guard where she traveled around the state and performed funeral services for officers who died in the line of duty.

She also takes pride in her role as a law enforcement fitness specialist. Whoever she's around, Kizer tries to help them figure out the healthiest lifestyle to live.

"I'm proud of the fact I'm a law enforcement instructor with my advanced certificate," Kizer said. "Teaching is something I love to do. So I love sharing what I do every day."

The list of achievements stretches on for Kizer and one of the most rewarding parts of her job is the fact her family lives a law enforcement life.

Kizer's 16-year-old son attends events with her, and her husband is retired law enforcement.

"I have times that probably stick out the most when I wasn't trying," Kizer said. "If I went to a call where someone was thinking about taking their own life, a little action I didn't think made a difference then, that person came up to me later on and told me you're the only one that called me out and if it wasn't for you I would have done something else. That's huge to me."

"I think we really built some phenomenal programs at the Hot Springs Police Department and most importantly got back involved in the community," Kizer said.

She said in 2009, law enforcement was not going to local schools and speaking to kids. For around six months she reached out to every school in the area asking them if the department could speak to children of all ages.

Kizer and Sheriff Mike McCormick started the first First Responders Trunk or Treat which is now Boo with a Badge.

She emphasized it's not just the Hot Springs Police Department and sheriff's department that serve the community.

When Kizer speaks with schools or the community about law enforcement she mentions how National Park Service, the Arkansas State Police, Arkansas Game and Fish, the two departments and the city all need to work together.

"We have 13 volunteer fire departments and I really wanted to strengthen the relationship with them, strengthen the relationship with LifeNet, with our state troopers," Kizer said. " There's more than just us that serves this community and there's more than just the Hot Springs Police Department that serves this community. That's important to me that they know. So we started a lot of great programs."

"I'm not somebody who likes to have a middleman so I noticed that when we were dealing with missing persons or runaways somebody would do a report and it was going to an investigator who had a lot of work on his plate," Kizer said. "So I took that off of his plate and now I'm over that."

Outside of her work in law enforcement, Kizer has coached travel volleyball for 10 years and holds a passion for sports.

"We are a sports family," Kizer said. "We go and we try to support any of the kids we've met along the way in their endeavors of what they do and just kind of be there for them if they need somebody to talk to. I believe every kid needs somebody in the stands cheering for them so we try to be that for them."

Back in the world of law enforcement, Kizer said the sheriff's department has made a lot of changes over the past two years and she thinks they are for the best.

The attention Kizer has received over the past couple of years continues to blow her mind.

Print Headline: Deputy Kizer throws her heart into the world of law enforcement