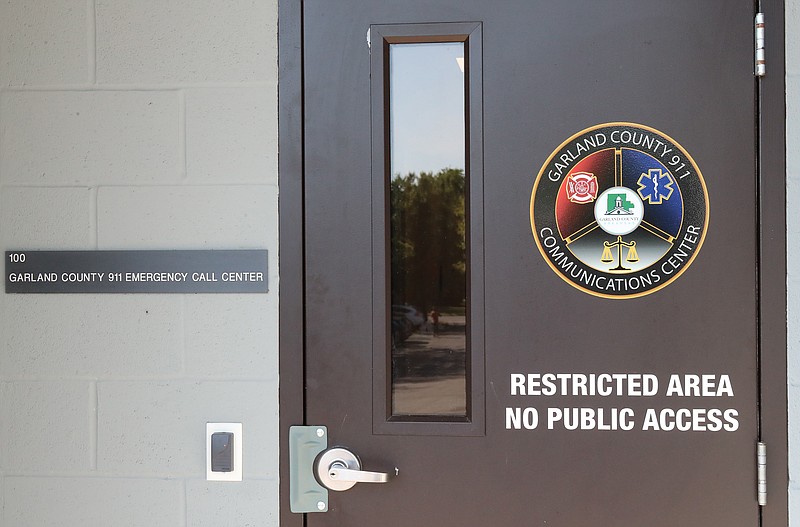 An outside entrance to the Garland County 911 Emergency Call Center. A report presented to the Arkansas 911 Board recommended 911 services in Garland County be consolidated into the county’s 911 Communications Center. - Photo by Richard Rasmussen of The Sentinel-Record

The recommendation took the city by surprise, given that Federal Engineering advised it to expand the PSAP/dispatch center inside the police department as part of the more than $6 million communications upgrade the city's been working on since 2017. That expense included the $415,062 contract the Hot Springs Board of Directors awarded Federal Engineering for consulting services.

Federal Engineering is the company "we used to come up with our radio communication plan as well as our PSAP dispatch plan," City Manager Bill Burrough told the board at its 2022 goal setting/budget priorities work session last month. "We've invested several million dollars in our communication and 911 dispatch center.

Burrough said the city is no longer working with the Virginia-based company.

"I feel like Federal Engineering owes us some money," he told the board. "We've already notified them to cease and desist any work for the city of Hot Springs. I don't want another bill from them."

Federal Engineering recommended counties or jurisdictions with populations of less than 150,000 have only one state-funded primary PSAP. The state contracted the company to outline a plan for reducing the number of PSAPs from more than 100 to fewer than 80, a reduction mandated by the Public Safety Act of 2019.

Primary PSAPs, which can receive 911 calls and dispatch emergency personnel, are supported by fees telecommunications providers collect from customers. The 2019 law doubled the monthly surcharge from 65 cents to $1.30 per device, an increase intended to narrow a $20 million shortfall in collections and statewide 911 operations.

The public safety surcharge helps support the city and county's primary PSAPs. The county projected a $1.6 million allocation, according to the 2021 budget the Garland County Quorum Court adopted. The city's population-based share of the $1.6 million was budgeted at $573,000.

County Judge Darryl Mahoney said the area's tourism industry can increase the number of people in Garland County by as much as 75% on busy weekends, creating higher call volumes than similarly sized or larger counties.

The 911 Communications Center the county built in the old detention center next to the sheriff's department has five consoles. The facility has the capacity for twice that number, the county's Office of Emergency Management Director Bo Robertson said.

"We have five fully functioning 911 and dispatch stations on the floor," he said. "We have the blueprints, the data drops, the power drops, everything already terminated in the wall for an additional five fully functional dispatching and 911 stations.

"We could effectively double our 911 call taking and dispatching capabilities on the floor now. All of that stuff is already terminated in the wall and the conduit ran back to the server room."

Former City Manager David Frasher rejected a 911 consolidation proposal the county floated in late 2016, telling The Sentinel-Record the city wanted to retain its own policies and procedures for answering 911 calls and dispatching emergency personnel.

Since then the city has cited other impediments, such as software incompatibility, to consolidation. Spillman Technologies is the city's computer-aided dispatch software provider, and Southern Software powers the county's dispatching system. The city has said their incompatibility makes a merger impractical and cost-prohibitive.

"If the city and county agree to consolidate and utilize one facility to dispatch calls, we'd more than likely only use one system," Robertson said. "Whichever one used the other would have to convert (their call history data) into the one that remains. That conversion fee is not cheap."

The city and county both use AT&T Hosted Solutions to route 911 calls to their PSAPs. The platform reduces transfers inherent to a county with two primary PSAPs, but Burrough told the board calls still occasionally get misdirected.

"Even with the triangulation, we still have issues now where I might be in the city and hit a tower in the county and talk to the county first," he said. "Those things are still going to happen."

Mahoney said the county and city plan to ask the 911 Board to retain their respective PSAPs.

"I think the city of Hot Springs and Garland County are both trying to put some numbers together to see what it would take to consolidate," he said. "We don't want to sacrifice service. We both have excellent dispatch centers right now. They do a fantastic job.

"This is probably going to be a long-term process to try to consolidate. I think we have the room over here to expand and accept all the dispatch people into our facility. That's something we'll work out with the city to see where we'll have the best service from. Our first option will be to go back to the 911 Board and submit a proposal to try and keep two here."