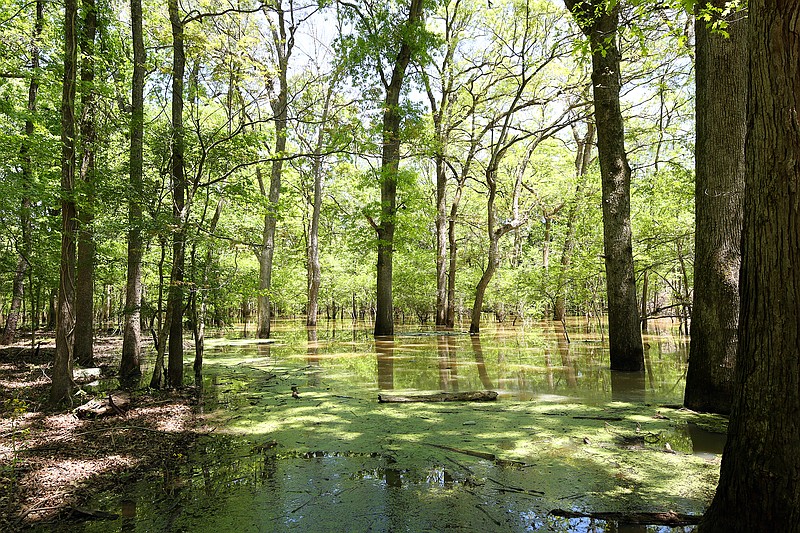 The Potlatch Conservation Education Center at Cook's Lake is situated in the Dale Bumpers National Wildlife Refuge and on the banks of a large oxbow. - Photo by Corbet Deary of The Sentinel-Record

I have a pretty good track record when it comes to recalling the general vicinity of destinations that I have written about throughout the years. In fact, I can still give the whereabouts of locations that I covered nearly 20 years ago.

However, there are those locations, that for some reason or another, have slipped my mind. It's not necessarily that I found them boring. Nor were they destinations that I suspected readers would not enjoy.

In fact, today's text is going to focus on one of such locations. I visited this particular spot probably 15 years ago while gathering information for an article I was writing about hummingbirds.

I was acutely aware that this facility was situated in the general vicinity of the White River National Wildlife Refuge. And I even embarked upon excursions with intentions of finding this destination. But I always came home empty-handed.

But that all changed when I recently decided to make a visit to the Potlatch Conservation Education Center at Crook's Lake. I didn't realize that my search of the location that had haunted me for several years was nearly over upon planning my trip. And although the route became faintly familiar as we neared, I still had no idea where we were headed.

But to say I suddenly felt a sense of accomplishment upon pulling into the parking area and recognizing the facility would practically prove an understatement. The quest was finally behind me.

As was before, our visit turned out to be extremely educational and enjoyable. But let's first talk about the facility's interesting history. Located at Cook's Lake, near Casscoe, the property was purchased, from various landowners, by the Lion Oil Company in 1947.

Of course, their intentions did not include drilling, as this section of the state is not known for producing oil. Instead, the company embarked upon the construction of a 4,800-square-foot structure that would primarily be utilized as a duck hunting lodge.

They maintained and used the property for three decades, when they sold it to Mark Townsend. The Stuttgart native only maintained ownership of the land for a short period and chose to sell it to Potlatch in 1971, with the understanding that he would retain hunting and fishing privileges for the remainder of his life.

Townsend passed away in 1997, giving Potlatch exclusive control of the property. The company sold 1,850 acres of Cook's Lake, a 2-mile-long oxbow, to the U.S. Fish and Wildlife Service in 1999. They also chose to donate 72 acres to the Arkansas Game and Fish Commission Foundation.

The acreage donated to the AGFC Foundation included the lodge, a residence, a shop, various other outbuildings and 65 acres of bottomland hardwood forest.

Their agreement's purpose was twofold. The property would be preserved for the education of present and future generations, as well as, to benefit native plants, fish and wildlife species.

The agencies' project has proved a success. In fact, the facility offers a number of programs throughout the seasons, some of which are designed to provide a classroom setting, both in and outdoors.

These particular courses cover a wide range of subject matter that is incorporated with the facility's native habitat. Participants might find themselves identifying macroinvertebrates that they collected from the environment, or they might be introduced to orienteering via a compass and GPS.

Students will likely enjoy learning about native animals via skeletal remains and pelts, and they might find enjoyment in learning interesting facts about mastodons and other extinct animals, such as the ivory-billed woodpecker.

The facility is also involved in providing other opportunities for youths as well. In fact, they provide activities where those who are in scouting programs can earn 15 different badges.

Speaking of deer hunting, the facility also participates in an annual deer hunt, specifically for the mobility impaired.

The fact that the facility is dedicated to providing a setting, where today's youths can grow acquainted with and acquire a passion for the outdoors is more than enough to deem the education center worthy of our support, But it is important to know that it is not essential to be a member of a school or scouting group to benefit from what they have to offer.

The facility also welcomes the general public. And although those of us who choose to visit might not be privy to participating in a classroom setting, the opportunity to learn still exists.

In fact, it just so happened that our most recent visit occurred during their annual hummingbird study. And I certainly left the facility far more educated about these beautiful creatures.

The kind lady at the education center was more than willing to share interesting facts and field our questions. We even had the opportunity to watch on as she caught, gathered data, banded, and released one of these tiny birds back to the wild.

But even if we had not visited during the hummingbird season, we would have easily remained occupied for a while, as various pelts and skulls of native wildlife are on display.

But our time at the learning center was only a portion of the experience. One could easily spend several hours at the lake's edge. Those who bring a fishing pole might try their hand casting into its murky waters from the fishing pier.

I have not spent much time fishing in this particular section of the state, but one would suspect that many of the species that we catch here in the Ouachitas would thrive in the Delta, as well.

One is apt to coax a largemouth into biting, and I am positive that bream would thrive in this habitat, as well. And as for catfish? I wouldn't think twice about soaking a night crawler or a chunk of chicken liver. And I wouldn't be surprised if one caught a species or two that do not thrive in our neck of the woods.

One might also suspect that photography buffs could spend their fair share of time at the water's edge, as well. I noticed several wading birds going about their everyday rituals during our recent visit. And this might prove a great location to set up during the annual migration periods, as well.

Although not an avid archer, I did enjoy checking out the 3D archery range. Various targets were placed throughout the trail, and would lend to a challenging and enjoyable outing for those who participate in the sport.

Yep, I was certainly glad to reacquaint myself with the Potlatch Conservation Education Center at Cook's Lake. And I'm pretty sure I'll return to this particular destination again in the near future.

To get to the facility from Hot Springs, take Highway 70 east to Interstate 30 and head east, toward Little Rock. Remain on I-30 for 27 miles and keep right on Interstate 440. Go 6.8 miles and take exit 7, onto Highway 165 toward Scott and England. 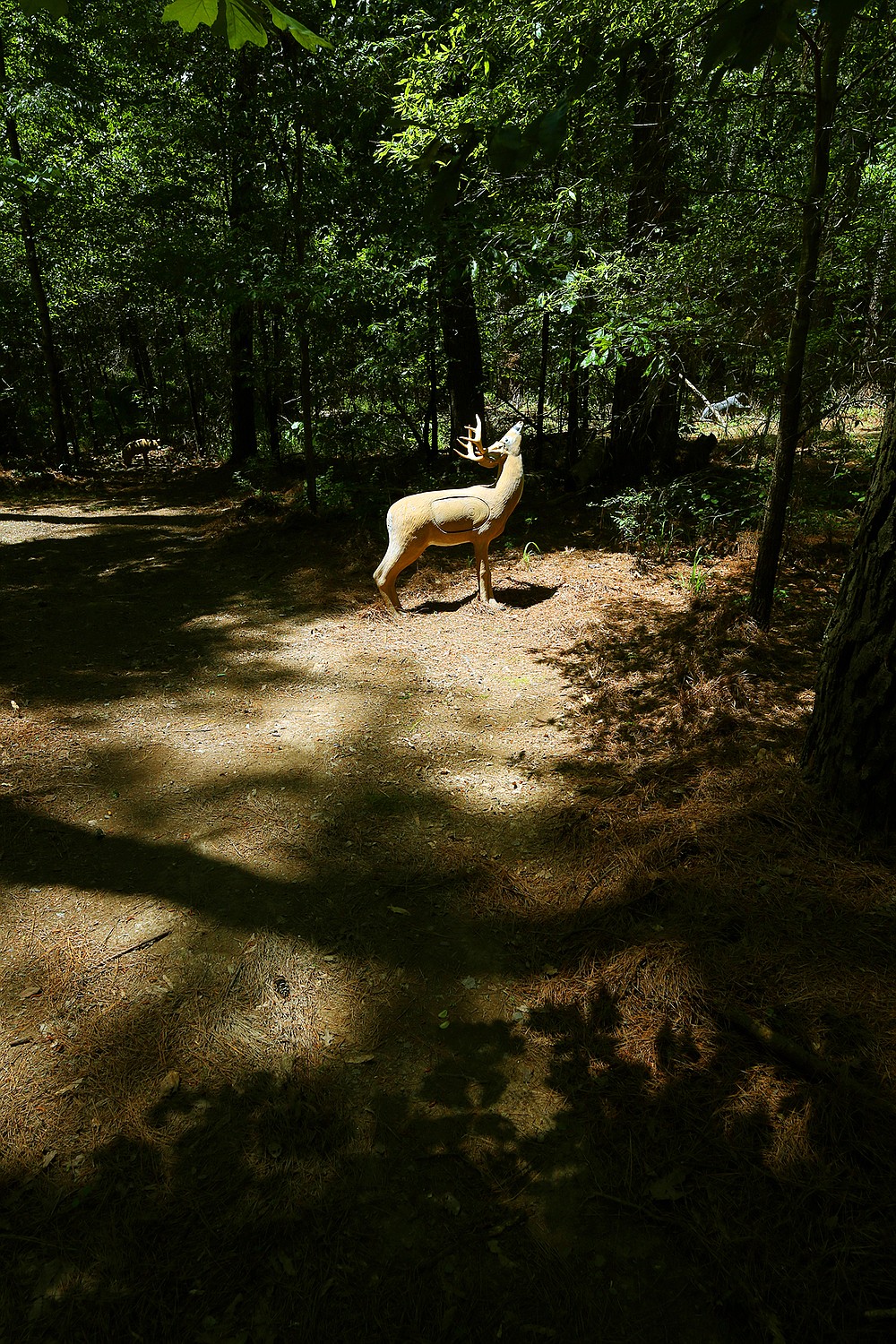 Those who enjoy shooting their bow might find the 3-D archery range at the Potlatch Conservation Education Center at Cook's Lake of interest. - Photo by Corbet Deary of The Sentinel-Record