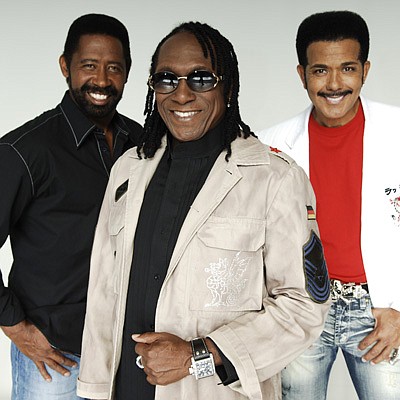 An undated handout photo of the Commodores. - Submitted photo

Oaklawn Racing Casino Resort's new event center will welcome the Commodores, "one of the most legendary Pop and Motown artists of all time," to the stage on Friday, Nov. 12, followed by country music legend Tanya Tucker on Friday, Dec. 18.

Tickets for the Commodores concert go on sale at 10 a.m. Friday and can be purchased at http://www.Oaklawn.com. Oaklawn Rewards members will be able to buy tickets on Wednesday and Thursday by using code COMMPC.

Tickets for the Tucker concert also go on sale at 10 a.m. Friday and can be purchased on Oaklawn's website. Oaklawn Rewards members will also be able to buy tickets on Wednesday and Thursday by using code TANYAPC.

"In 1968, the Commodores were formed while all the members were in college at Tuskeegee Institute. After being discovered by Berry Gordy, they went on to sell over 60 million records for Motown," according to a biography provided by Oaklawn.

Their hits "Machine Gun," "Brick House" and "Sail On." "For five decades, the Commodores have remained a force in the music industry," the bio said.

The Commodores' Walter "Clyde" Orange, James Dean "JD" Nicholas and William "WAK" King have "influenced both artists young and old and in all genres with their classic songs." The Grammy Award winners have sold a total of 75 million albums worldwide and produced seven No. 1 singles, five No. 1 albums, 20 Top 10 singles and 15 Top 10 albums.

"Since that auspicious beginning, she has become one of the most admired and influential artists in country music history, amassing 23 Top 40 albums and a stellar string of 56 Top 40 singles, 10 of which reached the No. 1 spot on the Billboard country charts," according to her bio.

Her songs include some of country music's biggest hits, such as "Soon," "Two Sparrows in a Hurricane," "It's a Little Too Late," "Trouble," "Texas (When I Die)," "If It Don't Come Easy" and "Strong Enough To Bend."

She has earned two CMAs, two ACMs and three CMT awards. In 2020, she received two GRAMMY Awards for Best Country Album: "While I'm Livin'" and Best Country Song: "Bring My Flowers Now." In fall 2020, Fantasy Records released "Tanya Tucker -- Live From The Troubadour," on the anniversary of her "historic, standing-room-only set from which it originates.

As someone who's been center stage for more than 50 years, Tanya is donating a portion of the proceeds from the sale of the album directly to The Troubadour."

Tickets to both shows must be purchased in advance and guests must show mobile bar code or ticket printouts at the door for entry. Doors will open at 6 p.m., showtime at 7 p.m.