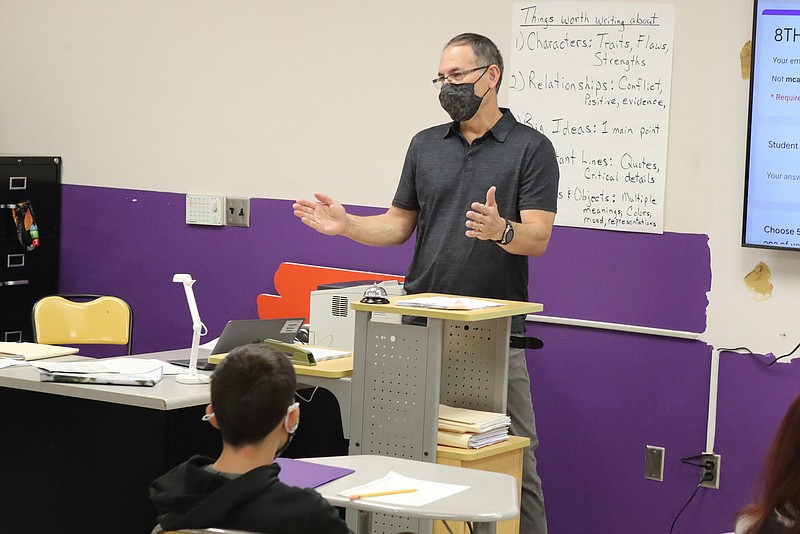 FOUNTAIN LAKE -- After a recent uptick in the number of positive cases of COVID-19 and students being quarantined, the Fountain Lake School District has implemented a mask mandate for students and staff on campus.

The new mask policy, which was approved unanimously during Tuesday night's school board meeting, went into effect immediately after the district saw 21 positive cases and 135 students quarantined. The mandate, which requires the wearing of masks while indoors or on school buses during normal school hours, will remain in effect until Oct. 11, at which point the board will revisit the issue to determine whether or not it needs to be extended.

Fountain Lake Superintendent Michael Murphy brought recent community/staff survey results before the board at the meeting, which showed 52.7% of the 866 surveyed in favor of a mask mandate and 47.3% opposed. He said Thursday that they began seeing an increase in positive cases once school started on Aug. 16.

"We came back to the board of education because we had 21 positive cases and over 130 students quarantined and we felt as though, by implementing a mask mandate, if both individuals are wearing a face covering and they're in close contact to a test-positive, it avoids them from having to quarantine unless they develop symptoms," he said Thursday.

"And so with the limited number of individual students who have received vaccines, it really gave us another method to keep kids in school. ... And so they did vote after about an hour and 45 minutes of deliberation. They did vote 5-0 to implement a mask mandate that really focuses on our school buses and our classrooms. Any time that a child is outside, it's their discretion. So it's really, 'Can we socially distance in a classroom?'"

"There was a lot of sincerity among the community," he said. "And also our board of education really wrestled with this because they wanted to allow the autonomy of individual choice but understanding full well that the board of education's ultimate goal is to do the very best job that they can to educate the children within the school setting. ... The biggest thing there is we have a lot of our kids returning for on-site instruction this year," Murphy said.

"You know, the only time we're providing any element of virtual services is in the event that they have to pivot and stay at home for a period of seven to 10 to 14 days, depending upon their individual situation related to the quarantine."

According to the policy, students may remove their masks while indoors if they are actively engaged in athletic or music practices. During athletic events, including even those indoors such as volleyball games, masks will be recommended but not required.

"Part of the rationale behind that, one, is those are events you can choose to attend or not attend based on your own health conditions," Murphy said. "The other thing that we're trying to wrestle with, because of -- you're participating with other communities and some of those have a mask mandate (and) some of them do not, as public entities. So really our focus is within the instructional day only. And so, anything outside of that basically 8 to 3:30 (p.m.) time frame is going to be at the discretion of the individual whether they want to wear a face covering or not. And that's a volleyball game, outside football game, etc."

Murphy emphasized that the mandate focuses mainly on the instructional school day and gives people freedom as to whether they mask up or not when outside. The policy also states that there are exemptions to the mask mandate -- for medical, religious or other reasons -- which will be addressed at the building level. Murphy noted too that social distance availability can play a role.

"If we got a classroom of seven kids in it and the teacher can have proximity and students can have social distance between them, we can still remove those face coverings," he said. "But indoors in the hallways when we're moving, you know. ... When we're outside, it's not in effect; it's not in effect for activities when students are truly participating in an activity. There was a degree of concern for the ability to breathe air, so it doesn't involve those types of activities either."

There was discussion at Tuesday night's meeting about compliance requirements with the Arkansas Department of Health regarding quarantine guidelines. Murphy said that working in conjunction with ADH and the Arkansas Department of Elementary and Secondary Education, the district is required to have a point of contact for COVID-19 and conduct contact tracing. He noted that while there was a request among the community to forego contact tracing, the district doesn't have the option.

"That question was asked by audience members, parents, and it was also asked by members of the board of education," he said. "And so (we) had to go back and reference a communication memo from the department of elementary and secondary education on the COVID-19 learning plan for the year and it does require us to have a point of contact and it does require us to coordinate contact tracing in regulation with the department of health guidelines. And so we've been continuing to follow those quarantine guidelines -- identifying probable close contacts in the event that we have a test positive in the educational setting. ... Probably the greatest challenge we have with the community is educating them on, one -- the rationale and protocols for close contacts, and the quarantine guidelines, because, you know, there's more variables there this year than what there was during the original inception of the rules and regulations we put in place to open schools last year."