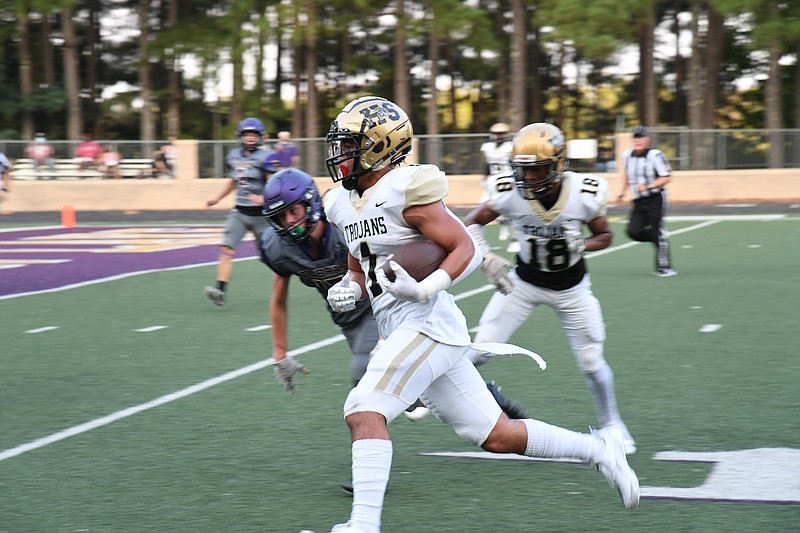 Hot Springs' Pierce Smalley (1) makes his way into the end zone to score a touchdown against Fountain Lake Thursday at Allen Tillery Field. The Trojans won 52-7. - Photo by Tanner Newton of The Sentinel-Record

FOUNTAIN LAKE -- Hot Springs may have won the game, but it was not pretty.

The Trojans (1-0) finished with 19 penalties in their 52-7 rout of Fountain Lake Thursday night in the Garland County Kickoff Classic at Allen Tillery Field.

On a night that saw the Trojans tally 531 yards and score eight touchdowns, they were also hamstrung by 172 yards of penalties, despite taking a 20-0 start to the game with a 26-7 lead at the break.

Fountain Lake (0-1) lost most of their running backs in the first half, and with just 21 players suiting up for the rivalry game, the Cobras could not afford to lose the majority of their offensive players.

The Cobras, who were unable to field enough players for the contest a year ago due to the coronavirus, saw two players quarantined this week, leaving them unavailable for the game. Add to that the low numbers on the team and players who are unavailable due to injuries, Fountain Lake was gasping for air going into the matchup.

Perry Jones led the Trojan ground assault with two touchdowns on nine carries for 83 yards, but Johnathon Walker put the final nail in the coffin as he broke free for a 78-yard run for the end zone, finishing with just 83 yards on the night. Quarterback Isaac Shelor was 14 for 26 for 240 yards and two scores, both to T.J. Brogdon who finished with seven catches for 164 yards, including a 47-yard TD catch. Shelor was picked off once

Kadin Hilton picked up the only points for the Cobras, a 43-yard reception from quarterback Wesley Campbell. Hilton had three catches for 56 yards, and Campbell was 4 for 26 for 60 yards with three interceptions.

Steven DeArmon had eight rushes for the Cobras for 40 yards.