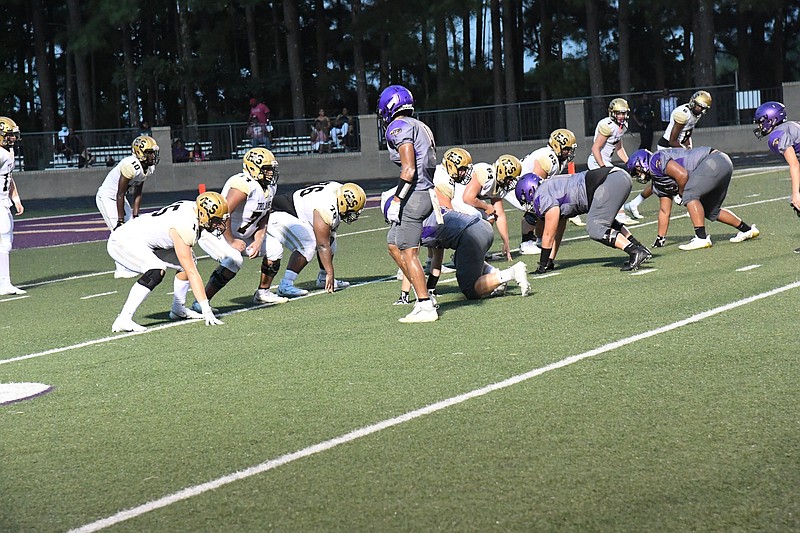 Hot Springs and Fountain Lake players line up at the line of scrimmage. - Photo by Tanner Newton of The Sentinel-Record

FOUNTAIN LAKE -- Thursday night's contest between Hot Springs and Fountain Lake could be summed up with several one-word descriptions.

But the single word that tends to fit the bill best is: penalties.

Hot Springs was penalized 19 times for 172 yards while Fountain Lake had nine calls against them for 132 yards. The Cobras were penalized nearly twice their total offensive output.

That does not take into account the five (officially counted) fumbles all but two recovered by the Trojans with four fumbles committed by the Cobras.

"It was bad football," he said. "One hundred twenty-three yards, I think, worth of penalties in the first half. No telling what we had the second half. You ain't gonna win the game -- the tough ones -- like that. You won't beat anyone like that in the 5A-South."

With just 21 players dressing out for the Cobras, head coach Kenny Shelton knew that any injuries could create waves that could affect the team throughout the season, which is why his coaching staff cross-trained most of their players in the event that someone was injured.

"Coming into this year, you know, we knew depth was gonna be an issue," he said. "You know, we've got 27 on the roster. ... Coming into (Thursday night), I had four guys that were injured. Lost two to being quarantined, so we dressed 21 tonight. And, unfortunately, you know, we had several injuries -- dome minor, some severe. And, you know, I don't care how good you are when you lose every running back you've got in the first quarter and a half, it makes things a little difficult."

Despite losing several players, the team never gave up their willingness to fight.

"At one point I had a defensive lineman having to play defensive back," Shelton continued. "You know, we had guys that were playing out of position, but you know what, every time we asked a kid to go somewhere, 'Coach, where do I line up? What do I do?'"

Leading 26-7 at the half, the Trojans continued to press offensively, scoring three more times in the third frame, including on a blocked punt that was recovered in the end zone. Johnathon Walker, an ASMSA student who plays for the Trojans as part of a longstanding agreement between the schools, put the final nail in the coffin as he broke free on a 78-yard run to the end zone.

"We've got some athletes, just got to get them the ball," Burnett said. "You know, just like their 78-yard banger -- we call him Watson Chapel -- by Jonathon Walker, one of our Math and Science kids. You know, Pierce Smalley did good, Akeem Dorsey, Perry Jones. You know, like I was telling you, all them running backs, they got all their touches tonight."

Shelton said that while the loss of the game and the players was painful, he knows that the team will be back as the season progresses.

"These kids have been through a lot these last few years, and you know I have no doubt that come the end of the year, it's going to be a much brighter spot than where we are now," he said. "And I know it's really hard for teenagers to see that, and it's hard for for us old guys to see that, too, but we've been around the block a few times. But I have no doubt these young men that I've known -- You know, I've been a part of these, especially the seniors, I've been a part of their lives for 11 or 12 years and got to see him grow into fine young men and good athletes. And, you know, I hurt more for them, but we're gonna be back."

The Cobras will travel to England next Friday, and the Trojans will host Arkadelphia.