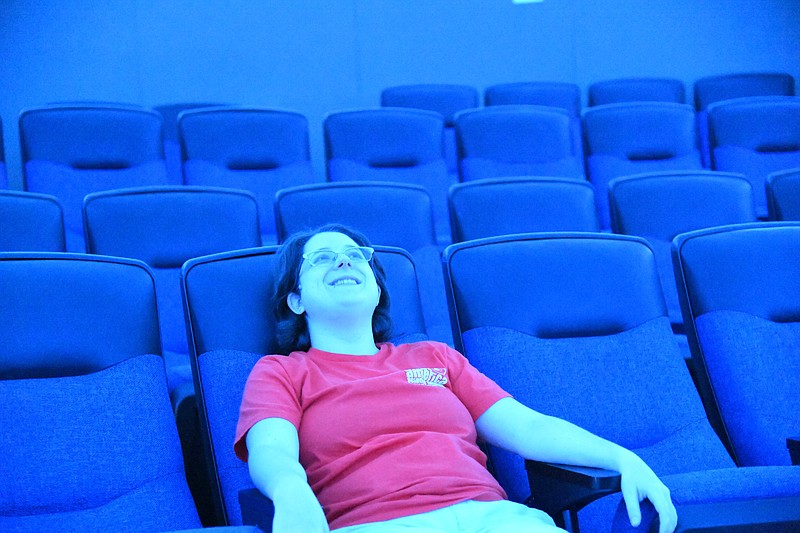 Casey Wylie, director of education at Mid-America Science Museum, sits in the Dome Theater, which will reopen in September with an updated projector system. - Photo by Tanner Newton of The Sentinel-Record

After being closed for over a year, the Oaklawn Foundation Digital Dome Theater will reopen to the public at the Mid-America Science Museum on Sept. 11 with an upgraded projector system.

The theater opened in 2015 when the museum was renovated. Casey Wylie, director of education at the museum, said the upgrade was possible due to a grant from the theater's sponsor.

"This dome has been very graciously sponsored by The Oaklawn Foundation, for which we are very, very grateful, and we are just over the moon excited that they were able to sponsor an upgrade to our system," Wylie said.

"We have switched to Digistar 7, that is the latest model, we are one of the first who gets to have Digistar 7, which is awesome," Wylie said.

Wylie said the theater was a hit for the museum, but the COVID-19 pandemic forced them to close it.

"Unfortunately we haven't had it open during all the COVID, just because it was such a confined space, and then we were unable to reopen it when we reopened everything else because the system that we did have, that company ended up going bankrupt, the Sky-Scan company, so we put everything on hold. We didn't want to stress out our overdue lamps and projectors too much, we just sort of waited, and thankfully The Oaklawn Foundation came in and saved the day," she said.

"So this new version will be an upgrade for several reasons. One, it's going to be in higher resolution. I mean just the fact that we went from 2015 technology to 2021 technology, as you've seen with every type of technology, it really is a huge advancement," Wylie said.

"It's going to be much clearer, which will make the surround vision experience much more lifelike," she said.

"Our new projectors ... are digital laser-based instead of being lamp-based, like a traditional projector, which will cut down on cost amazingly because we don't have to change out the lamps all the time now," she said.

They will be working with Evans & Sutherland on the project which will make it easier for the theater to show a varied selection of programs, Wylie said.

"They are sending us a list of programs. I think we have seven titles that we can choose from that we're going to be switching out pretty regularly," she said.

"While this will always be space predominantly since we don't have a lot of planetariums in Arkansas, that's something that we're very excited to be able to provide, but the Evans & Sutherland Digistar System also offers access to pretty much every science imaginable," Wylie said.

"We can basically turn it into a giant Google Earth with even more detail," she said.

"The whole cool thing is once the lights go down and the screen goes up, you feel like you're moving. It's very much a 3D experience. The chairs don't actually move but when the Earth is rotating, you feel like you are rotating. With the new shows, we'll be able to zoom out, zoom in. It's like the best IMAX you've ever been in, only all around you," she said.

"It's pretty much like Circle-Vision at Disneyworld, only you get to sit down, and it has a ceiling too, which is really, really fun," Wylie said.

In addition to the new equipment, Wylie said "we get the opportunity also, thanks to The Oaklawn Foundation, two of our educators are going to be attending the Digistar Users Group International Conference, which this year is going to be held in Salt Lake City, to receive four days of astronomy training.

"It really allows us to do a lot with very, very little. We are one of the smallest institutions that has (a dome theater). Not just small in size but small in number. It's very unusual for a museum of our size and capacity to have something like this. It's very unique and a fantastic opportunity," she said.