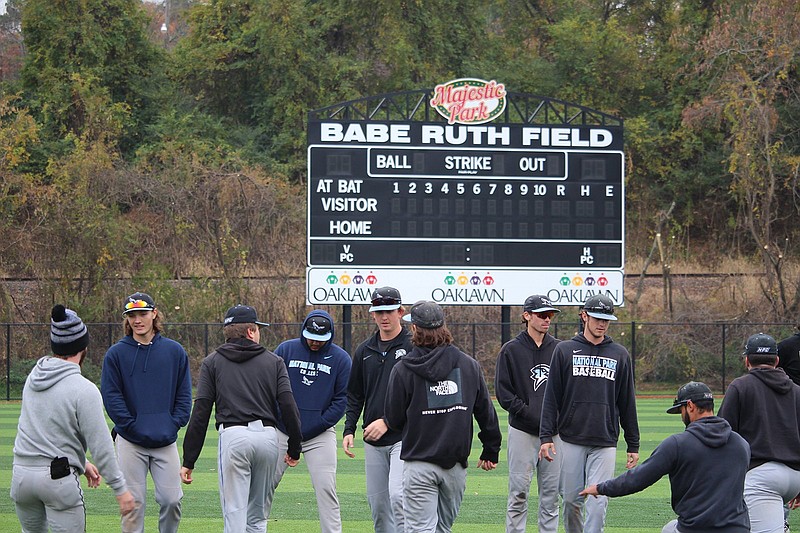 The National Park College baseball team warms up before its first ever practice on Majestic Park's Babe Ruth Field Wednesday morning. - Photo by Krishnan Collins of The Sentinel-Record

Starting a new era of baseball in a city rich with the sport's history, National Park College became the first team to practice at Majestic Park, on Babe Ruth Field, Wednesday morning.

Moving forward, both National Park and Champion Christian will play their home baseball games at the new complex.

While it was not always necessarily part of the plan for National Park to play its home games at Majestic Park, Nighthawk head coach Rich Thompson and Visit Hot Springs CEO Steve Arrison had talked about the possibility for years.

"In the cards it was always like, 'What if we could have the colleges play here?'" Thompson said. "I spoke to Steve three years ago about this. I've been on that board since the beginning and it's always been on the cards of, 'How do we make this the center of baseball in town?'"

Thompson joined the Majestic Park project before he became a coach at National Park, and practicing at the complex for the first time marked a big moment for him, his players and the community as a whole.

"It's really exciting," Thompson said. "This has been a long time coming for me being part of the project for such a long time. This is kind of the start of big-time baseball in Hot Springs I think. We didn't really have anywhere to play on a grand scale as a community. Now we do. That's huge for not just our boys but for the youth population, my son, all his friends. Everybody now has a place to play in town."

Arrison said Majestic Park was built first for youth players in Hot Springs, but being able to have colleges and tournament play on the weekends was always going to be a big draw to the complex.

Minor league teams have also expressed an interest in playing at Majestic Park, and Arrison wants to get a beer and wine permit for the complex to sell those drinks when those types of teams come to town.

The Hot Springs Advertising and Promotion Commission applied for the permit last week. The permit is for special events, including weddings, reunions and convention receptions, and for potential sales at Babe Ruth Field.

"There's a lot of club teams and teams and leagues that have started since Major League Baseball sort of realigned minor leagues that are inquiring about playing here and that's a big revenue source for them," Arrison said. "Other thing that I didn't anticipate is we have a lot of wedding receptions. Convention groups are very interested in using the park."

Arrison said there is some dead time between seasons where the park could make revenue to keep the complex at the right standards.

He also made it very clear beer and wine would not be sold during youth sporting events at the Majestic Park.

"We're not going to serve any beer or wine during any youth baseball or events at all," Arrison said. "That would be for if we have some pro teams play here. Some colleges allow that. That would be up to them if somebody rents the park. ... It's just something we need to have in our arsenal so we can use it. If you have a big convention of a thousand people coming to town, you're looking for a place to do an off-site party or get together, what a perfect place."

While Arrison said it was a great landmark day for National Park to practice on Babe Ruth Field Wednesday, the park has actually been behind schedule because of the supply chain.

The fields are still missing backstop nets, backstop padding and trash cans. Both the nets and padding for the backstop could arrive in the next two weeks. The playground for the complex was ordered months ago, and it is supposed to arrive next week.

"We've been hearing that every two weeks, every two weeks," Arrison said. "We're just at the mercy of what's going on in the world right now. I can think of a lot of things I'd rather do than build a baseball complex during a pandemic."

If a team wants to participate in any type of batting practice before the backstop netting arrives, the team will have to use a batting turtle.

"These have been ordered months and months ago," Arrison said. "We're just waiting on them. We can't play any games until we have backstop netting just for safety purposes."

Playing at Majestic Park is more than just playing on a brand-new, shiny field. The complex sits on the location where legends of the sport participated in spring training.

Thompson described playing at Majestic Park and its history as a "crazy thing." He also credited the work Mike Dugan did to get that history back out in the open.

"Ending up being a baseball player in a town with such a great baseball history it was almost a slam dunk I suppose for me," Thompson said. "Jackie Robinson played here. Babe Ruth played here. My boys now get to play on the same ground they did. Baseball's in a way a romantic sport. ... The history and the ability to say I played on the same field as Babe Ruth and Jackie Robinson is kind of special."

Playing at Majestic Park will also slightly change the way the actual game is played by National Park.

The team played at Hot Springs World Class High School last season, and since it was a smaller field, the Nighthawks led the country in home runs with 118. Kirkwood, the team with the second-most home runs, hit 99 last year.

Babe Ruth Field is 400 feet to center field, which might change the team's home run total, but the larger field also has its advantages.

"We did have some guys that could really hit but we also played on a field that's 350 feet to center field," Thompson said. "This gives us the ability to play on a full-sized field that is going to be a lot kinder to my pitchers also."

In the Nighthawks' first practice Wednesday morning, the team spent time getting familiar with the new dimensions of the park and how the field plays.

"The biggest thing is how playing on a small field we didn't have to do a lot of the outfield shifting and those kinds of things that'd we have to do on a bigger field," Thompson said.

Moving forward, Arrison said there have been talks to get the Arkansas Travelers to Majestic Park, and he emphasized what impact high-level baseball has on the complex and Hot Springs.

"It shows everybody out there that this is a nice facility; it's a quality facility," Arrison said. "The more things we can do here, it not only brings these kids in where young kids can come watch the college kids and the pros play, it also spreads the word that Hot Springs is a baseball community and we have a great baseball history. All that leads back to tourism and people coming and spending their money and on and on."