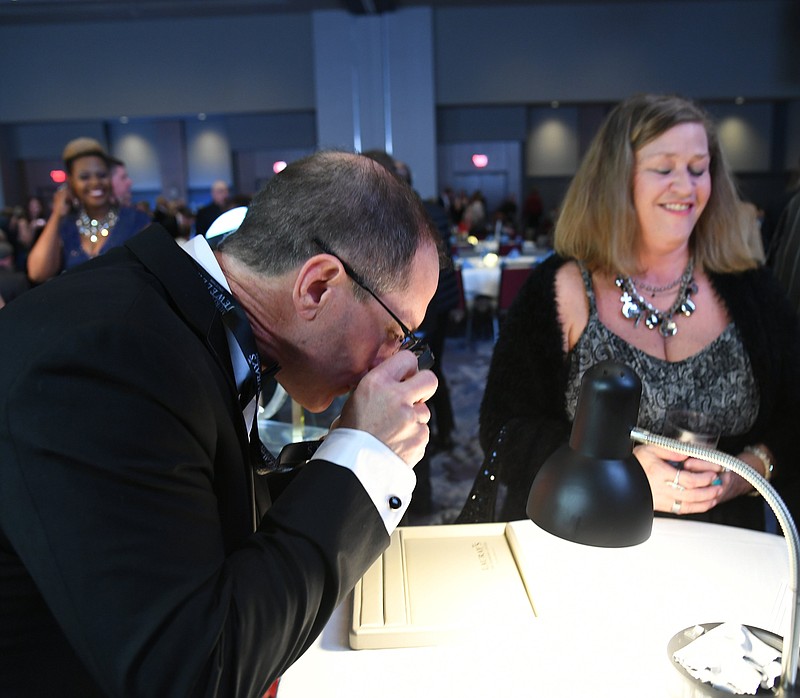 April Gilbert, right, starts to realize that her ice cube contained a diamond while Toddy Pitard, owner of Lauray’s — The Diamond Center examines the stone during Ice on Ice at Oaklawn Racing Casino Resort on Thursday. - Photo by Tanner Newton of The Sentinel-Record

Ice on Ice, an annual fundraiser for Project HOPE Food Bank, saw a record turnout this year with over 800 tickets purchased.

The yearly event is held by The Greater Hot Springs Chamber of Commerce with help from Lauray's -- The Diamond Center, Oaklawn Racing Casino Resort and 105.9 KLAZ. Attendees purchase signature drinks at the event for the chance to win diamonds frozen inside five of the drinks' ice cubes; the rest contain a cubic zirconia.

"It is exponentially bigger than what we have had in the past. We've had around 500 in the past," she said.

"I feel that the event went very well. We do not have our final numbers yet, because we did sell tickets at the door, but we are right around 800," Thompson said.

"I think that supersedes what we were aiming for. We were thinking maybe 650-700. We knew that we were going to be big, based on our annual banquet numbers and how popular this event is, we were excited to see the numbers grow," she said.

Toddy Pitard, owner of Lauray's, was also pleased with the increase in attendance.

The previous record, set in 2019, was 625. As far as last year's event, "naturally it wasn't near as big because COVID was in full speed," Pitard said.

Since they are still calculating how many people attended, Pitard said that they do not yet know how much money was raised.

"We don't yet, but a lot more than ever, and we do this for the Project HOPE Food Bank, and the extra money that was raised will continue to feed people that are less fortunate for longer, and that's why we do what we do," he said.

"Our nonprofits in Garland County do so much work, and they don't necessarily duplicate services, but they use each other frequently," Thompson said.

"Project HOPE Food Bank helps so many other nonprofits in and around Hot Springs that going to one that trickles down to other nonprofits makes so much sense. I know Mr. (Mark) Fleischner, who helped originate and found Ice on Ice, from Lauray's was very passionate about Project HOPE Food Bank, and that has been the go-to for quite some time at this point," she said.

"The pandemic did a number on all of our nonprofits. Feeding Hot Springs, making sure nobody has food insecurities, that's a really lofty goal and we just want to do our part to help out," Thompson said. She said they also did a peanut butter drive at the event, too.

"It's hard to sit at the table and have a great meal and be warm when you know that there's people out there who aren't eating and aren't in a warm environment and don't have a place to go, and I think I know by doing this, it makes me feel like I'm doing something to help, and it makes me feel better .... and you know a lot of people that are less fortunate, they didn't have a good up-bring. It wasn't their fault and we need to help people," Pitard said.

Pitard said that four of the five diamonds were found. The first one was found by April Gilbert of Jackson House. She said she attended because her boss invited her and she "wanted to do something fun." She added that finding a real diamond was indeed a fun experience.

"They were all excited," Pitard said about the four winners. "They were great people and had a great crowd," he said.

While the fifth diamond had not been found as of Friday, Pitard said "people come in for the next week that didn't get up to have their diamond checked, so hopefully one of those people will come in and we can identify it and they'll be the winner of a diamond."

This was the first time the event was held at Oaklawn's new event center. Both Thompson and Pitard praised the location.

"Oaklawn was an amazing facility," Thompson said. "Working with Oaklawn was fantastic. Their layout was great, we had plenty of space. We had enough room to kind of double what we were doing," she said.

"I know Wayne Smith (Oaklawn's general manager) and I know Oaklawn, and I knew if they partnered on this, that it was going to be first class and it was. They met, and even went over expectations," Pitard said.

Both Thompson and Pitard said they are looking forward to holding Ice on Ice again in 2022. 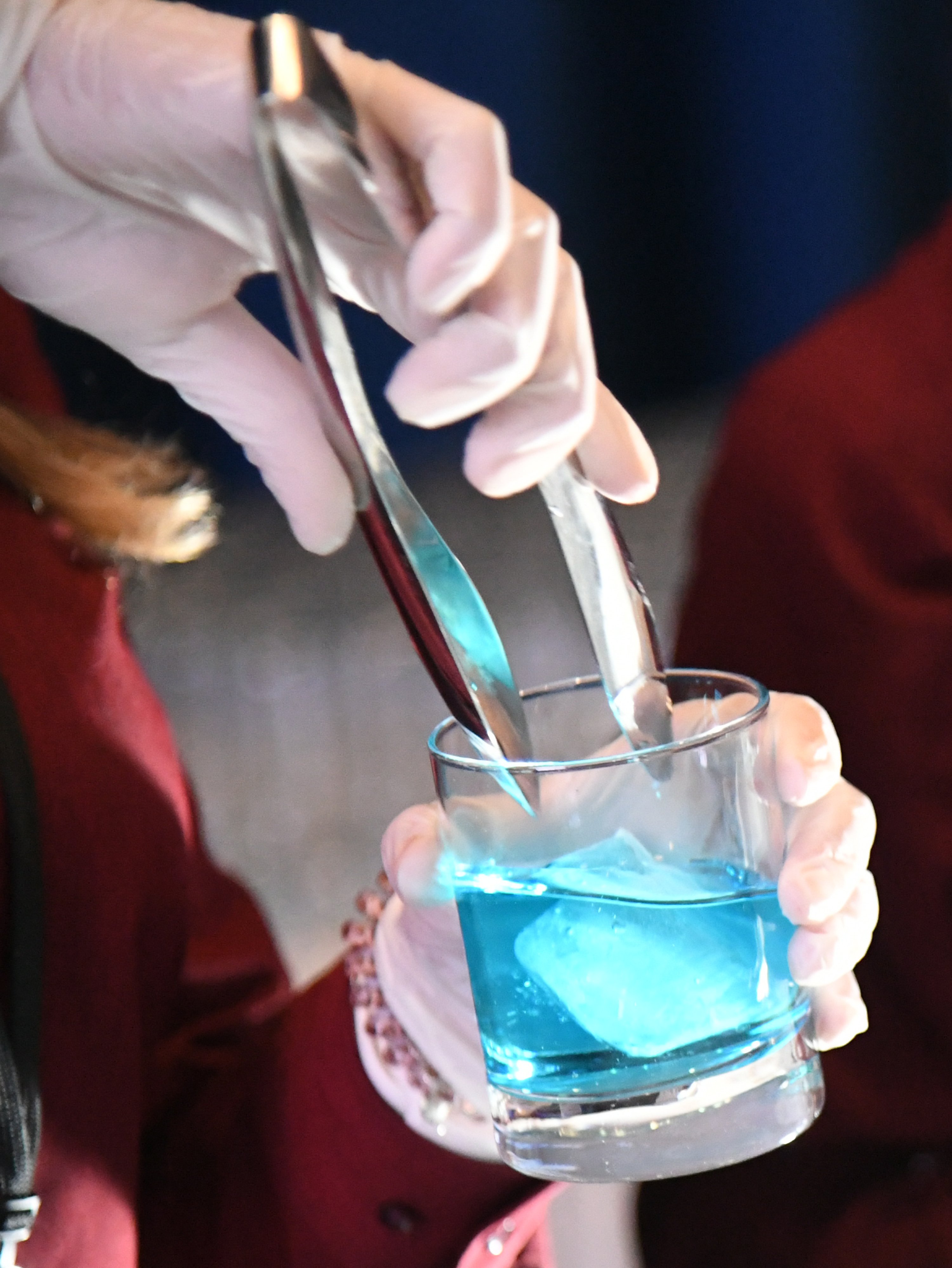 Workers at Ice on Ice drop ice cubes into drinks at Oaklawn Racing Casino Resort on Thursday. Diamonds were frozen in five ice cubes, while the rest contained cubic zirconias. - Photo by Tanner Newton of The Sentinel-Record