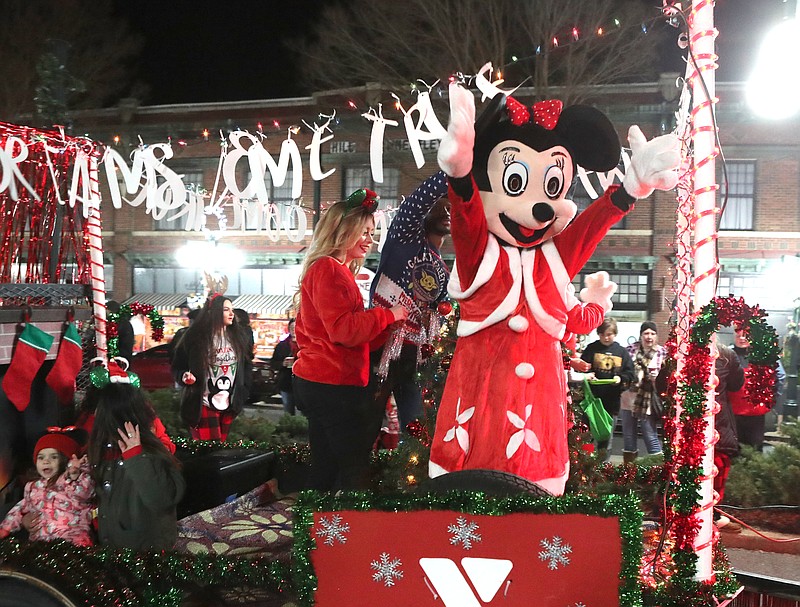 The Hot Springs Family YMCA’s float makes its way down Central Avenue during the 2021 Annual Christmas Parade hosted by Oaklawn Rotary on Monday. - Photo by Richard Rasmussen of The Sentinel-Record

After missing a year due to COVID-19, the Annual Christmas Parade hosted by Oaklawn Rotary Club returned Monday night to an "energetic" crowd in downtown Hot Springs.

"I think we had a great parade this year. Not only did we have some fantastic entries, floats, bands, dance groups, but I think the crowds were very energetic and I think they had a great time this year," Jason Harris, parade coordinator, said.

After missing last year's parade, they were excited to get to bring it back this year, he said.

"We hated the fact that we had to cancel last year, and so we started off this year, just back in the spring, really working hard towards getting to this, that way we could have it this year," Harris said.

"We had a total of 69 entries signed up for the parade," Harris said, including several bands, gymnastics groups and floats, which he called "about average."

In 2019, they had a record number of about 93 entries, he said, "but considering this was the first post-COVID parade, I was very happy with the turnout and registration. The crowd was very energetic, very loud, just having a great time."

On Tuesday, Harris and fellow Rotarian Lori Erickson handed out seven awards for the parade, themed "Holiday Traditions," at The Greater Hot Springs Chamber of Commerce.

The awards were as follows:

• Best Use of Theme went to "Traditions of Christmas Long Past" by Gates Family Entertainment.

• Best Use of Special Effects went to Riser Ford and Artbeat Entertainment.

"I'm glad to have it over with. I didn't envy the judges decisions on having to award those out, but I think they did a great job and I think they picked the right ones," Harris said. The judges were Rita Koller, Maxwell Blade, Antony Tidwell, Marcia Dobbs-Smith and Kathy Carter.

Leslie Paschal Barnes, CEO of Community Services Office, said she was humbled with the result.

"As you know, the parade is a long-standing tradition for Hot Springs, Arkansas, so we are part of the community and we wanted to highlight, this year, our STEAM initiative that we have with the office of Head Start. We have a program that highlights science, technology, engineering, arts and math, and we thought 'Sno Wonder' would be an awesome idea for the parade," Barnes said.

Carl Craig, who Barnes noted has been with CSO for almost 43 years, played Frosty the Snowman on their float. Craig said, "this was not our first time but it was by far the best."

Barnes said CSO's Head Start component did the work on the float and the planning, calling it "a collaborative effort."

"We basically entered this event to have fun and to build camaraderie with the employees and to engage our parents, so we're humbled by the win, but of course we are very, very, very pleased, and I'm proud of my team. I'm proud of the hard work they did," Barnes said.

Gates Family Entertainment, which won Best Use of Theme, is the company that puts on the Hot Springs Renaissance Faire, and their float had elements of the faire on it. Travis Gates, creator of the faire, said this is the second time they have won this category.

"It's actually a tradition of ours," he said, when asked why they entered the parade. "It's our last big hurrah in Hot Springs for us, for the year, so that is just the way we close out the year -- trying to make people merry and bright going down Central."

Emilie Boyett, a cast member with the faire, participated in the float, and played a fairy named Spruce. She said it took them two weeks to build their float, which on one end featured "a grandmother reading a story to two little children and as you saw the end of the float, it was a more natural-looking Christmas Tree with Fae elements and all the Fae helping the kids decorate the tree."

"All of our cast members really love interacting with the city and all of our local patrons, we always have fun, no matter what we are doing, I think you can get us together and we'll have fun doing it," Boyett said.

Gates said some of the kids in attendance recognized the cast on the float.

"I noticed that some had gone to the faire, because they were hollering our faire names out and so I was like 'That's awesome,'" Gates said.

"I wasn't like setting myself up to win anything. When Travis called me last night and said 'Guess what, we won something,' I legitimately started crying because I wasn't expecting it at all," Boyett said.

They are "looking forward to having the 2022 parade next year," Harris said.

Preregistration for next year's parade has already opened. Harris said entrants who register before the end of the year will pay $80, and those who wait until 2022 will pay $100. 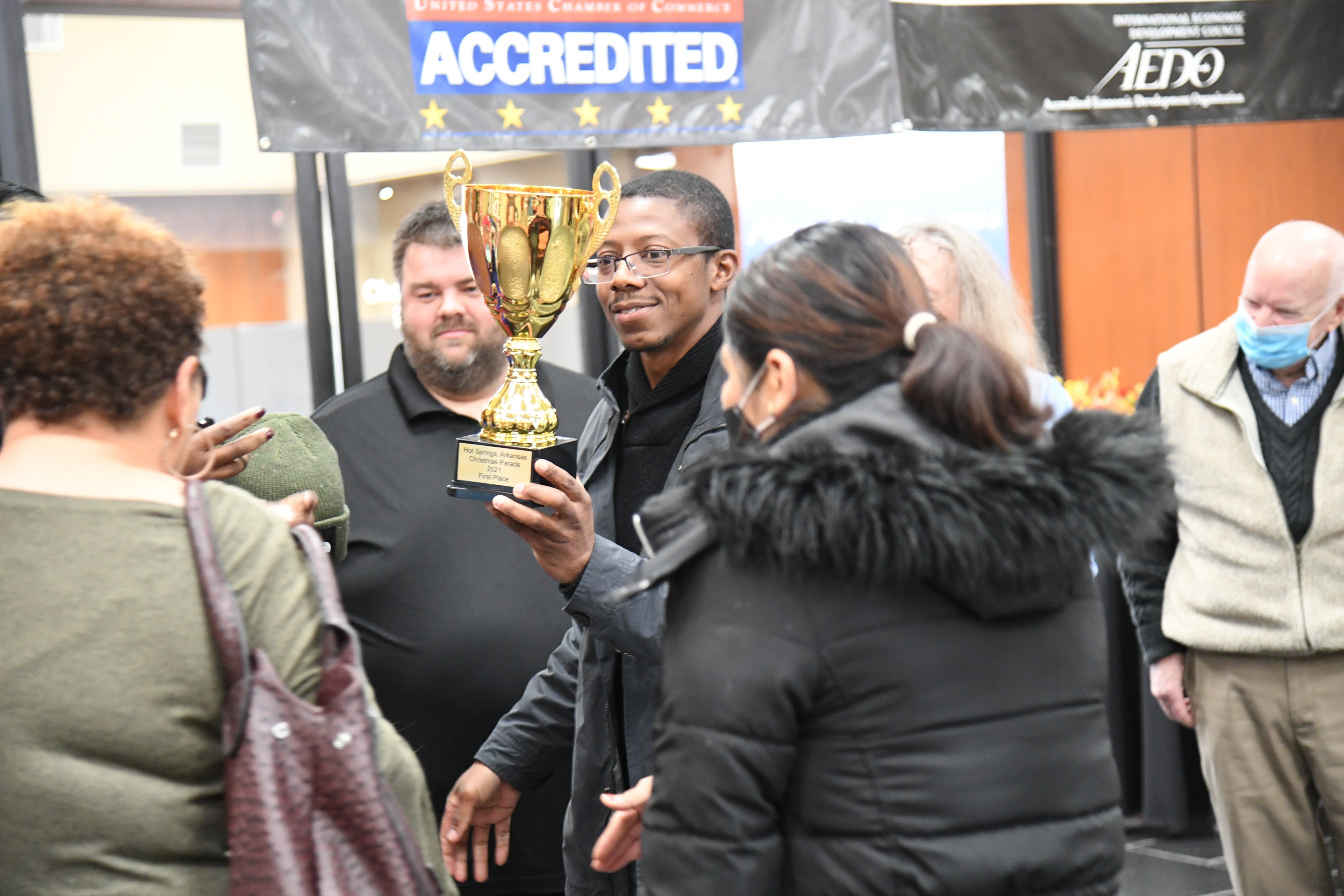 Community Services Office celebrates its first-place win for "Sno Wonder" Tuesday at The Greater Hot Springs Chamber of Commerce. - Photo by Tanner Newton of The Sentinel-Record