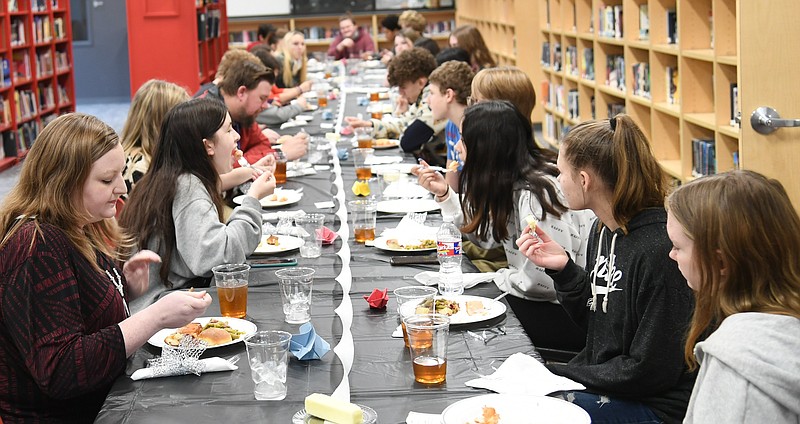 Breann Johnston, Cutter Morning Star High School world history teacher, front, left, sits with her students in the library for their "enlightened thinkers" party on Thursday. - Photo by Tanner Newton of The Sentinel-Record

Students at Cutter Morning Star High School were served an enlightening meal recently after learning about the Enlightenment Movement in their world history classes.

The students "planned a party about the Enlightenment Movement with different enlightenment thinkers, and they planned where everybody would sit based on having similar ideas and such, and we put together the theme that they came up with," their teacher, Breann Johnston, said.

"It took them about a week to plan it and it's been a couple of weeks since then that we've done a few details here and there, and they finished it off today," Johnston said, noting the students were "primarily 10th grade."

While Johnston's students planned the meal, it was cooked by the students of Madison Staton's family consumer science class. The meal included salmon, potatoes, green beans and rolls and cake.

The idea for the party, which was held at the library, originated with Heather Slay, media specialist/librarian, Johnston said.

"When I was telling (Slay) about the project, she said 'We can make that happen,'" Johnston said. "She kind of put the idea in my head, and we worked together, the three of us to try to put it together."

Slay said she felt the event was a success.

"So far so good. We had a little struggle with the ovens, truthfully, getting them to cook as fast as we thought they should, but other than that we pulled it off pretty well," she said, noting the students who cooked the meal "had a great time in the kitchen. It was amazing. The students did a great job."