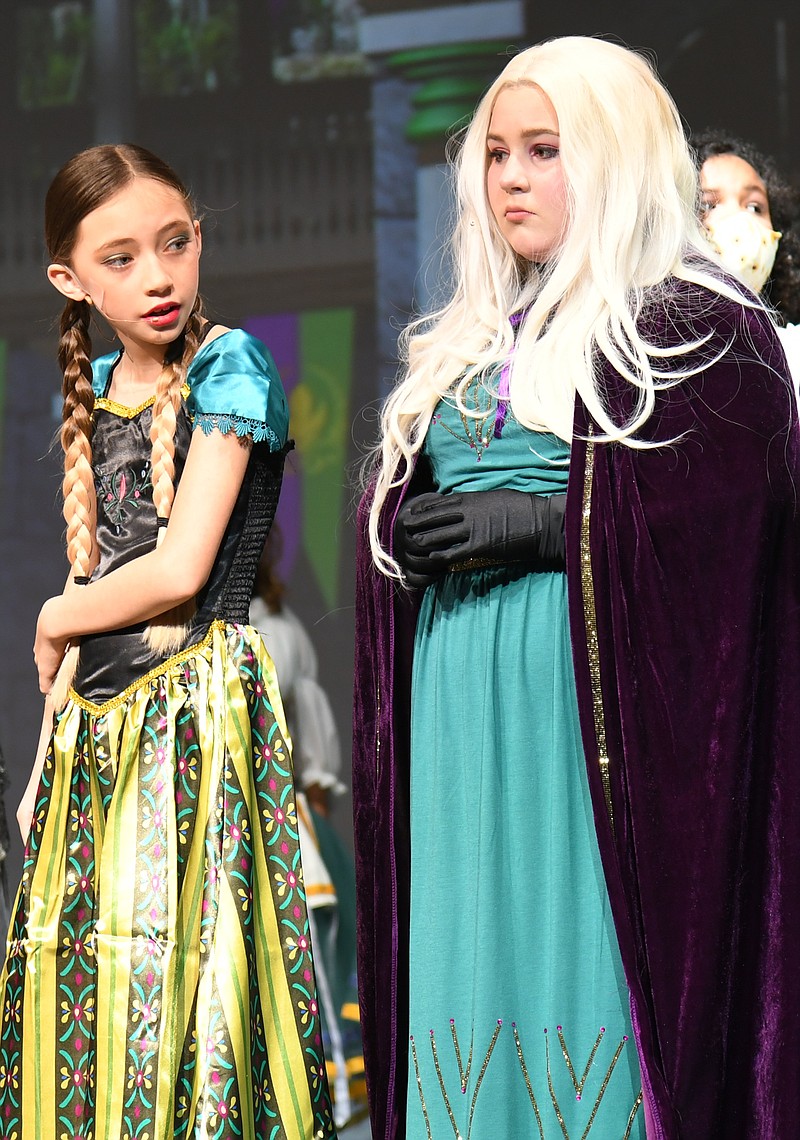 Rayleigh Rauda, as Anna, left, and Arabella Lampinen, as Elsa, rehearse for “Frozen,” a production by Main Street Visual and Performing Arts Magnet School. - Photo by Tanner Newton of The Sentinel-Record

Students at Main Street Visual and Performing Arts Magnet School are ready to "Let it go" this week with four performances of the stage version of Disney's "Frozen," a musical that a school official says carries a relevant message about unity.

The performances will take place at 9 a.m. and 6 p.m. Tuesday and Thursday at the school.

"Of course we love the music. It was the music," Kirchhoff said. "We were slightly afraid that it was overdone, but then we listened to the music and we were like 'Yeah, we gotta do it,' and with COVID and everything, it was just a crazy time -- and we also thought we were going to be letting go of the masks this year ... and then the masks came back, but that's OK."

Kirchhoff said the story follows Elsa, a girl with magic powers, who destroys her relationship with her sister, Anna, because of fear. "An act of true love can thaw a frozen heart and I believe that can apply to us right now and what we are going through right now, and how love can bring us back together to unite us," she said.

Katie Henson, dance teacher at the school, said they have been working toward this play since the start of the semester. "We started school mid-August and we distributed the audition material that first week of school."

While they have been working since August, Kirchhoff said, "We only have three rehearsals a week."

Henson said the main cast of the play features around 33 students with speaking roles, but many more will perform dances during the shows.

"So we have our main cast that learns choreography too along with the songs that they are singing and doing, but also one of the things that's really special about Main Street productions is that we do have our main cast and we have our 20 or so kids, depending on the year, with speaking and singing roles, but we also incorporate as many of our kids in the building as possible, and I think our building has around 600, and we give every kid who wants to be in it an opportunity to do so," Henson said. "We're probably close to 300 kids on the stage."

Kirchhoff said the students performing dances will be different between the Tuesday and Thursday shows. "Our main cast stays the same but our little class (dancers) rotate so we can get as many kids on there as possible," Henson said.

Kirchhoff said rotating parts allows all students "to get their feet wet in performing a little bit. That's how we kind of warm them up and then when they're fourth-, fifth- and sixth-graders, then they get to audition for a lead role."

The cast is led by Rayleigh Rauda as Anna and Arabella Lampinen as Elsa, along with Tony Doss as Olaf and Kinsley Hammock as Sven.

"I've never been in a main cast, so I wanted to just try it out for the first time, and it's been really fun," Lampinen said, noting she had previously performed in "Madagascar." That experience "was really fun, because I was in choir, and so I saw what main cast go to do, and it was really cool," she said.

Lampinen said learning her lines was "not too difficult, you just practice and memorize them." Kirchhoff noted Lampinen "was the first person off book of the entire cast. She makes it look easy."

Not only new to the main cast, but also new to the theater entirely is Doss.

"I've actually never been in a play, and I've always wanted to act," Doss said.

"He'd never been a performer, but when he came to audition, I tell you, we were all like, our jaws hit the floor. We were like 'He's Olaf,'" Kirchhoff said. "Everything, the total package. The eyes, the face, the voice, and I was just like, we were all so blown away, just smitten, and so he's just a natural."

"I'm the reindeer Sven," Hammock said. "I think it's really fun and I like the costume a lot."

Hammock previously performed in "Mary Poppins," "Cinderella" and "Madagascar." She said she keeps signing up to perform in plays "because it's really fun and I like meeting the new people in the play and getting to meet new people and act."

"She's a really talented performer," Kirchhoff said of Hammock. "All three of them are. Very naturally gifted."

"These are our triple threats, for sure," Henson said.

All four performances are open to the public and free to attend, Henson said, but "it would be harder to get seats" for the morning performances because the other students in the school will be there to watch. 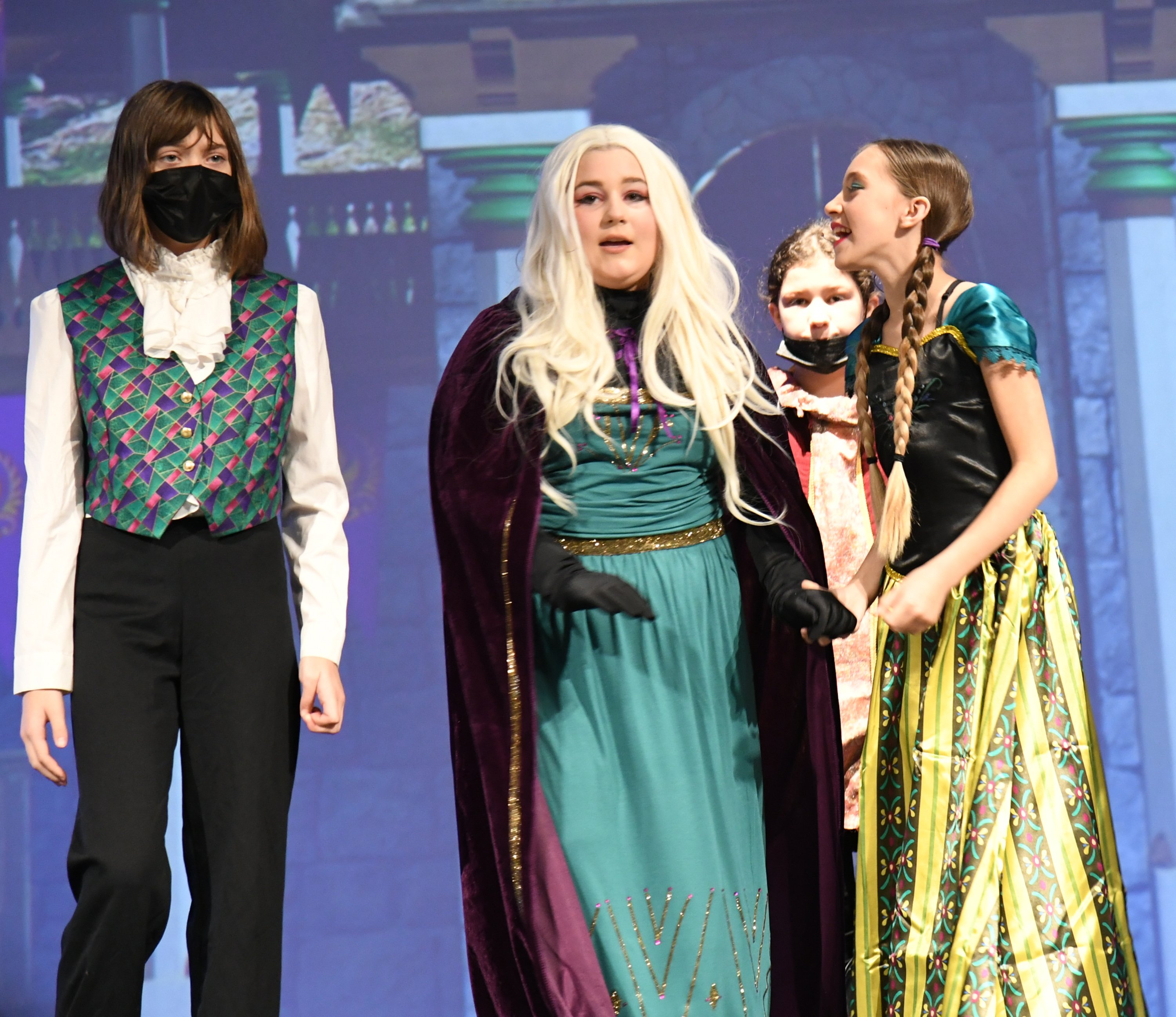 The cast of “Frozen,” including Arabella Lampinen as Elsa and Rayleigh Rauda as Anna, perform “For the First Time in Forever” during a dress rehearsal at Main Street Visual and Performing Arts Magnet School. - Photo by Tanner Newton of The Sentinel-Record 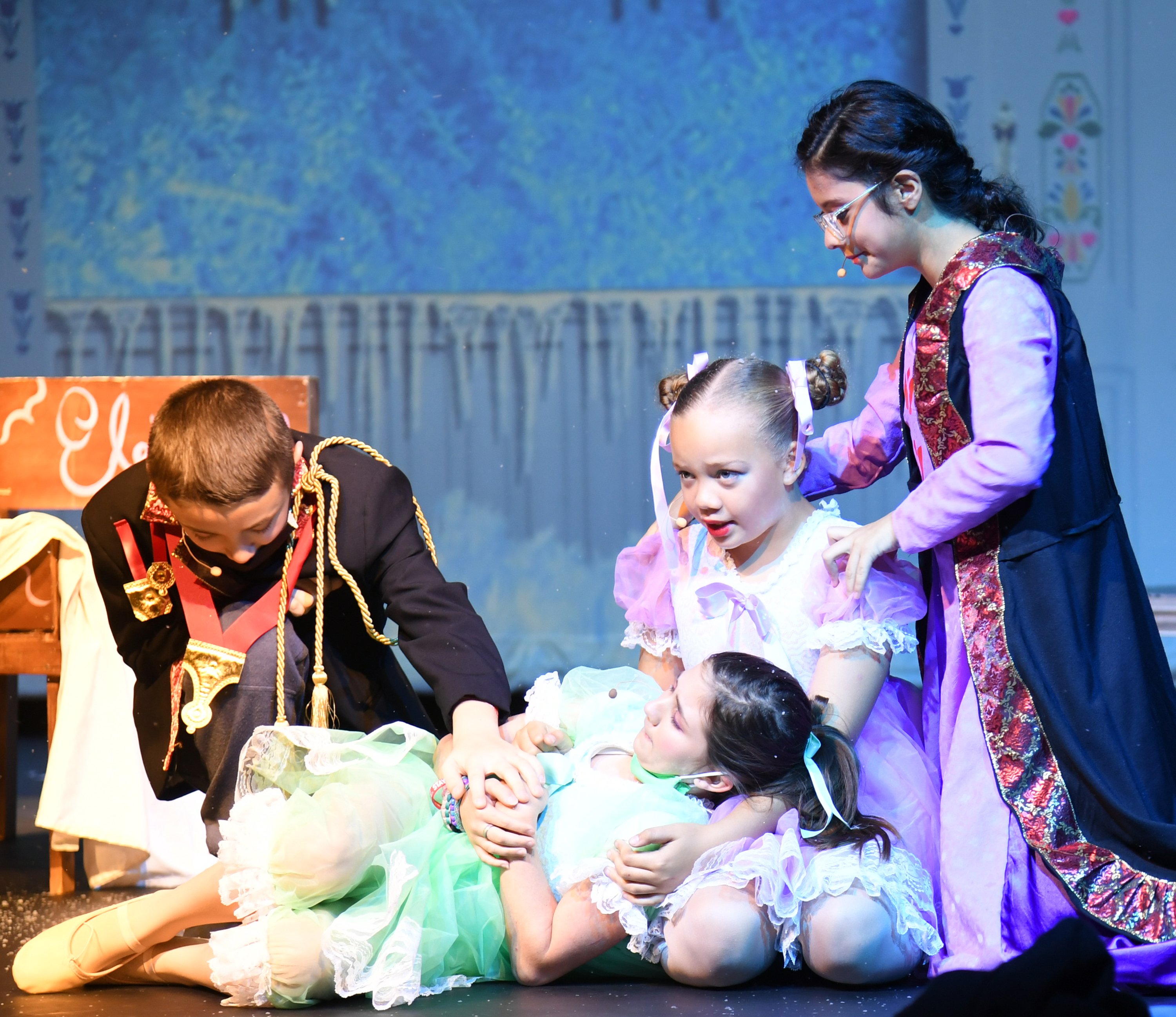 The cast of “Frozen” perform a scene where a young Elsa accidentally hurts her sister with her ice powers. - Photo by Tanner Newton of The Sentinel-Record