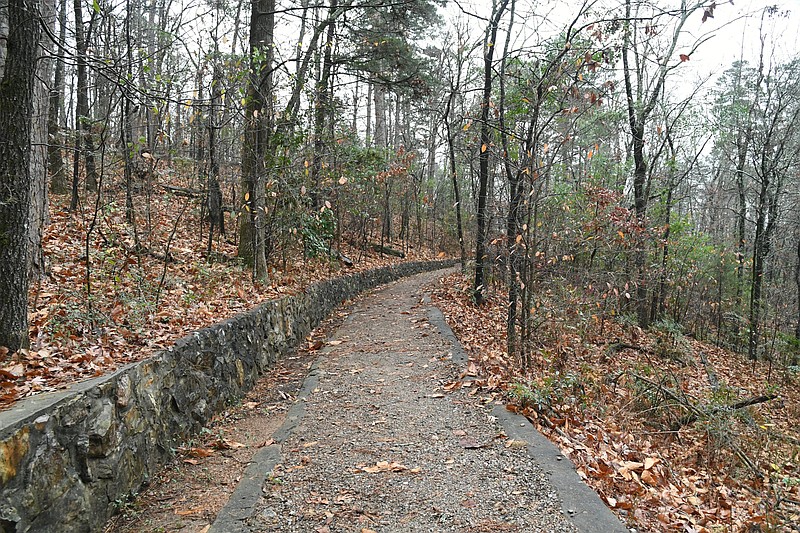 One of the trails in Hot Springs National Park as seen on Tuesday. - Photo by Tanner Newton of The Sentinel-Record

The 2021 Christmas Bird Count is set for Sunday and birders and other volunteers wishing to participate in the free event must register by Friday.

The bird count will be hosted by Hot Springs National Park, local chapters of the National Audubon Society, the city of Hot Springs and Lake Catherine State Park.

To sign up, call Nathan Charlton, HSNP natural resource program manager, who is coordinating the effort, at 501-620-6751 or email [email protected]

Charlton said the count will take place over a 15-mile diameter circle, and he is hoping for around 40 participants.

This will mark the 122nd year in a row that the National Audubon Society has held a Christmas Bird Count.

"This is the longest-running citizen science event in history, and it's important because it gives researchers, biologists, conservation biologists a chance to see differences in the number of birds, migration patterns, declines in populations, increases in populations, all of that," Charlton said.

"It's also just a fun way to get outside," he said, noting the count is "a worthwhile study."

Last year the count saw "about 40 participants, including some of our staff, a lot of the Audubon Society of Garland County and some other citizen scientists in the surrounding area," Charlton said.

"We counted 103 different species, and about 8,400 birds were counted last year, and the year before that we had 113 counted, with around 9,000 separate individuals."

As the COVID-19 pandemic is still ongoing, Charlton said they are encouraging participants to watch their bird feeders in their yards.

"Because of COVID, we're kind of shying away from getting too many people in the same car and grouping together, so we're really encouraging people to get out if you can, if you're comfortable with that, but also just to observe your feeder at home," he said.

"If you're new to birding, we can tag you with a more experienced birder," Charlton said, and for those who don't have the ability to identify the birds, "what we really encourage is if you have a camera -- your phone might work -- but if you have a camera, take a picture of the bird and then we can identify it later for you."

Charlton said the information collected from this count could be used in several ways.

"It gives us an idea, some vital information on the health, of how over 122 years now, of what birds we are seeing coming and going. If we are seeing big declines in populations of certain populations, or if we are seeing different birds coming in because of maybe climate change or urban development," he said.

"If we saw a population go from 100 count to zero, that would make us think about what's going on out there, what can we do different," Charlton said, noting the count can also help spot invasive species.

"We could document invasive species of birds that aren't normally native to Arkansas," he said.

People releasing pets "does happen here a lot. We're a very urban park. I won't go into to many details there, but we do have that happening here, a lot for different types of animals."