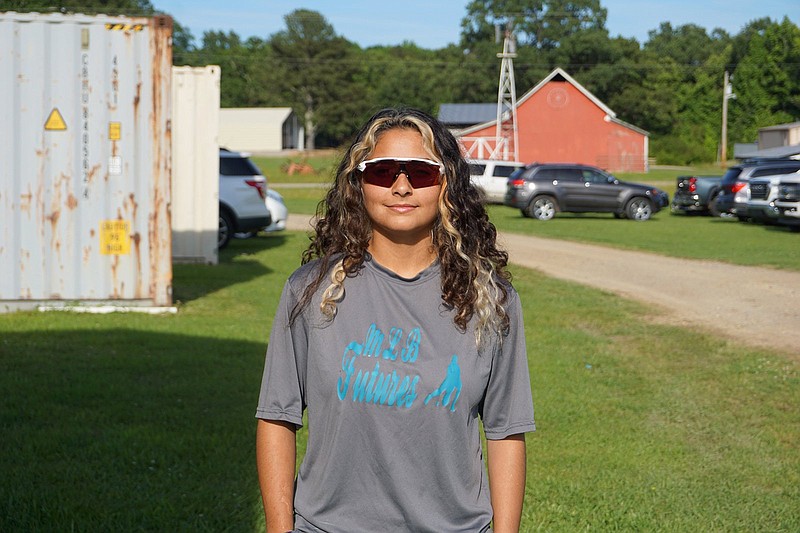 Jessieville catcher Violet Mendez was recently recognized as one of the top female baseball players in the country. - Photo by Krishnan Collins of The Sentinel-Record

Making the Jessieville boys baseball team was just the first step for Violet Mendez, and now she has continued to advance in her baseball journey recently with two more major milestones.

She was invited to the Girls Baseball Breakthrough Series at the Texas Ranger Youth Academy which was held in November. The event included 32 of the nation's best girls baseball players aged 14-17, and the athletes participated in drills both on and off the field.

The Jessieville catcher also received an invite from American Girls Baseball to participate in the All-American Women's Baseball Classic in January. Before she went down to Texas in November, she said was really excited when she got informed she would be going to the camp.

"Tiring," she laughed about the experience. "We worked a lot and being around a bunch of girls that are working toward the same goal as I am kind of helps me see that there is a chance. The coaches were very supportive. Everyone on the staff was supportive. It was a very great experience."

In terms of day-to-day activities as part of the breakthrough series, the players started the day early with breakfast before heading to the training complex.

Once at the complex, the players worked on hitting, fielding and other basics.

"I worked on catching mainly," Violet Mendez said. "Then we would have what they called classroom, which is go over things. We talked about our goals and things we learned. Then we would have a game around 4:30 (p.m.) after that."

Violet Mendez said she never really looked at the game of baseball or her goals in an academic perspective like the players did at the breakthrough series.

The exhibition games they played were held in the Rangers' former stadium, now known as Choctaw Stadium.

"It was big," she laughed. "To be on that field, it was surreal. It was like a dream come true. To walk out and just be in a dugout, be on the field, just it was amazing."

In her time at Dallas and with the AGB event on the horizon, Violet Mendez said she realized that she can make it as far as she wants in her baseball career.

"I really didn't (think this was possible)," she said. "I knew that as far as I could probably make it was probably high school. Growing up it's always usually, 'Oh you can only play park.' Then as I got older I forced it to play middle school. Then when I got older again I forced it to play high school. And then I just kept trying and trying, and these opportunities popped up."

Although Violet Mendez has exceeded her own expectations in her baseball career, her father Orlando Mendez is still conflicted about whether he wants his daughter to play baseball or softball.

"She continues succeeding in what she wants," he said. "I've wanted her to change over to softball already. Every year I say, 'You've got the most you're going to get out of baseball,' then something else comes through. Which doesn't make me upset, but I'm in that turmoil. I want a college scholarship, but if you're one of the top, you've got to keep doing it."

The All-American Women's Baseball Classic will be held at the Baltimore Orioles' Ed Smith Stadium in Sarasota, Florida.

The event plans to bring together the nation's top 60 women's baseball players and have them compete in seven games across four days. The goal of AGB is to ultimately create a new professional's women's baseball league.

The classic is the first step in paving the way for that new league, and Violet Mendez said she is looking forward to a lot about the event.

"Just to go there and show that I can play," she said. "Make myself known so I can be seen and get better opportunities and whatever comes after that."

Orlando Mendez commented on how a professional women's baseball league is possible, but he is still conflicted about his daughter playing softball.

"A group of elite ball players might bring interest to another league," he said. "They call it a League of Their Own, where they would have a future to play and not be forced to play softball. Although, softball is awesome. I don't see how anybody can hit a ball 45-feet away coming that fast, but those girls are so talented. If you've spent your whole life on a baseball field, you'd want to continue that way."

It means a lot to Violet Mendez that she is part of a generation trying to start a professional women's baseball league.

"It's like there could be a possibility that this wouldn't even be a chance for most girls, and for us to have this opportunity is just a very great chance for us to prove that we can play and be on the same ballfield as boys," she said.

The classic will feature four different teams, and Mendez will find out which team she is on when she gets to Florida.

Orlando Mendez saw some things happen on the field while in Texas that really changed his perspective.

"What I saw out there made my jaw drop and told me to shut up about what Violet wants to play because it's her dream," he said. "I was blown away by the athletes that there are, and I can imagine now seeing 60 all together, it's going to be really exciting."

Violet Mendez worked at playing baseball her entire life, and now she has been recognized as a top girls baseball player in the country.

"Grateful and very happy," she said. "I worked my whole life and didn't think I could get there and didn't even think that was a possibility. So finding out that I could be one of the top just makes it unreal."

With all the progress Violet Mendez has made, Orlando Mendez finds the situation even more perplexing.

He saw a girl hit a home run inside Choctaw Stadium, and he saw his daughter hit a ball almost 370 feet on one bounce to the center field fence.