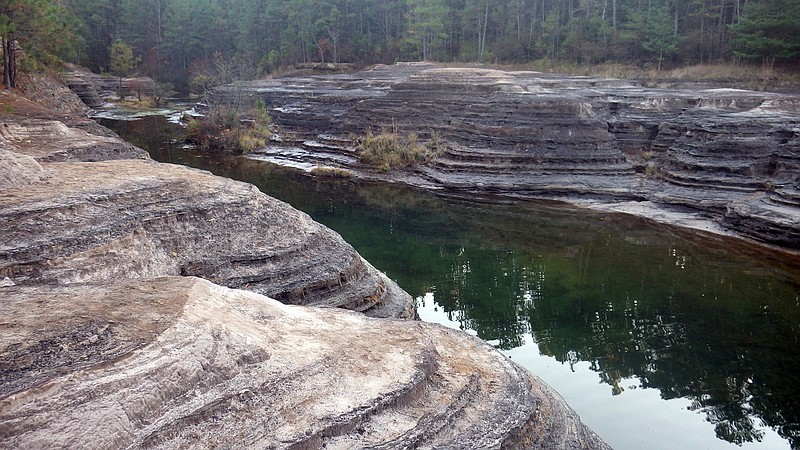 Located just below the White Oak Lake spillway, the Little Grand Canyon lends to a scene that is far from the norm throughout southwest Arkansas. - The Sentinel-Record/Corbet Deary

Outdoor writer and photographer Corbet Deary is featured regularly in The Sentinel-Record. Today, Deary takes readers on a journey to Little Grand Canyon.

I automatically draw a mental picture of bottomlands and rolling hills consisting of sand silt and clay when Arkansas' West Gulf Coastal Plain region is mentioned. I imagine hardwoods towering from the low-lying areas and yields of loblolly pines taking root in the dryer terrain.

However, I can think of one location that one might consider as somewhat of an anomaly. In fact, I'll step out on a limb and suggest that this particular spot is far from the norm throughout the entire state.

Located near the small southwestern town of Bluff City, the Little Grand Canyon is a location where I have returned several times since learning of its whereabouts. Situated below the spillway of the White Oak Lake, this would prove yet another potential destination for those who choose to visit the White Oak Lake State Park, which was featured in last week's article.

The Little Grand Canyon is located in the neighborhood of an hour-and-a-half from our neck of the woods. In turn, this is a destination where the family could easily load up and enjoy a pleasant day outing. In fact, one could easily stop for breakfast or lunch along the way with time to spare.

OK, thus far, the terrain we have been traveling pretty much appears normal, in comparison to the description I shared early on. But those who strike out on a short jaunt along the trails leading deeper into the midst of the towering pines are only seconds away from a setting that shows a striking resemblance to one of the World's Seven Natural Wonders. Hence the reason this particular spot is referred to as the Little Grand Canyon.

Don't get me wrong. This spot is hardly as vast as the real deal. In fact, one can easily whirl a rock across the shallow divide. And it is hardly longer than a regulation football field.

But I will have to admit that it does share at least a few of the visual characteristics of the terrain within the perimeters of the national park that draws folks to Arizona by the millions on an annual basis.

So is southern Arkansas' Little Grand Canyon a huge draw? Hardly. In fact, I have visited this particular destination four or five times throughout the years and seldom happen upon other visitors.

That being said, it sees far more traffic during the spring and summer months than it does during the winter. I have visited this location during pretty much all seasons, and have never been disappointed. However, it is important to know that the creek winding through the interesting formations is fueled by the aforementioned lake. In turn, the water level is somewhat determined by the amount of precipitation that has blanketed this particular section of the state. So it only makes sense that the creek is more impressive during the wetter seasons.

OK, let's strike out and see this miniature wonder first hand. It's hard to share an accurate description of the exact route to take, as several paths wind through the forest. However, they all tie back into each other and eventually lead to the same location. That being said, I would suggest striking out along and following the left most-beaten path as it parallels the distant creek.

The path will lead to a vista overlooking the anomaly shortly thereafter. In fact, one can actually access the water's edge via sliding down a steep path on their keister, at this point. But I would suggest remaining on the main trail, as it eventually leads to a much easier access point. In fact, the trail eventually makes its way down a mild ascent to the very base of the narrow pool that is contained by the interesting formations.

One can get an interesting perspective while standing atop the formations that they saw from the aforementioned vista. In fact, one will only be a few feet above the water level and will have a view up the channel of the small waterway.

One can easily see each of the small points jetting out into the creek from this point, as well as the various layers in the small geological formations. The water level was quite low during our recent visit lending to the opportunity to see the substrate. However, this was the first occasion when the water wasn't far too deep to see the bottom.

Although this particular section of the creek is most intriguing, there is yet another hole just downstream where I spent some time. But I wasn't remotely as interested in the scenery as I was in imagining what might transpire if one cast a small spinnerbait or chugger in the water during the spring and summer months.

Although the Little Grand Canyon is more than enough to beckon my return to this destination from time to time, there is yet one more spot worthy of exploration prior to returning back to the vehicle.

In fact, I always make my way back through this small section of property during my trek back to the rig. I simply follow the path back to the main trail and make a left-hand turn along a dim road.

Following the road for a short distance, I then take a right into a large opening. I am not sure if this is a borrow pit, from a previous project, or if it is a natural occurrence. But regardless, erosion has carved some interesting drainages into the substrate. And as it turns out, the opposing end of the clearing is literally within feet of where the journey begins.

I think it would be safe to say that the Little Grand Canyon is far different from the terrain that one is accustomed to seeing in the southwest section of Arkansas. And I'll be quick to agree that it is not even remotely as impressive as the nationally acclaimed gorge that cuts its way through Arizona.

However, I will suggest that it is a gem that is certainly worthy of visiting. In fact, this is a destination where I plan to return again during yet another excursion into Arkansas' West Gulf Coastal Plain Region. 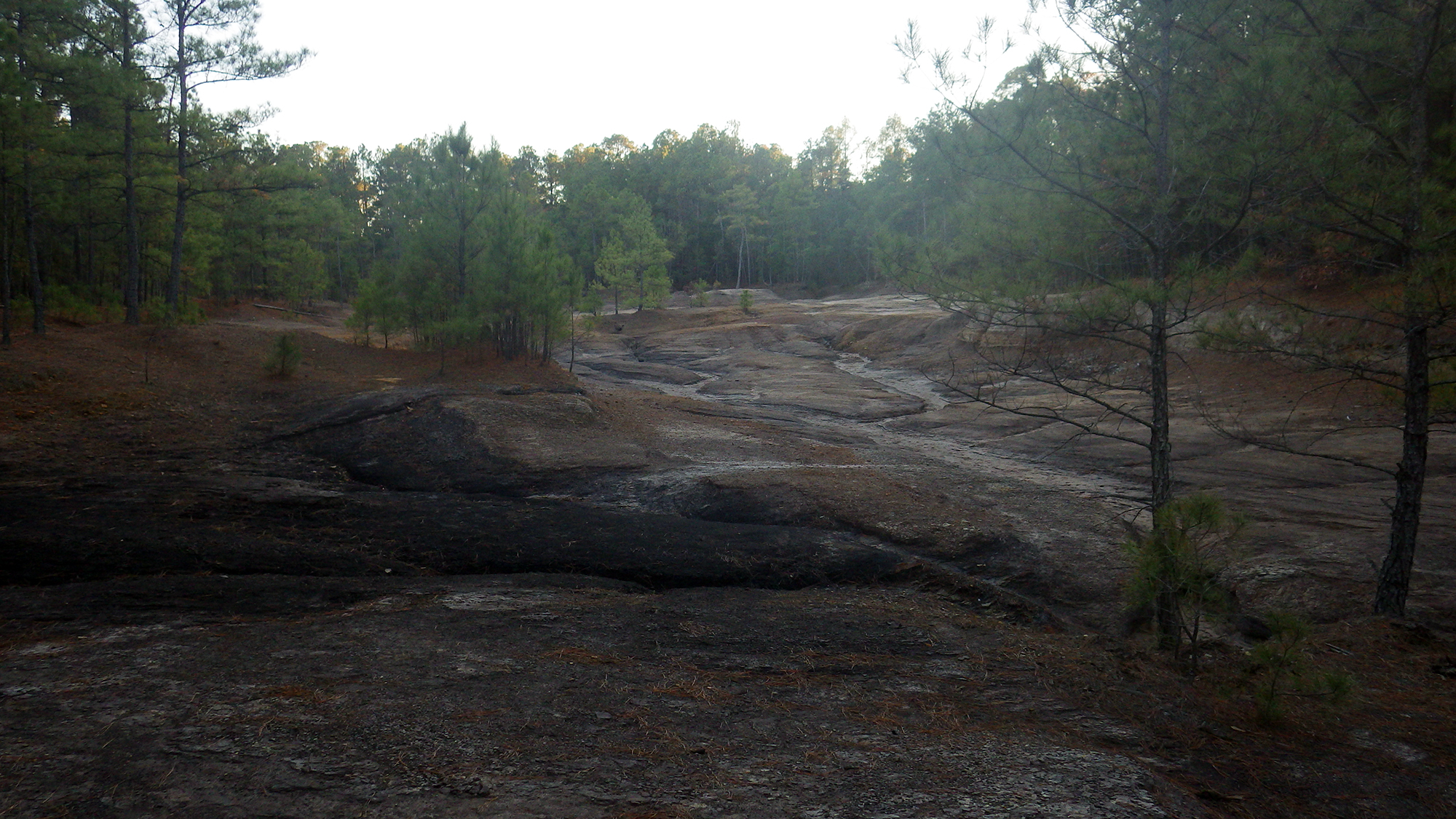 Although the Little Grand Canyon is the highlight of the suggested excursion, the large opening that is nearby also lends to an interesting scene. - The Sentinel-Record/Corbet Deary