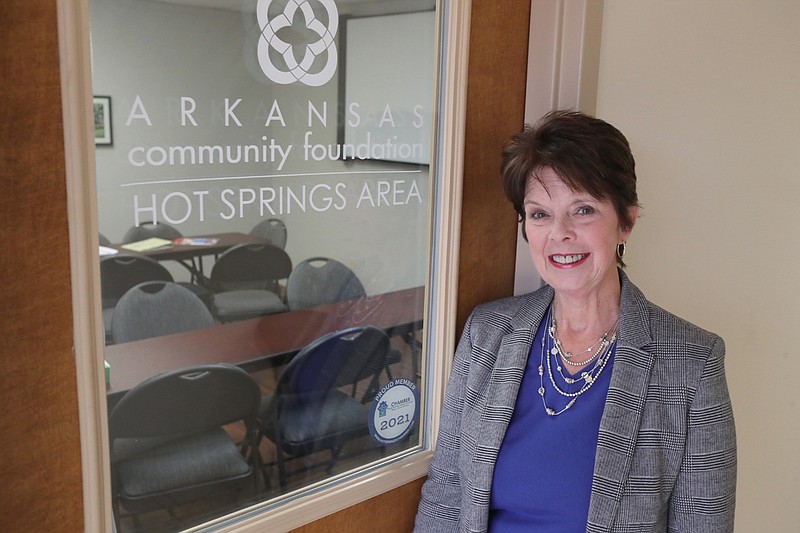 Joyce Whitfield, Hot Springs Area Community Foundation executive director, says experiences from her life and her faith have molded her into the person she has become.

"I was born and raised and grew up in Jonesboro," Whitfield said. "And back then Jonesboro was quite smaller than it is now. My dad and his brother owned a drugstore. It had been their father's drugstore. So we all kind of were raised in the Royal Pharmacy drugstore."

"I had three sisters; I was kind of in the middle there. I had two older sisters, and then a younger sister. And all of us kinda got to work behind the counter. And yeah, we had a soda fountain. So we made ice cream sundaes, and milkshakes and kind of had fun doing all that. When we got a little older we got to occasionally type some prescription labels for some prescriptions. It was kind of a neat way to grow up and to see a family small business go through the toil ... the struggles that the business went through. But then also the great relationships ... customers that became family and friends."

Whitfield said the fondest memories of the pharmacy "were the group of men who would come drink coffee every morning. They were telling stories and then not only them, but the employees. There was Nell at the counter who came up with a chili recipe, and Rosie who was at the cash register up front. She worked until she couldn't work any longer. Just folks like that who became members of our family," she said.

"We were open most of the year from 8 in the morning to 9 at night. A big part of the store was the soda fountain with the round stools and then all the pumps for the different sauces; the chocolate, the strawberry, butterscotch. The milkshake machine, where you had the little silver cup," she recalled.

Whitfield says being a part of the family business helped her learn to adjust when "life throws you curveballs. I think it made me appreciate the small business world. The peaks and valleys, you know, made an impression on me. Especially now even more so with so many businesses that have not made it. But the ones that have had that passion and that desire, and they've just have figured out a way to make it work."

That is what Whitfield says she does in her current role with HSACF. She has had to figure out a way to make things work.

"When COVID hit everything stopped ... shut down. We were all at home all of a sudden, and I got a call from Cole McCaskill at the Chamber of Commerce. And he had a friend who had started a program. It was a program where the small businesses were closed ... the nonprofits needed money. It ended up being a program where grocery gift cards were given to those who had lost jobs. And the small businesses were helped out by the members in the community who would buy gift cards for any kind of small business. It was a partnership.

"So I said, 'Well, let me talk to the Community Foundation in Little Rock and see if they'll allow us to do this.' And so I contacted our donors and other banks and other organizations in town. The goal was $25,000 that we would raise for seed money to help this. And then we contacted Kim Carter at CCMC (Cooperative Christian Ministries and Clinic). And she was the one that vetted all the applications for the grocery assistance cards. It was a partnership, and so we saw a way during the pandemic to just keep going. By early May, we already had this project going and ended up, I believe, we raised basically about $46,000."

Whitfield compared it to when her father's pharmacy was struggling and he added milk sales to compete with the local grocery stores.

"It was a step towards keeping the business going forward, getting people into that store. I learned endurance, with determination and commitment, to find a way. We were all thrown a curveball, and we had to figure out how to help others and find the resources. And that's my job, basically, to find those resources and bring that to the attention of my board members. Like 'Here's something we can do. And this is a great need. And here's a project that we'd like to do,' and then, you know, be the one to put the pieces together."

After graduating high school, Whitfield attended Arkansas State University and graduated with a degree in music education with a goal of teaching band at a public school.

"Which now is very interesting, because that is not at all what I ended up doing. I kind of beat myself up for several years, but finally came to the conclusion that that's really not that important."

Whitfield says she learned that getting her degree was about "going through the discipline, earning a degree, and all the other lessons you learned in pursuing a college degree," she said.

"I loved music. I was in band all the way from junior high and high school. We all looked up to our band director and music was important," she said, recalling, "I played the oboe. There was a great oboe instructor at Arkansas State University, Dan Ross, and I had taken lessons from him and really thought a lot of him."

After graduating from ASU, "I got married pretty quick. I had found that teaching and being a band director was really not what I wanted to do. And so I went to work in a bank in Jonesboro, Mercantile Bank, and just kind of started working my way up from the very bottom."

Whitfield worked in banking for 30 years and, in 1983, moved to Hot Springs.

"Banking was in my blood. I got really interested in mortgage lending and finished out my banking career helping people get into their first home or upgrade or remodel. That was very rewarding. And it was like working a lot of jigsaw puzzles, because you had all these pieces to put together."

Whitfield says she is still helping people put the pieces together and that's what she enjoys about her current role.

"They were looking for a new director. And this is a part-time position. It involves more work than a part-time position, but it's it is a rewarding job. I was intrigued by it. And again, it's another job that is like working a puzzle, because you put the pieces together.

"My job is to keep the foundation board moving forward and assisting nonprofits in the community and finding out where those needs are and being the boots on the ground to search for those needs. And, you know, it's like, 'Where should our money be placed to make the biggest impact and help the most people to just do right for our community?' So here I am again, with puzzle pieces, putting things together and it's just kind of the way my life has worked out," she said.