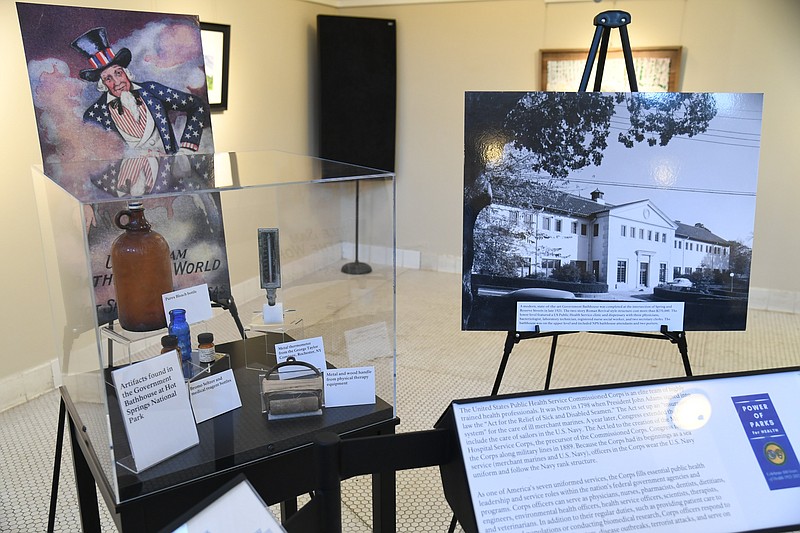 Artifacts from the Government Bath House at Hot Springs National Park are displayed in a temporary exhibit at the Ozark Bath House. - Photo by Tanner Newton of The Sentinel-Record

As the Hot Springs National Park Centennial comes to a close, the final part of the yearlong celebration recently opened at the Ozark Bath House which, for the next few months, is hosting an exhibit revolving around the U.S. Office of Public Health.

"The first four superintendents after we were made a national park in 1921 were all Public Health Service officers, and the exhibit is to commemorate their role in having a Public Health Service clinic at the Government Bath House, the fact that the bath house opened in 1921, and the partnership that continues to this day in making national park sites safe," Hill said.

"The role of the Public Health Service, working with the Park Service, started in Hot Springs. It's expanded to all national parks, so there are Public Health Service examiners and inspectors that will work with food service and water and sewage systems and all sorts of health-related systems in all national parks, but the whole idea started here in Hot Springs because of the Government Bath House," Hill said.

The Government Bath House was not located on Bathhouse Row, but further east at the intersection of Spring and Reserve streets. Hill said the building has been closed to the public for over a decade. The exhibit has some items from the building.

"These artifacts either came from the building or they are exact duplicates of what was in the building," he said.

Hill said the park has "put a new roof on it last year and we're going to be remodeling it in the coming two or three years, to have it made into adaptive reuse, but right now it's still empty." He said "not many people ever get to go in there" and it is rare for the public to get to see artifacts from the building.

Hot Springs National Park Superintendent Laura Miller noted this was the final event as part of the centennial celebration.

"We have had a great, great year. We have had to obviously abandon some of the things we wanted to do -- like it just didn't seem responsible to try to set a Guinness World Record for the biggest water-gun fight at the bathtub races -- so we're going to put that off till next year ... but a lot of other things we were able to do and really celebrate the anniversary," she said.

"This is your last celebration. This is our first celebration. We're celebrating our 100 years, the National Park Service and the United States Health Service," Newman said.

"We are here to protect and advance the health of the nation ... it is believed that the oldest agreement between two federal agencies to provide support to protect and support and advance the health of people started between the National Park Service and United States Public Health Service in 1921. So our office is elevating this, we are celebrating our centennial, and while Hot Springs is celebrating their 100 years and had a variety of activities, we just have not had the opportunity to do it, but this is our signature event, today with you," Newman said.

"Obviously we envisioned maybe a thousand people with the surgeon general, you know, because we thought that would be great, and two years ago we were starting to plan this and then something hit us that was unexpected, and that's why we are all wearing face covers," Newman said to a crowd of around 40 people.

Newman said she is "so proud to be here to celebrate this 100 years, and be here in Hot Springs National Park because Hot Springs, it really symbolizes so much for us in the United States Public Health Service and the National Park Service."

In an interview after the presentation, Newman praised the national park exhibit.

"I love it, I was so honored and just surprised how beautifully it was done," Newman said.

She also noted this was her first visit. "I had no idea what it was. I thought bath houses, and that was it. It has such a rich history, and stories to tell, not to mention places you can actually hike and enjoy. It has it all. I can now understand why they call it a destination park. It's phenoms. I can't wait to bring my family back," she said.

As far as the centennial, she said, "Our dream envisioned last year was so much more than we could have done but I think considering the circumstances and the situations that we were in, you know, we were able to host five in-person events, now six in-person events and then we had our two year-long events taking place, all of which were tremendously successful," Waymouth said.

Newman presented challenge coins to several people in attendance, including Hill and Waymouth.

"Oh, it was so unexpected. I was totally caught off guard, but that's really sweet. Both Tom and I, and even Laura, the three of us have put a lot of work into making sure that this exhibit opening was everything that it was, so it was really lovely and sweet to be recognized," Waymouth said.

The exhibit will be open on Saturdays and Sundays from noon to 4 p.m., as long as the Friends of Hot Springs National Park has enough volunteers, Waymouth said, adding "so if you want to volunteer, if you're looking for some hours, I know they'd love to have you." 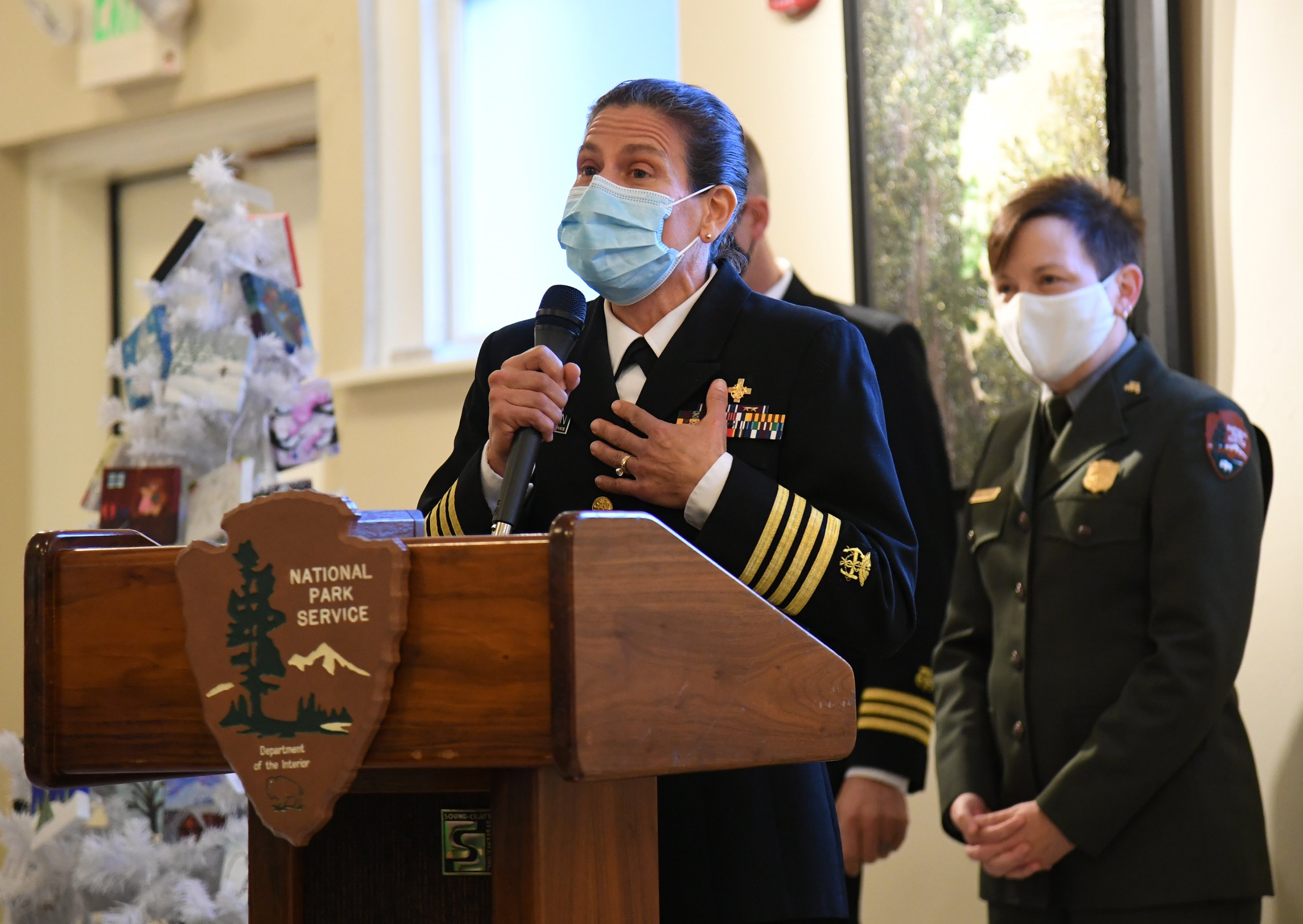 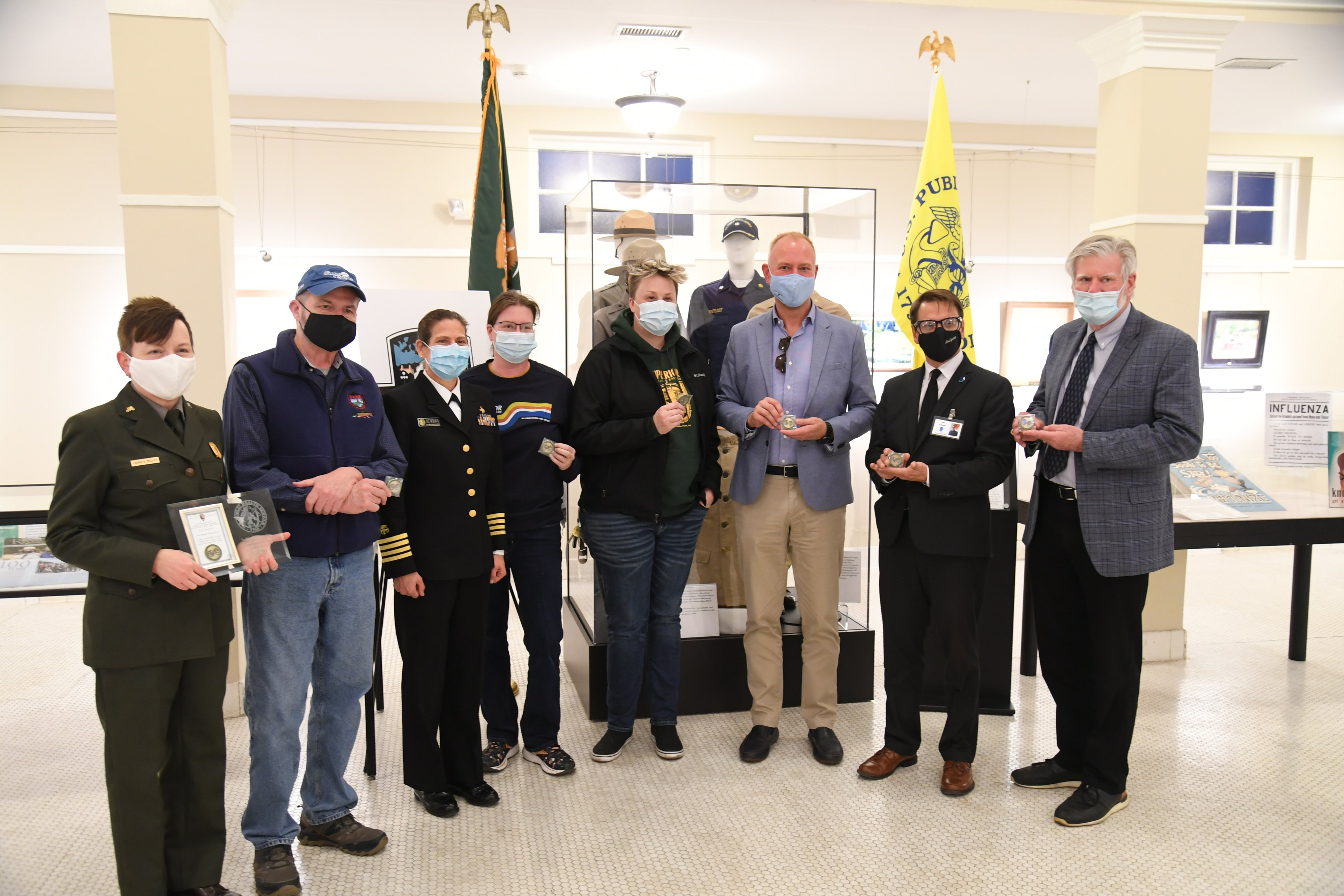 U.S. Public Health Service Capt. (Dr.) Sara Newman, third from left, stands with the recipients of challenge coins on Dec. 8 during the opening of the new temporary exhibit at the Ozark Bath House. - Photo by Tanner Newton of The Sentinel-Record