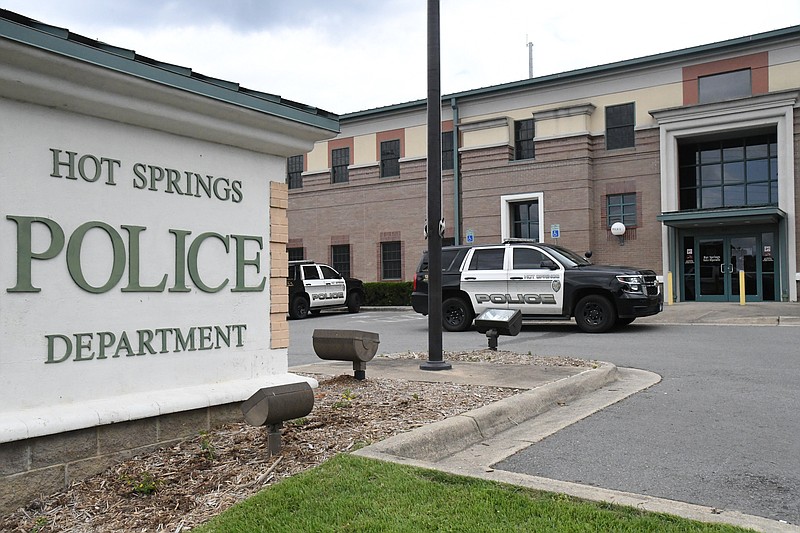 The exterior of the Hot Springs Police Department. - File photo by Tanner Newton of The Sentinel-Record

Shots-fired calls reported to the Hot Springs Police Department through 911 often leave officers casting about for the proverbial needle in a haystack.

"Here's how that 911 call comes in," Police Chief Chris Chapmond told the Hot Springs Board of Directors Tuesday night. "'123 Main St., I heard gunshots. Where did you hear them from? Well, they were somewhere in the neighborhood.' So what does that make us do? We're turning corners. We're looking for something that we don't know where it's at."

ShotSpotter Inc.'s wide-area outdoor gunshot detection, location and forensic analysis service that went live in the city in June can pinpoint the exact location of gunfire, often putting officers on the scene in time to find the perpetrator holding the weapon that set off the detection system.

ShotSpotter licenses the technology to the city. Since June, it's detected more than 700 active gunshot incidents and more than 1,900 rounds fired in the 2-square mile area where its acoustical sensors are deployed. The board voted Tuesday to expand the city's license to additional 2 square miles, giving the city 4 square miles of coverage in the roughly 33 square miles of the city's incorporated area and increasing the cost of the annual license to $199,000.

"In these areas that are covered, we're getting that alert sent straight to the police officers," Chapmond, noting that fewer than 30% of shots fired calls are reported to 911, told the board. "We don't have to depend on the 911 call."

He said since June, 400 shots-fired incidents have come from areas not covered by ShotSpotter. The additional 2 square miles will include the majority of those areas. Chapmond said it's contiguous to the existing coverage area.

"All four borders touch each other in some form or fashion," he told the board. "If our data supported we had something that wasn't contiguous, we could build it out in that area, as well."

Detectives follow-up on ShotSpotter alerts, as the responding officer doesn't always have time to gather evidence at the scene or talk to witnesses. Chapmond said using "good old-fashioned police work" to leverage ShotSpotter and the department's other technology is part of the holistic approach to policing he's implemented since taking the reins of the department in the summer of 2020.

"It's dark, cold, and they've got calls sitting on their screens," he said. "They can't find the shell casings. The next day our violent crime detectives go out during the daylight. Using metal detectors, talking to neighbors, we're able to go ahead and verify a lot of those shots fired by secondary follow-up."