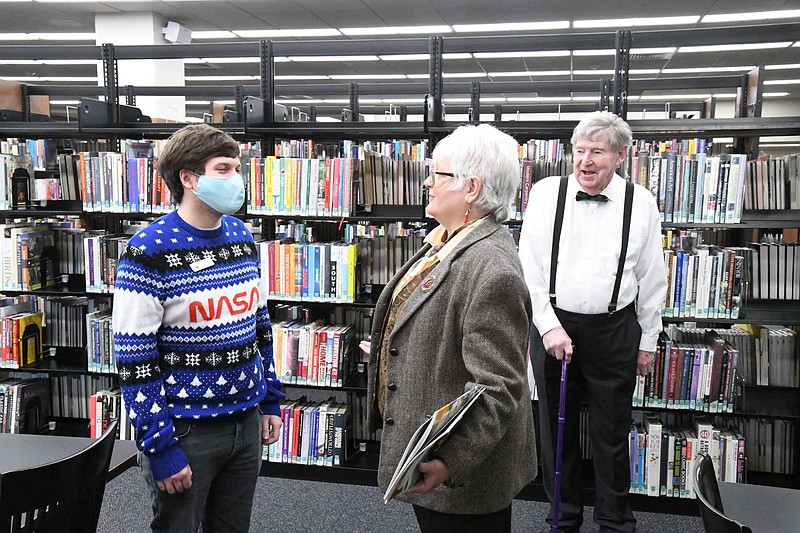 Paul Kagebein, Garland County Library’s adult services programmer, left, speaks with Millie Gore Lancaster as Phillip Wilson listens. A conversation between Kagebein and Lancaster a couple of months ago led to Lancaster and Wilson donating a combined $10,000 to the library to help get a bookmobile. - Photo by Tanner Newton of The Sentinel-Record

EDITOR'S NOTE: This is the first installment of a two-part series regarding the Garland County Library's bookmobile project.

Thanks to a recent donation from two authors, the Garland County Library's bookmobile is now fully funded and expected to be at the library in 2022.

Millie Gore Lancaster, a local writer, recently learned the library was $10,000 short of being able to get a bookmobile, so she and her writing partner, Phillip Wilson, each donated $5,000 to help the library reach their goal.

Lancaster said she met Wilson when she was 11 and he became her music teacher. She would follow him into education, spending 36 years as a teacher. She lives in Garland County, and Wilson lives in Tucumcari, New Mexico.

A lifelong love of libraries, and several book projects, led Lancaster and Wilson to make the donation.

"On my 47th birthday, I spent two hours on the witness stand in federal court. The city of Wichita Falls had passed a book banning law saying that any book in the children's library that was objected to by any 300 library cardholders would be banned from the children's library and I joined a group called the Wichita Falls Coalition Against Censorship and we brought suit against the city," Lancaster said.

"I was certified by the federal court as an expert witness in manners related to children and books and gay and lesbian issues. I happen to be straight, which is neither here nor there, but because I was a multicultural education professor, and one of the things I taught about and lectured about across this country and Europe was supporting LGBTQI adolescents with disabilities and the coming out process and supporting young children whose parents are gay or lesbian, so I was made an expert witness in federal court," she said.

Lancaster said this led her to researching children's books to see if there are any depicting same-sex parents and she discovered how few of them existed.

"So I waited for somebody to write one and Maya Angelou said, 'If you can't find the book you want to read, it's your job to write it,' so I contacted my like-a-dad, Mr. Wilson over in Tucumcari,'" she said.

The two wrote "All Is Assuredly Well," a children's book about two married kings. It took them seven months and co-writing the book was "the impetus for my love affair with libraries," Lawrence said.

"My dad's law office was right across from the library, so I never needed a bookmobile, I had constant access to books, but I loved libraries," she said. "I really fell in love with them during that two hours on the witness stand when I found myself defending them from bigots who believed that they had the right to tell libraries what they can have on their shelves and that's when I really became deeply devoted to libraries."

As for how she ended up making her donation to the library, Lancaster said two things happened: She was working on a collection of short stories called "Short Stories for Arkansas Girls," and then a mobile home park owner asked her to read his manuscript for his memoirs.

While visiting the Garland County Library recently, Lancaster told Paul Kagebein, the library's adult services programmer, about the story she was writing.

"I said 'Let me tell you about my latest story that I'm getting ready to write for 'Short Stories for Arkansas Girls.' It's about a little girl in a mobile home park who wants the bookmobile to come to her mobile home park.' and Paul kind of looked very strange," she said.

Kagebein told her they were going to have a bookmobile, but lacked $10,000 reaching our goal and asked her, "'Can you think of any way you can help us on that?'" she said.

"And all of the sudden, in my mind, I said, 'OK God, I hear you, I get the message,'" Lancaster said, and she decided to give $5,000. "That night I called Maestro Wilson, in New Mexico, and I said 'I'm not asking for your blessing, I'm just going to tell you what I'm going to do,' and I told him about my encounter with Paul," she said.

"I just knew, I'm supposed to give them $5,000, and I just thought I would tell you that," Lancaster said she told Wilson.

When asked why a resident of Tucumcari, New Mexico, gave $5,000 to a library in Arkansas, Wilson said, "Why not?"

"Ever since my wife passed away, and ever since my family has grown up and moved on, established their own homes, I've begun to develop at last, because we never had any access when we were raising kids, not with seven of them and not on a teacher's salary, and one income," he said.

"My brother told me long, long time ago, he said, 'Be watchful of your pennies and the rest will take care of itself, and he was right, and he said, 'As you get older, you'll have a little bit more left over at the end of each month if you're watchful,' and he's right, and I found myself with a lot left over," Wilson said.

"I told my kids I'm building something to leave for you. 'Dad, you don't owe anything. Use it, enjoy it, have fun with it. You don't owe us anything.' Very well, I don't owe them anything. So you're the beneficiary of that comment from my children, and I love libraries too," Wilson said to Adam Webb, the library director.